Free STD Testing in the State of District of Columbia

There Are 338 Public Clinics & 181 Private STD Clinics Near You

If you're looking for cheap std testing clinics in the state of District of Columbia to get a HIV, Herpes, Chlamydia, Gonorrhea, Syphilis or Hepatitis screening for yourself or your partner, you can get tested today by selecting an option below to find an affordable std test clinic near you. Same day std testing locations also available with results in 1-2 days. Learn more here.

What are the STI test options in District of Columbia?

While walking around Washington D.C. you can catch a Capitals game, head to the Washington Monument, or visit the White House. Before you go exploring our nation’s capital, it is important to stop by one of the city’s many STD Clinics to get yourself tested. While many believe they are practicing safe sex, it is still important to get tested regularly. Alarmingly, the district has one of the highest rates of Chlamydia, Gonorrhea, Hepatitis B, C, Herpes, Syphilis and HIV in the country. You can find free STD testing centers in D.C. These facilities often come with long lines, but there is an easier way to get tested. You can easily schedule private STD testing with a phone call, and only spend 15 to 20 minutes at a nearby lab. This way you’ll still have plenty of time to tour the nation’s capitol.

Clinic. This is a concierge medical practice. There is an annual fee

Clinic. Patients of the practice have off-hours (24/7) access to phone- and video-based support

Clinic. Self-pay subscription available to those without insurance; visit website for information

. HIV/STD testing is open to the general public

Community Based Organization. HIV testing available to the general public; for other services you must enroll as a patient in order to receive services

Clinic. Note: No walk-ins after 5pm. Saturdays by appointment only

. New patients without a medical home

Not Sure Which Option Is Best For You? Let us point you in the right direction for STD testing in , DC

STD Statistics for the State of District of Columbia

Statistics reported is based on publicly available data sources such as CDC for DC. Data is normalized to accurately report District of Columbia STD Breakdown. Demographic breakdowns are based on STD reporting available at the state level.

According to recent reports, the D.C. area has a shocking amount of STD cases. Over 570 cases have been reported for every 100,000 residents. The data shows that these rates have been increasing for people between the ages of 20-30. If you are sexually active and you live in the area, it is important that you ensure your health as well as the health of your sexual partners.

Education about safe sex practices can go a long way, but testing is a necessary component of keeping any community disease free. Without adequate testing, it’s impossible to control potential outbreaks of sexually transmitted diseases. If more people become aware of their own STD status, it can create a culture of responsibility that will greatly benefit the sexual health of residents in the area.

Adolescents and young adults are often shy to seek information about testing. You can help combat the stigma by being proactive about sexual health and STD clinics. The resources are readily available, it’s up to you to take the initiative. If everyone makes a concentrated effort, the number of infected individuals will continue to fall over the next few years.

In addition to having high chlamydia rates, these rates have only slightly declined over time. Education and testing can help these rates fall faster.

The gonorrhea rates have hardly fallen at all over time. While there were year-to-year declines in rates, the overall trend is stagnant. Increased STD testing is the only way to fight back.

STD Testing and Sexual Education in District of Columbia

STDs are significantly more prominent in teens, and adults under the age of 25. While the number of AIDS patients is decreasing in the area every year, gonorrhea and chlamydia are still running rampant. It is only through better sexual education that you can prevent younger members of the community from contracting and spreading these diseases.

The data shows there was a slight decrease in the number of these diseases per year until 2010. At that point, both diseases saw a sharp increase in their rates of transmission and total number of occurrences. One reason for the increase in STD rates is thought to be due to cuts in health care and education. This has resulted in an even greater number of teens graduating high school without the tools and information they need to protect themselves from sexually transmitted diseases.

Teens and young adults often do not know that regular Herpes testing in D.C. is the best way to prevent the spread of the contagious virus. Regular HIV testing in D.C. is also vital for everyone’s continued good health. The simple procedure only takes a few minutes, and it could help save your life.

Sexually Transmitted Diseases and Demographics in District of Columbia

Analyzing demographics is important when tracking STD rates in specific areas. The capitol city has a thriving and diverse city center with a variety of  factors contributing to its STD problem. Poverty issues stemming from class and racial division have caused outbreaks to become unfortunately common in certain neighborhoods within the city.

There is also a significant disparity between genders when looking at data for the district and region as a whole. Females are significantly more likely to contract Chlamydia, while men are twice as likely to test positive for Gonorrhea. Additionally, STDs are disproportionately more common in African Americans when compared to other races.

This data is startling, and it does indicate that there is a problem with STDs in the metro area. A significant contribution to the STD rates is poverty. As a whole, there are many more African Americans below the poverty line in Washington D.C. Without equal access to affordable treatment or sexual health education, it’s difficult for these low income communities to protect themselves from STDs. As education efforts increase local leaders are hopeful that more residents will start getting tested, and that the infection rates will begin to decrease.

D.C. has always struggled with issues that are contributing to its high STD rates, and until they are resolved the community will continue to be at risk. 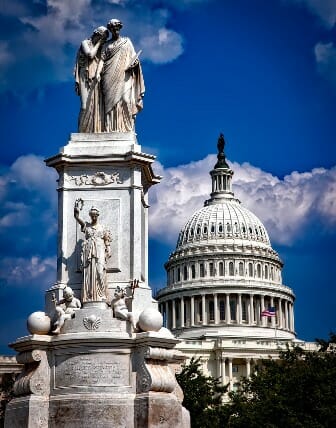 It has become impossible to ignore the high STD rates in the nation’s capitol, and this means that it is important for everyone to take care of their sexual health. It can be hard to find time to spend at a local STI clinic, especially when the wait could be for hours. If you are looking for an easier way to take responsibility for your sexual health, you do have other options. You can call to schedule confidential STD testing and only spend a few minutes at a participating lab of your choosing. This way you get get tested, and still have time to enjoy a day on the square.