There Are 8 Public Clinics & 3 Private STD Clinics Near You

Situated on the Mississippi, Davenport has such varied features as art from the 15th century to ski resorts and casino entertainment. It’s also located in the 40th most sexually diseased state in the country.

If you're looking for cheap std testing clinics in the Davenport area to get a HIV, Herpes, Chlamydia, Gonorrhea, Syphilis or Hepatitis screening for yourself or your partner, you can get tested today by selecting an option below to find an affordable std test clinic near you. Same day std testing locations also available with results in 1-2 days. Learn more here.

COMPARE TESTS AND PRICING
FIND A CLINIC IN Davenport

What are the STI test options in Davenport,IA?

Although relative STD rates in the region are lower than the national average, the area still reports increasing numbers of sexually transmitted diseases. Scott County reported 900 cases of chlamydia, 112 cases of gonorrhea, and 36 cases of syphilis in 2014. Along with these numbers, Scott County’s HIV rates are ranked as the third-highest in the state.

It’s estimated that almost 200 residents across the county are currently living with HIV.

Many tests now exist that can give same-day results for STDs. Fortunately, this means that within the same day one can get tested and obtain any information or prescriptions that may be needed for a positive diagnosis or to prevent future exposure. Events throughout the year spread awareness and promote safer sex practices and preventative measures, along with regular testing and treatment services.

Davenport offers testing location options for those who make their sexual health a priority. From the Scott County Health Department on West 4th Street to the Community Health Care Incorporated on West River Drive and Edgerton Women’s Health Center on East Rusholme Street a quick search will help you find a testing center, along with options for free STD testing.

Public Health Department/Social Services Department. Must be a Scott County resident for STD testing and an Iowa resident for HIV testing. Proof of residency will be required at the time of visit. HIV testing available to those with specific risks and those risks can only be determined during the pretest counseling session. A $10 donation will be requested, but not required for services

Must be an established patient to receive HIV and STD services

Anyone age 13 and older can get tested

Not Sure Which Option Is Best For You? Let us point you in the right direction for STD testing in Davenport, IA

Statistics reported is based on publicly available data sources such as CDC for Scott County, IA. Data is normalized to accurately report Scott County STD Breakdown.

To be fair Davenport is considered part of the Quad Cities and this is contributing to its high STD rate, but the fact remains that a large percentage of residents are infected or being treated for a sexually transmitted disease.

What is so frustrating for many health officials is that these statistics are not new, and that the number of sexually transmitted diseases reported annually has been increasing for more than twenty years. While HIV/AIDS and Syphilis were diseases that created a health crisis in the 1980’s, the CDC is now stating that these and the other commonly transmitted viruses are still putting residents’ health at risk.

According to the recent statistics Gonorrhea and Chlamydia rates are decreasing slightly down 45 cases between 2010 and 2014, but Syphilis rates have tripled in the same four year period. In 2015 the CDC also reported that the county had the third highest HIV rate in the state.

The statistics also show that it is no longer teens and young adults who find themselves with the greatest risk, but older residents are testing positive for a sexually transmitted disease more often. The recent data also shows that young women are almost twice as likely to contract Chlamydia as men, but Gonorrhea rates are increasing in males. Even as the recent statistics show that some percentages are improving, overall the city still has a serious problem with its STD rate. Some of the statistics that should concern residents include, 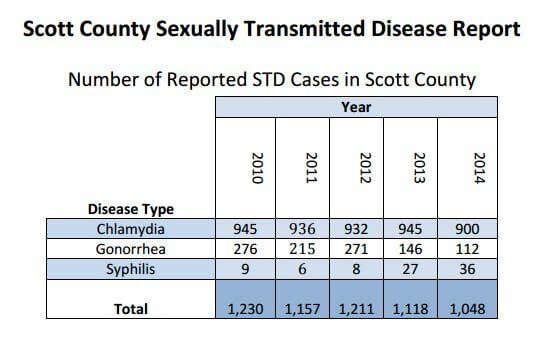 Like many other states across the nation, Iowa allows each public school district to create its own sexual education programs. The only requirements are that it should promote abstinence, and include current medically accurate information regarding the spread of HIV. With the curriculum undefined, it is not surprising that residents in this quad city are struggling with a high STD rate.

Students are often unaware of how all STDs are spread and while some do receive information regarding the use of contraceptives, most do not understand how important it is to be tested regularly even if they are not sexually active.

Some school administrators point to the falling Gonorrhea and Chlamydia rates, but health officials note that these are not the statistics from this year and the number of those infected could have risen significantly. Once again health officials stress that unless everyone receives the information they need to adequately protect themselves the STD rate for the city will never be completely under control.

This includes understanding that regular Herpes testing in Davenport is important, especially for high school students who are the most at risk. Regular HIV testing in Davenport is also crucial for everyone’s continued good health, and this simple procedure remains the only proven method for detecting this potentially deadly disease.

As one of the quad cities Davenport has a diverse demographical makeup that makes it a great place to live, but this is also contributing to its high STD rate. The community is also conservative, and this is making it difficult for health officials to implement comprehensive sex education classes in the area’s public schools.

It is this lack of education that is one of the biggest contributors to the spread of STDs. Not only do teens and young adults not understand the risk they could be putting themselves in, many have misconceptions about how these diseases are actually spread. Some students recently polled actually believe that drinking and eating foods that contain high amounts of Yellow Dye #5 will not only prevent pregnancies, but it can also protect them from STDs. It is beliefs such as these that is causing the spike in certain sexually transmitted diseases.

Older residents are also finding that they are testing positive more often. Many are dating longer than previously, and it is not uncommon for seniors to still be sexually active thanks to improvements in health care. While this is good news for them, it is also putting them at an increased risk for contracting a sexually transmitted virus.

Until everyone in the area understands the risk sexually transmitted diseases can have on their health, and even on their lives the number of those that test positive each year will continue to rise.

Before you head out on the Mississippi River or over to Credit Island it is important that you stop in at a community health center for a STD test. If you don’t want to waste your day standing in a long line, you can schedule confidential STD testing with one quick and easy phone call. This way you only have to spend a couple of minutes at a nearby lab taking care of your sexual health, and this still gives you plenty of time to enjoy the rest of your day in the quad cities.

Other Cities Near Davenport, Iowa