Free STD Testing in the State of Montana

If you're looking for cheap std testing clinics in the state of Montana to get a HIV, Herpes, Chlamydia, Gonorrhea, Syphilis or Hepatitis screening for yourself or your partner, you can get tested today by selecting an option below to find an affordable std test clinic near you. Same day std testing locations also available with results in 1-2 days. Learn more here.

What are the STI test options in Montana?

Often recognized for have unique national parks such as Yellowstone and Glacier Park, Montana offers a unique perspective on wildlife and its hidden beauties. Residents within the state also partake in the wide array of evening events which are offered throughout the state. While enjoying all that Montana has to offer, it’s important that you check your sexual health periodically by taking an STD test. Unfortunately, much like many other states, Montana is seeing an increase in HIV, Herpes, Gonorrhea, Syphilis, and even Chlamydia. The state offers free testing for its residents at a number of locations throughout the state, making the checkup a simple and easy experience. Doing so will help keep you safe against the rising rates of STD’s.

. Access to services at the Leo Pocha Memorial Clinic is not limited to Native American clients. For non-native clients, a sliding fee scale is used to determine fee for services received at the Helena Indian Alliance

Public Education Department, Social Service Organization. If you are uninsured, you may qualify for a state-funded program or a lower fee scale. Fees for services are based on your household income. You will not be turned away because of your inability to pay

Not Sure Which Option Is Best For You? Let us point you in the right direction for STD testing in , MT

STD Statistics for the State of Montana

Statistics reported is based on publicly available data sources such as CDC for MT. Data is normalized to accurately report Montana STD Breakdown. Demographic breakdowns are based on STD reporting available at the state level.

just like many other various locations throughout, the United States, the state of Montana is experiencing heightened number of STD cases including gonorrhea, chlamydia, and even syphilis. Recent reports reveal the details of the rising number of cases, which is hoped to shed light on combating this issue.

The Center for Disease Control and Prevention recently released its annual Rates of Reportable STDs among Young Individuals Between 15-24 throughout Montana, breaking down sections of the state by their respective counties. According to this report:

The report made it clear that the most severe STD in Montana was Chlamydia. Additionally, this health profile also compared the statewide averages to the national averages in terms of chlamydia, gonorrhea, and syphilis rates.

Although the state doesn’t seem to be a major contributor to a rising number of STD cases found throughout the country, the state is at risk of increased cases from nearby states.

Even more recently, in 2014, the Montana Department of Health and Human Services released its communicable disease report, offering extensive statistical information to provide additional information. Although this report did touch on more than just sexually transmitted diseases, the report contributed a significant portion on the topic.

From 2004 to 2014, the chlamydial case has sharply increased, from a mere 281 to over 400 within 10 years. Oddly enough, even though Montana is experiencing a sharp increase in chlamydia cases, it remains lower than the national average, at a rate of 446.6 out of 100,000 individuals. Although jumping from year to year the rate may look like its decreasing, the rate is abruptly positive.

Similarly to the trend of chlamydia, Montana is seeing an even more exponential growth in gonorrhea. Between the years 2004 -2006, it appeared that the number of gonorrhea cases was steadily growing. From 2006-2008, it appeared that the state and its public officials were able to effectively control this disease. In 2011, the rate for gonorrhea in Montana was a total of 8. However, each year moving forward, the number exponentially increased. In 2014, the number reached a new high, a rate of 43. The U.S. average rate for gonorrheal incidences was 106.1 in 2013, and it appeared that Montana was quickly approaching this rate. 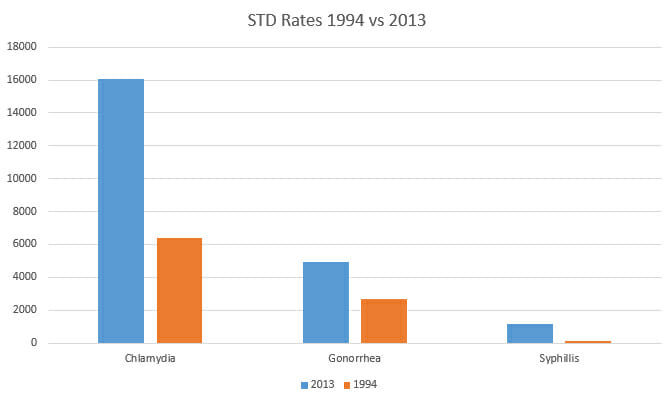 The state of Montana offers a wide array of resources to educate its residents about sexual health, STDs, and prevention strategies. For example, if you wanted to learn more about this topic, you could easily find a number of resourceful articles and statistical reports on the Montana website. Further, if you preferred, there are a number of physical pamphlets and brochures that are freely available in a number of health centers and clinics throughout the city.

Additionally, the city extensively covers the topic of sexual health within the public education system once students become of age. Within this class, students learn about STD’s, safe sex practices, and free resources provided by the government.

Within the 2014 Montana Department of Health and Human Services report, a finding revealed that individuals between 15-19 and 20-24 contributed a huge amount towards the state’s overall chlamydia rate. Even more specifically, women remained significantly more at-risk than males.

Although the state is populated with a diverse set of individuals with unique ethnicities, heritages, and personalities, the 2014 Edition Montana Health Profile pointed out that some individuals were at a larger risk of contracting sexually transmitted diseases than others.

The report outlined the exponential growth for risk for sexually transmitted diseases (specifically gonorrhea) along with a few other races. In the four year period from 2010 to 2014 American Indians had the dubious distinction of becoming the most at-risk race for gonorrhea in the state. The second-most at-risk race appeared to be Caucasians.

Within the community, there have been suggestions to teach sexual education to students at younger ages. Additionally, many feel that a public awareness campaign is needed to educate Montana’s residents about sexual health and free STD testing throughout the state. 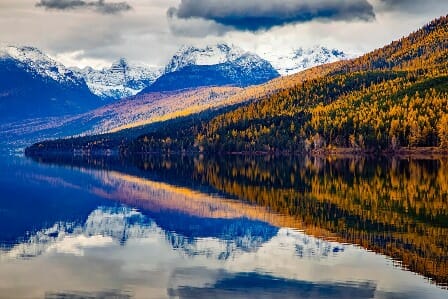 Although Montana is a beautiful state and is often regarded as a home to many, the state is experiencing an elevated rate of STDs. The community and public officials have done their best to further educate the population and teach safe sex strategies, but it’s apparent that more needs to be done. By providing free information and offering free services towards the most at-risk individuals within the community, many hope this will contribute to lowering the rate within the state.

In order to keep yourself healthy and aware, it’s always a good idea to frequently undertake a sexually transmitted disease test. The state provides free STD testing throughout a number of clinics around the state and a wide array of private clinics offer the same service with expedited test results. No matter where you take your test, it’s important that you do your fair share to help reduce the increasing rate of STDs throughout the nation.