There Are 7 Public Clinics & 3 Private STD Clinics Near You

Nestled in northern Utah County, Orem, Utah goes by the slogan “Family City USA.” Whether you have dreams of starting your own family or not, be sure to safeguard your health and fertility by getting tested regularly at a clinic near you.

If you're looking for cheap std testing clinics in the Orem area to get a HIV, Herpes, Chlamydia, Gonorrhea, Syphilis or Hepatitis screening for yourself or your partner, you can get tested today by selecting an option below to find an affordable std test clinic near you. Same day std testing locations also available with results in 1-2 days. Learn more here.

COMPARE TESTS AND PRICING
FIND A CLINIC IN Orem

What are the STI test options in Orem,UT?

Just a short jaunt south of Salt Lake City, Orem is the fifth largest city in Utah and home to a high population of followers of The Church of Jesus Christ of Latter-Day Saints. In fact, Time Magazine once named Orem as a top-rated place to live for spiritual well-being. Yet even a chaste community like Orem is at risk with STD rates on the rise.

Matching nationwide trends, more cases of chlamydia are found to be in the young women of Utah County. For gonorrhea, the Orem area showed 39 new cases per 100,000 in 2017 with the majority of those cases also found in more women than men. As far as primary and secondary syphilis, numbers remained low for Utah County with only 2 new reported cases that year.

If you’re looking to get tested in the Orem area, there are a few affordable options you should be aware of. Planned Parenthood on 1086 North 1200 West offers appointments to walk-ins without symptoms. They can do rapid testing for HIV (results in as little as 20-30 minutes). They offer STI screening and treatment of the following: herpes, bacterial vaginosis (BV), genital warts, syphilis, trichomoniasis, chlamydia, and gonorrhea. They also offer STD prevention (condoms, vaccines, etc.) as well as education. For a chance at free STD testing, you may need to pick a day off to drive into Salt Lake City and look around. Most public clinics aren’t open on weekends, so plan your trip in advance and be prepared for longer wait times.

To find the best services and location for you, use our search tools below to compare location features across Orem clinics with our easy-to-read chart.

Hospital. Please be advised, medication for the treatment of Hepatitis B,C and HIV and maintenance monitoring is possible. However, if the disease course is complex and/or end stage, patients will likely be referred to an Infectious Disease specialist

Not Sure Which Option Is Best For You? Let us point you in the right direction for STD testing in Orem, UT

Please use the map to find a public clinic in Orem, Utah
GO TO CLINIC LISTINGS ABOVE
0
People, On Average, Visit This Site From Utah Every Month
0
People from Utah, On Average, Take Action For Their Sexual Health

Statistics reported is based on publicly available data sources such as CDC for Utah County, UT. Data is normalized to accurately report Utah County STD Breakdown.

It has become impossible for health officials to ignore the rising STD rates, especially among the city’s young adults. Statistics released by the CDC and Utah County Health Department indicate that the number of sexually transmitted diseases is rising each year, and has been for the past two decades.

The statistics show that over the past ten years Gonorrhea rates has risen significantly in teens and young adults, and this includes men and women. One county health department officials went so far as to say that there area is in the middle of a “serious Gonorrhea outbreak”. Chlamydia diagnoses are also on the rise, especially in young African American and Hispanic women. As of 2014 the Chlamydia rate for the area was reported at 167.6 per 100,000, and health officials expect this to continue to increase unless residents start taking responsibility for their sexual health.

When it comes to primary and secondary Syphilis rates the statistics do indicate that the number of reported infections is decreasing. This also seems to be true across much of the state. An increase in public awareness is being credit with helping to lower these rates, though residents still need to be tested for all STDs on a regular basis if they want to prevent this sexually transmitted disease from infecting others.

Unfortunately HIV/AIDS diagnoses are up in the city and county, and this only shows how important it is to visit a STI clinic. Some of the other statistics that highlight the importance of testing include, 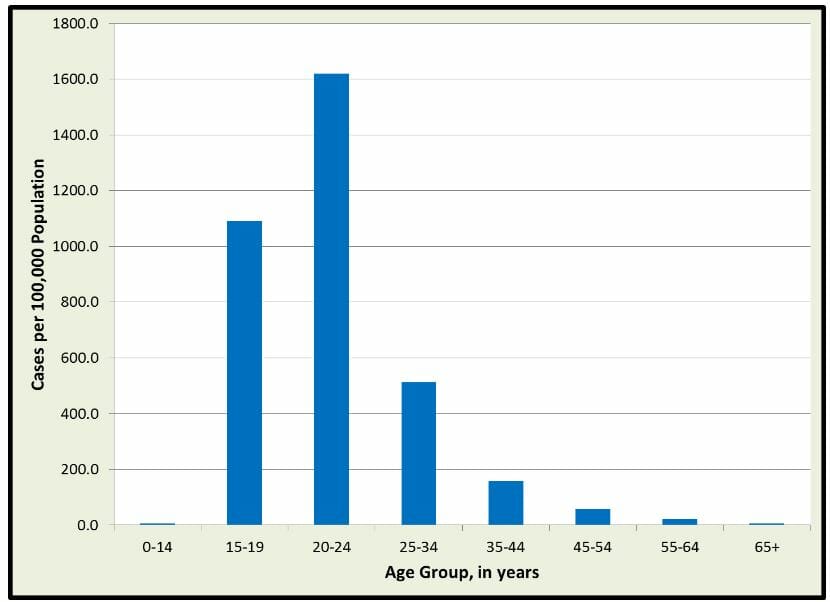 Even though statistics show that the number of STDs reported each year is rising, state lawmakers still vetoed a bill that would have required all public school districts to provide students with medically accurate and comprehensive sex education classes. Instead lawmakers overwhelming voted in favor of keeping abstinence based programs in the schools, even though statistics show that this is putting everyone’s health at risk.

Studies across the county show that when teens have access to the information they need to protect themselves from STDs, the number of infections reported each year dramatically decreases. This is also true regarding teen pregnancy rates, which are also rising across the state.

There are several reasons why the number of STDs reported each year keeps rising, but the main one remains a lack of education. Studies show that students are engaging in sexual activity more frequently, and at a younger age, and this is also made evident by the city’s high teen pregnancy rate.

Teens and young adults are not receiving the information they need to adequately protect themselves. While using protection during sexual activity is briefly covered in the classroom, students are still taught that abstinence is the best way to prevent STDs. They are not told how easy it can be to contract a sexually transmitted disease through other methods, and many students are not even sure how to properly use a condom. Most teens also graduate without understanding how important it is to be tested on a regular basis.

The city is staunchly conservative, and this does make it difficult for residents to have open and honest discussions about their sexual health. Some adults will even avoid testing simply because they are afraid that they might run into someone they know. The stigma that still surrounds sexually transmitted diseases has made it all but impossible for many residents to admit that their sexual health might be at risk.

Until these and other problems are resolved in this small city, residents can continue to expect to see high STD rates each year.

Often referred to as “Family City USA” it is hard for many residents to accept the fact that they are currently dealing with a growing STD crisis. The number of infections reported each year is rising, especially in teens and young adults. If is understandable if you don’t want to standing in the long lines at the STI clinics, and now you don’t have to. You can make one simple phone call and schedule confidential STD testing at a conveniently located lab. This way you can still take care of your sexual health without the fear of running into a familiar face.

Other Cities Near Orem, Utah