Free STD Testing in the State of Vermont

There Are 85 Public Clinics & 4 Private STD Clinics Near You

If you're looking for cheap std testing clinics in the state of Vermont to get a HIV, Herpes, Chlamydia, Gonorrhea, Syphilis or Hepatitis screening for yourself or your partner, you can get tested today by selecting an option below to find an affordable std test clinic near you. Same day std testing locations also available with results in 1-2 days. Learn more here.

What are the STI test options in Vermont?

Between fishing on Lake Champlain and skiing in the picturesque mountains, it’s important to make sure to get regular STD’s in Vermont, including tests for Chlamydia, Hepatitis B, C, Gonorrhea, Herpes, HIV, and Syphilis, even though the state ranks 49th out of all 50 states for total STD’s. There are a number of free testing facilities, but the wait is usually long, and confidentiality isn’t always guaranteed. It’s faster to make a simple phone call, schedule a private STD test, spend 15 to 20 minutes in a lab, and then be back on the slopes. With a state full of things to do and places to go, fast, confidential STD testing is a must to keep all residents in perfect health.

Clinic. Must be registered as a patient to receive services

Social Service Organization. If you don't have insurance, you may qualify for a state-funded program or a lower fee scale

Not Sure Which Option Is Best For You? Let us point you in the right direction for STD testing in , VT

STD Statistics for the State of Vermont

Statistics reported is based on publicly available data sources such as CDC for VT. Data is normalized to accurately report Vermont STD Breakdown. Demographic breakdowns are based on STD reporting available at the state level.

The state has incidences of other STD’s as well, though the numbers are far lower than Chlamydia statistics. The US Census Bureau reports a state population of 626,855 in 2013. HIV statistics among that population, for that year, was:

Historically, the state has stayed healthy, widely avoiding STD’s. There were zero instances of syphilis in 2009, and according to a CDC report in the year 2000, chlamydia infections in the state were the lowest in the nation. Since 2008, the Vermont Department of Health has celebrated April as National STD Awareness Month, and has enjoyed lower STD rates as a result.

As mentioned above, the state participates the STD Awareness Month in April, encouraging adults to get regular STD testing. The education doesn’t end here, however. Students in public schools benefit from a grant won by the state in 2013, the “Promoting Adolescent Health Through School-Based HIV/STD Prevention” grant. This competitive grant was only awarded to two states in the nation, and it is being used to fund the Vermont Sexual Health & Education Program, or V-SHEP.

The plan is to use the allocated funds over the next five years to support sexual health programs in public school systems. The three main components to helping this program work are:

The state is pulling in assistance from partners to implement the program, which includes the Outright Vermont in Burlington, The Center for Health and Learning in Brattleboro, and the national sexual educational organization, Answer.

Reaching beyond the public schools, the state education page provides a list of five main links to provide further information on STD testing and knowledge. What’s more, the state includes a link to the Human Rights Campaign, aiming to educate residents regarding the LGBT community, and equal rights in all sexualities.

The education and opportunities for learning come from a number of different sources, keeping the residents in the know and able to care for them. Through state-wide and nation-wide programs, education is at the forefront of the state’s amazingly low cases of STD’s. 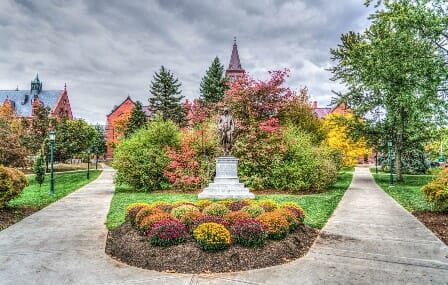 STD’s are at an all-time low, which is largely due to the high incidence of education available to the residents, who know where to get tested, how to get tested, and how to handle treatment of any positive results. However, Chittenden County, in the north end of the state near Lake Champlain, is noted for having the highest instances of chlamydia and gonorrhea in the state.

Overall, the county population was 159,515 in 2013, according to the Census Bureau. With a state population of 626,855 for the same year, this county holds 25% of the total population. The city of Burlington is the most populous city, at 42,284 residents in 2013. This high concentration of citizens leads to higher instances of positive STD tests.

Another factor in instance of positive STD tests or lack of testing among citizens, is the educational results. While the quality of education statewide is sufficient, it may be that students are failing to understand the material. According to state-reported demographic information, students tend to test low on standardized math tests.

The state has one of the lowest dropout rates in the country at 2.6%, but a high percentage come in below average when tested in math. Burlington High reported 42% of all students scoring below average on standardized math tests. These students, while receiving the necessary education, may not be able to fully understand the lessons. The combining result of lack of knowledge and the overpopulated city place Burlington, and Chittenden County, in the highest STD bracket.

No matter what else is happening, the residents of this state have it down when it comes to staying safe. Enjoying the winter snow and feeling the cool air of the many lakes in the area beats being sick any day of the week. Many residents stay safe and clean with a quick phone call, leading to a fast, confidential lab visit that keeps the population moving on a continuous basis. Whether visiting the impressive mountains, tasting the local maple syrup, or exploring one of the many animal havens here, it’s important to remember to make that phone call. Get tested regularly to stay safe, stay healthy, and stay on top of everything offered here. Make the call today.