There Are 6 Public Clinics & 8 Private STD Clinics Near You

If you're looking for cheap std testing clinics in the Cimarron Hills area to get a HIV, Herpes, Chlamydia, Gonorrhea, Syphilis or Hepatitis screening for yourself or your partner, you can get tested today by selecting an option below to find an affordable std test clinic near you.
Same day std testing locations also available with results in 1-2 days. Learn more here.

There Are 6 Public Clinics & 8 Private STD Clinics Near You

If you're looking for cheap std testing clinics in the Cimarron Hills area to get a HIV, Herpes, Chlamydia, Gonorrhea, Syphilis or Hepatitis screening for yourself or your partner, you can get tested today by selecting an option below to find an affordable std test clinic near you.

Questions about STD Testing?
Call at 1-800-666-1250 ( 8AM-5PM MON-FRI )
Call at 1-800-666-1250 ( 8AM-5PM MON-FRI )
COMPARE TESTS AND PRICING FIND A CLINIC IN Cimarron Hills
DISCLAIMER
Safer STD Testing is an informational referral website. It refers customers to nationally reputed private STD Testing service providers (“Preferred Service Providers” or “Advertisers”). Safer STD Testing is not a medical or healthcare professional facility or a provider of any medical or healthcare services. Safer STD Testing gets compensated on net purchase of products or services by our users referred to such Preferred Service Providers. Click here to read our full disclaimer.

What are the STI test options in Cimarron Hills,CO?

Cimarron Hills, CO, is a census-designated place and an unincorporated community in El Paso County. Public health records showed that the county had a fluctuating number of new HIV-positive patients between 2015 and 2017.

In 2017, the county’s surveillance team reported 29 HIV infections, which rose to 43 in the following year, and then reduced to 35 cases in the final year of reference.

Strategies being implemented by El Paso County’s public health department to help control the spread of HIV/STDs are funded by the Colorado Department of Public Health and Environment. These programs have allowed public health officials to enhance the availability of screening options, subsidize the cost of preventive medications such as PrEP and PEP, and improve partner service efficiency.

While some centers may offer free STD testing, you may need an appointment to receive services. At other clinics, your reason for visiting may be quite apparent to everyone else.

Please use the map to find a public clinic in Cimarron Hills, Colorado
GO TO CLINIC LISTINGS ABOVE
STD STATISTICS

S-Cap is operated by the Colorado Health Network, founded in 1983 to address the evolving needs of PLWHA in Colorado and those at risk of contracting HIV or other health conditions.

Its clinicians use third-generation rapid tests, which are quick and easy, and you will get your test results before leaving.

STI/HIV services are available to all patients. Through the Health Access Program, the clinic provides financial assistance for medical costs and health insurance premiums for PLWHA in Colorado and those using PrEP. During your first appointment, you will be required to bring a copy of your photo ID as well as proof of income and residency.

Testing and treatment services are available by appointment. To prevent STD/HIV infections, the trained staff encourages patients to use condoms and get routine testing. They also provide PrEP and PEP for HIV-negative persons. 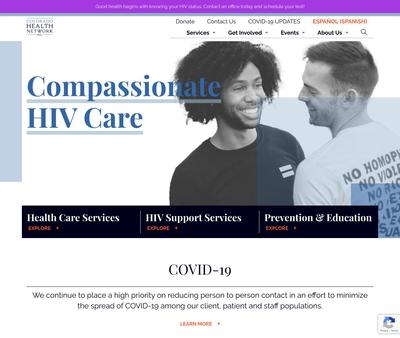 It tests for common STDs such as Chlamydia, Gonorrhea, Syphilis, and HIV, and results are delivered after one or two days. Individuals visiting this clinic are assured of convenient, confidential, and quick STI testing.

There are no requirements to access services at this clinic. Clients visiting the clinic are required to wear a face-covering or a mask. 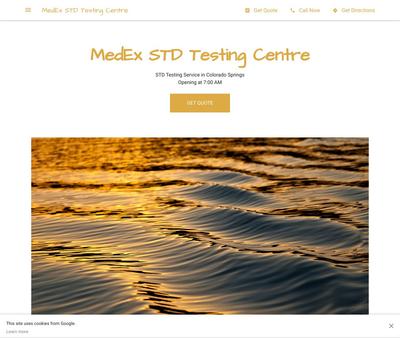 Its services include abortion recovery, pregnancy testing, ultrasound, and abortion pill reversal. The medical staff also offers free testing and treatment for STIs such as Chlamydia and Gonorrhea, as well as HIV screening.

All STD testing and treatment services at the Colorado Springs Pregnancy Center are free to all men and women regardless of their insurance status.

Individuals infected with STIs will receive referrals for treatment to have the infections treated early to prevent severe and long-term complications. The trained physicians also provide medical referrals for complicated infections.

Men visiting the Colorado Springs Pregnancy Center can receive education and support services to help them make sound life choices regarding pregnancy. They can also receive parenting classes and lessons as well as baby necessities such as baby clothing, free cribs, or car seats. The center also offers adoption information. 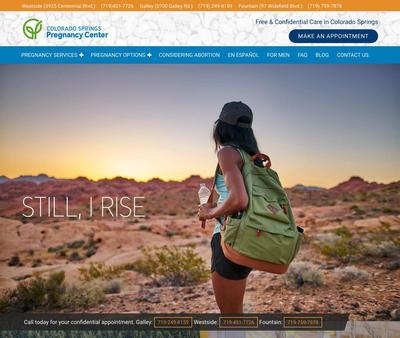 Through the family planning clinic, the hospital strives to eradicate HIV/STD infections by educating, testing, and treating STDs such as Syphilis, HIV, Gonorrhea, and Chlamydia.

Other services available in the family planning clinic include pregnancy testing and counseling as well as birth control.

The clinic offers same and next-day appointments for patients seeking STI treatment. Patients with Medicaid are welcome, and uninsured clients are charged on a sliding fee scale. Also, patients may be required to make a full payment for some lab fees. Additionally, for convenience purposes, you are required to print and fill in a registration form.

The medical staff also recommends a Gardasil HPV vaccine for some patients to prevent certain cancer and genital warts.

Men and women visiting the health center may receive exams such as prostate as well as a pap test, breast, and pelvic exams, respectively. The health department also has a teen clinic that provides preventive health to lower risk behaviors and prevent negative health outcomes. 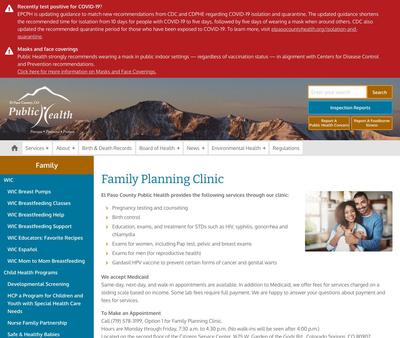