There Are 40 Public Clinics & 9 Private STD Clinics Near You

If you're looking for cheap std testing clinics in the Pinehurst area to get a HIV, Herpes, Chlamydia, Gonorrhea, Syphilis or Hepatitis screening for yourself or your partner, you can get tested today by selecting an option below to find an affordable std test clinic near you.
Same day std testing locations also available with results in 1-2 days. Learn more here.

There Are 40 Public Clinics & 9 Private STD Clinics Near You

If you're looking for cheap std testing clinics in the Pinehurst area to get a HIV, Herpes, Chlamydia, Gonorrhea, Syphilis or Hepatitis screening for yourself or your partner, you can get tested today by selecting an option below to find an affordable std test clinic near you.

Questions about STD Testing?
Call at 1-800-666-1250 ( 8AM-5PM MON-FRI )
Call at 1-800-666-1250 ( 8AM-5PM MON-FRI )
COMPARE TESTS AND PRICING FIND A CLINIC IN Pinehurst
DISCLAIMER
Safer STD Testing is an informational referral website. It refers customers to nationally reputed private STD Testing service providers (“Preferred Service Providers” or “Advertisers”). Safer STD Testing is not a medical or healthcare professional facility or a provider of any medical or healthcare services. Safer STD Testing gets compensated on net purchase of products or services by our users referred to such Preferred Service Providers. Click here to read our full disclaimer.

What are the STI test options in Pinehurst,NC?

The county’s HIV surveillance team observed an inconstancy in the number of new HIV infections reported in Pinehurst, NC, a village in Moore County between 2017 and 2019.

Besides that, a downward trend was evident regarding Gonorrhea surveillance data collected between 2016 and 2018. There were 94 persons positively diagnosed in 2016 at a rate of 98.5, but in the following year, that value reduced to 79 diagnoses happening at a rate of 80.0.

Similarly, there was an increase in the number of new Syphilis cases reported within the same time frame. While two cases were reported in 2018 at a rate of 2.0 per 100,000 residents, four were recorded in 2019 at a prevalence rate of 4.0.

Moore County's public health officials have been working with the state-managed HIV/STD prevention program to reduce the infections' spread. In doing so, they've been able to reduce the occurrence of new HIV/STD cases through impactful prevention education programs, monitor disease trends, and improve access to screening options in both medical and non-medical settings. They've also focused on improving the effectiveness of partner notification services and HIV/STD prevention training activities.

If you're within Pinehurst, NC, you can receive HIV/STD services at the Planned Parenthood - Fayetteville Health Center, FirstHealth Convenient Care-Pinehurst, Pinehurst Women's Clinic, and the Moore County Health Department.

You may access free STD testing in some centers, but they may only serve you if you have an appointment. Also, other clinics may have inconvenient operational hours.

Description: Public Health Department/Social Services Department. HPV vaccine only availble for those 19 and under through the Vaccines for Children (VFC) program. Free condoms available.

Description: Public Health Department/Social Services Department. Primary Care is for individuals that do not have access to primary care in the private sector. Other services available to the general public.

Description: No one will be denied access to services due to inability to pay. There is a discounted sliding fee schedule available.

You may need to schedule an appointment to access care at the clinic. The staff accepts most health insurance plans, and uninsured persons can use self-pay options to receive STD screening and treatment.

Individuals that test positive for an STD may receive personalized treatment plans to help manage or eradicate the infection. Preventative measures against HPV are also available. Additional medical solutions can be sought through an in-person consultation with the healthcare practitioners on staff.

The clinical personnel strives to protect the client’s confidentiality when conducting STD testing and treatment. You can secure your appointment conveniently over the phone. Additionally, you can contact the clinical staff if you need help understanding your billing options.

Pinehurst Family Care Center is a state-of-the-art health center staffed with experienced physicians who strive to provide comprehensive and individualized care to clients through the Sandhills area.

The clinic welcomes sexually active women of different ages for affordable STD testing on an appointment basis. You can use your health insurance coverage to pay for services received on location. You may need to provide your insurance card and valid photo identification during your first visit.

Referral services are available to individuals diagnosed with an STD. Clients can also communicate with medical professionals on-site in person, via email, or over the phone to receive alternative healthcare solutions based on their STD test results.

The clinical staff can help with the filing of out-of-network health insurance plans. You can use your phone to schedule your visit beforehand. Additionally, the clinic offers free aids and services, including qualified sign language interpreters, to ease communication for persons with disabilities.

The Moore County Health Department aims at protecting and promoting public health throughout Moore County by facilitating the prevention of diseases and injuries in a cost-effective manner.

Clients can visit the facility for low-cost HIV/STD screening. The healthcare practitioners on staff also coordinate the management of some STDs and provide HIV/STD counseling.

Some STD services available on location are free of charge to eligible clients. The clinicians on staff serve patients strictly on an appointment basis. Pregnant women can access HIV/STD solutions on a sliding fee scale if they meet the qualifications.

Persons diagnosed with an STD during their visit may receive medical remedies to help manage or clear away the symptoms of their infection. You can pursue additional treatment options via a one-on-one consultation with the healthcare professionals on staff.

The department has a policy that mandates the clinical staff to provide free language interpretation services to non-English speakers seeking medical solutions on-site.

You can also enjoy the convenience of booking your confidential HIV/STD screening appointment over the phone. 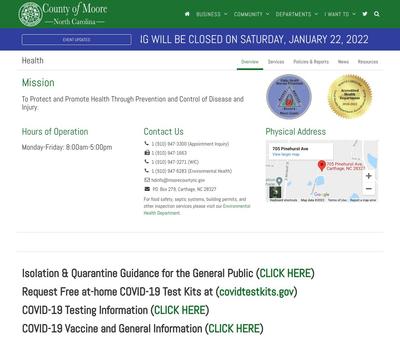 FirstHealth Convenient Care-Pinehurst is a reliable provider of immediate care for non-life-threatening medical conditions and injuries.

The clinic comprises board-certified physicians and qualified clinical staff who coordinate STD testing in the facility's on-site laboratory. Clients can also receive treatment for various STDs as well as vaginal and urinary tract infections on location.

The clinicians can accept insurance plans from most commercial carriers or Medicare replacement coverage providers. You can also use cash, checks, or any major credit card to access care at the clinic. An in-house financial assistance program may be available if you satisfy the eligibility criteria.

Your healthcare provider may prescribe medications to help treat some STD infections. However, you can communicate with the clinicians on staff digitally or personally for further medical guidance.

The clinic offers an online patient portal that you can use to send secure messages to your physician, view your test results, request a prescription refill, manage your visit, and apply for financial assistance. You can also use the platform to pay your medical bill conveniently online. 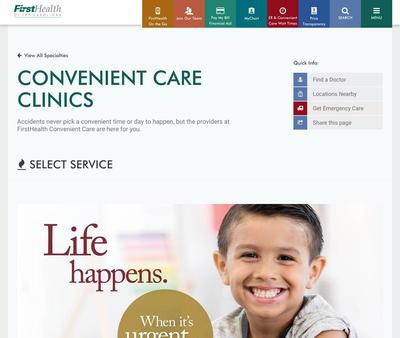