There Are 54 Public Clinics & 8 Private STD Clinics Near You

If you're looking for cheap std testing clinics in the Chillicothe area to get a HIV, Herpes, Chlamydia, Gonorrhea, Syphilis or Hepatitis screening for yourself or your partner, you can get tested today by selecting an option below to find an affordable std test clinic near you.
Same day std testing locations also available with results in 1-2 days. Learn more here.

There Are 54 Public Clinics & 8 Private STD Clinics Near You

If you're looking for cheap std testing clinics in the Chillicothe area to get a HIV, Herpes, Chlamydia, Gonorrhea, Syphilis or Hepatitis screening for yourself or your partner, you can get tested today by selecting an option below to find an affordable std test clinic near you.

Questions about STD Testing?
Call at 1-800-666-1250 ( 8AM-5PM MON-FRI )
Call at 1-800-666-1250 ( 8AM-5PM MON-FRI )
COMPARE TESTS AND PRICING FIND A CLINIC IN Chillicothe
DISCLAIMER
Safer STD Testing is an informational referral website. It refers customers to nationally reputed private STD Testing service providers (“Preferred Service Providers” or “Advertisers”). Safer STD Testing is not a medical or healthcare professional facility or a provider of any medical or healthcare services. Safer STD Testing gets compensated on net purchase of products or services by our users referred to such Preferred Service Providers. Click here to read our full disclaimer.

What are the STI test options in Chillicothe,OH?

Many communities around the country are dealing with a significant increase in the number of newly reported STD cases, and the city of Chillicothe, Ohio, located in Ross County, is no exception.

Ohio state records show that both chlamydia and gonorrhea rates rose steadily from 2014 to 2017. In fact, chlamydia rates rose by more than 40 percent over this timeframe, as the number of newly reported chlamydia cases jumped from 183 cases in 2014 to 259 cases in 2018.

Gonorrhea rates, on the other hand, nearly doubled over this same timeframe, as the number of newly reported cases spiked from 50 cases in 2014 to 98 cases in 2018. County records also show that the majority of newly reported STD cases involved residents between the ages of 15 and 29 years old.

The Ross County Surveillance Report for 2017 shows that the rate of residents in the county living with HIV at the end of 2017 was 84.1 cases out of every 100,000 residents.

There are several possible STD testing locations in Chillicothe, Ohio, including the Adena Urgent Care – Western Avenue, Hope Clinic, and Ross County Health Department. In addition, local physicians and private healthcare centers may also offer STD or HIV testing. Many private practices in the Chillicothe area are located along Western Avenue or near Route 35.

Some testing locations may even promote low-cost or free STD testing solutions, but residents may need to meet specific income eligibility guidelines. Also, the center may only accept walk-in appointments, which means you may experience longer wait times.

Description: Public Health Department/Social Services Department. Anyone. HIV testing once a month. Call for schedule. Only HIV testing and counseling free. Hep A and HPV vaccines for up to age 18. HIV Testing in conjunction with Portsmouth City Health Department. Now have Hepatitis A for adults. Closed daily from 12noon-12:30pm

Test results for hepatitis C, chlamydia, gonorrhea, and syphilis are available within 24 to 36 hours after the test is administered. Patients are notified whether the results are positive or negative.

Individuals with an increased risk of contracting STDs can receive low-cost testing. An appointment must be scheduled on Monday or Friday from 10:00 am to 4:00 pm.

Symptoms and risk factors are evaluated by dedicated and trusted medical professionals. Patients that have an increased risk of infection for chlamydia, gonorrhea, and syphilis can receive free treatment right away. Regular check-ups are recommended and follow-up visits may be required in order to determine the progress of the treatment.

Short North Medical Center provides a safe environment for all patients. All tests and results are private and kept strictly confidential. Interpreting services are available at this location for more than 200 different languages and dialects when needed. In case of an emergency, patients can speak to a nurse or doctor after hours. 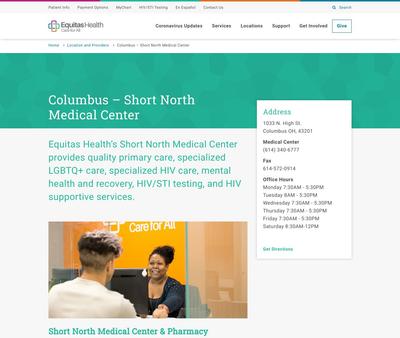 Over 1 million patients worldwide receive cutting-edge medication and support from the AIDS Healthcare Foundation. AHF not only provides testing and treatment for STDs, but also offers information about sexually transmitted diseases, safer sexual practices, and cryotherapy treatments. Referrals to HIV/AIDS specialists are also available. AHF is now affiliated with the Columbus Out of the Closet Thrift Store.

STD tests and HIV screenings are available to all visitors who come to the Columbus Out of the Closet Thrift Store. All testing is free for sexually active people regardless of their age or income.

For every dollar earned, Out of the Closet Thrift Stores donates 96 cents to support AHF clinics all over the world defeat the HIV/AIDS epidemic. Donations are also accepted and forwarded to the AIDS Healthcare Foundation. 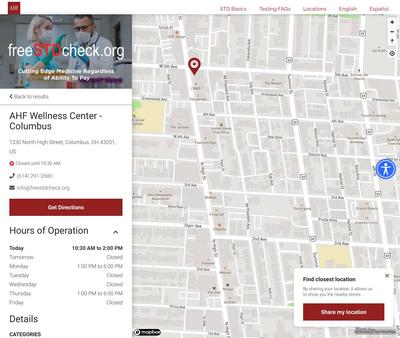 Equitas Health, a nonprofit organization founded in 1984, is a regional healthcare provider. Federally recognized as a community health center, the organization is among the largest serving the LGBTQ+ and HIV/AIDS communities in the country.

Free testing is provided to people who are sexually active with one or more partners. People with an increased risk of contracting HIV are also able to get free testing. Testing at this clinic is by appointment only.

A health navigator will discuss the pros and cons of a variety of medication options. Your doctor will have an informative conversation with you in person to determine the best course of action.

Equitas Health Portsmouth provides a healthcare environment that is accepting and safe for all. Providers are able to devote more time to patients and will provide HIV prevention materials and information to all sexually active visitors so they can understand the risks associated with HIV. 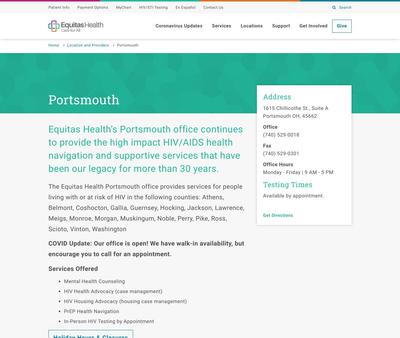 A walk-in clinic located within the Columbus Public Health Department, The Take Care Down There Clinic offers STD testing. It takes 5 to 7 business days for all test results to be processed. An HIV risk screening may also be provided. Individuals who are at a higher risk for HIV may receive a finger-stick test that usually provides same-day results in approximately 30 minutes.

Visitors who are sexually active or at risk of contracting HIV are eligible to receive an STD test. All STD testing is free.

Only STD testing is offered at this facility. No STD treatments or exams are provided. Patients experiencing STD symptoms should visit the health department's Sexual Health Clinic or contact their primary care provider regarding treatment options.

No appointments are necessary at the walk-in clinic. All STD testing is free of charge regardless of age or income, and all testing and results are strictly confidential. 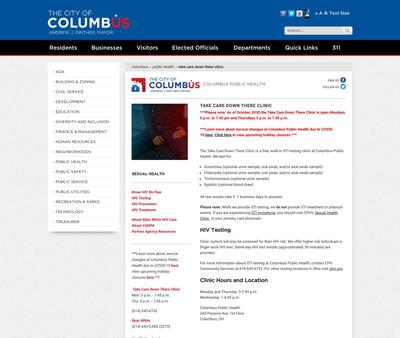