There Are 26 Public Clinics & 3 Private STD Clinics Near You

If you're looking for cheap std testing clinics in the East Ridge area to get a HIV, Herpes, Chlamydia, Gonorrhea, Syphilis or Hepatitis screening for yourself or your partner, you can get tested today by selecting an option below to find an affordable std test clinic near you.
Same day std testing locations also available with results in 1-2 days. Learn more here.

There Are 26 Public Clinics & 3 Private STD Clinics Near You

If you're looking for cheap std testing clinics in the East Ridge area to get a HIV, Herpes, Chlamydia, Gonorrhea, Syphilis or Hepatitis screening for yourself or your partner, you can get tested today by selecting an option below to find an affordable std test clinic near you.

Questions about STD Testing?
Call at 1-800-666-1250 ( 8AM-5PM MON-FRI )
Call at 1-800-666-1250 ( 8AM-5PM MON-FRI )
COMPARE TESTS AND PRICING FIND A CLINIC IN East Ridge
DISCLAIMER
Safer STD Testing is an informational referral website. It refers customers to nationally reputed private STD Testing service providers (“Preferred Service Providers” or “Advertisers”). Safer STD Testing is not a medical or healthcare professional facility or a provider of any medical or healthcare services. Safer STD Testing gets compensated on net purchase of products or services by our users referred to such Preferred Service Providers. Click here to read our full disclaimer.

What are the STI test options in East Ridge,TN?

The rise in STD rates is becoming a growing concern in communities throughout the United States, including in the city of East Ridge, Tennessee, in Hamilton County. While both gonorrhea rates and syphilis rates increased from 2016 to 2017, the county saw a decrease in the number of chlamydia rates.

According to Hamilton County surveillance reports, there were 37 newly reported HIV cases in the county in 2017 and a total of 1,127 county residents were living with HIV as of December 31, 2017.

There are limited resources in East Ridge, Tennessee, such as Physicians Care – East Ridge, that might offer STD testing. However, residents can travel into Chattanooga to find other potential STD or HIV testing locations, including Chattanooga-Hamilton County Public Health Department, Channels of Love, Cempa Community Care, and AFC Urgent Care – Chattanooga.

In addition, local private physician offices and healthcare centers may offer STD testing. Many of these doctor’s offices are located along Ringgold Road or Spring Creek Road.

Some testing clinics may promote low-cost or free STD testing. Free testing could be the right option for some, but in many cases, you must meet specific income requirements to qualify for free services. In addition, not all clinics offer comprehensive STD testing, and some don’t provide immediate test results.

Description: Public Health Department/Social Services Department. Appointments encouraged, but walk-ins are welcome on a first-come first-served basis. Walk-ins are encouraged to arrive at least one hour before closing times. Patients with or without insurance are welcome. Services are provided on a sliding scale and payment plans are available for those in need.

Description: Take those with and without insurance. After hour appointments are available for DPC members

Choices offers unplanned pregnancy-related medical services and support to men and women in Chattanooga and the surrounding areas. Its clinicians provide limited STD screening services, which involve testing urine samples collected during pregnancy testing. You may receive treatment options if you test positive.

The staff encourages clients to schedule appointments to receive free STD testing and treatment. You should have a photo ID during your first visit. STD services are exclusively available to clients who visit the clinic for pregnancy testing.

Persons that test positive for an STD may receive medications to help eradicate their infection. The clinical staff may request clients to undergo testing three weeks after completing their medication to ensure that they've been treated successfully.

The staff’s available on-call or via text to clients that may need STD or pregnancy-related information. Appointments can be reserved online. The medical personnel also allow same-day consultations and can conduct STD testing and treatment on a walk-in basis. 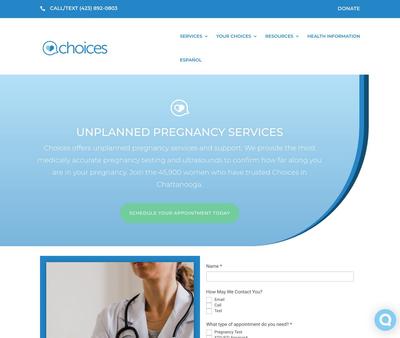 Formerly known as Chattanooga CARES, Cempa Community Care has led the way in providing care, social service advocacy, and assistance to PLWHA since 1986. The clinic provides access to HIV-specific diagnostic services, which entail rapid HIV tests that can produce results within 20 minutes.

Its medical practitioners also screen individuals for STDs and offer treatment options for some infections. Additionally, they can coordinate primary or preventative HIV care.

HIV testing at the clinic is free and confidential. The care center welcomes low-income, underinsured, and uninsured individuals for affordable HIV/STD services accessible on a sliding fee scale basis. Supportive HIV services are available through the benefit of a state-funded program.

The medical practitioners on staff coordinate annual HIV testing as part of HIV treatment to help with the early detection of co-occurring health risks. They also provide medication adherence counseling to ensure viral suppression in HIV-positive patients. HIV-negative individuals may receive PrEP medications to keep them from contracting the virus.

The Ryan White Program makes it possible for PLWHA to access transportation assistance to and from appointments if they need it. A pharmacy is available on-site to enhance the convenience of accessing HIV medications. Medication deliveries are also possible.

Choice Health Network was founded in 2018 to provide access to peer and social support as well as primary and preventative care for HIV and Hepatitis C to the local communities throughout East Tennessee.

Medications are available to individuals positively diagnosed with HIV. The clinical personnel can offer primary care for Hepatitis C. They may prescribe PrEP and PEP medications to HIV-negative individuals at high risk of infection.

The medical professionals on staff provide telehealth services. There’s an on-site pharmacy that clients can use to access or refill their medications conveniently. Transportation assistance may be available upon request. 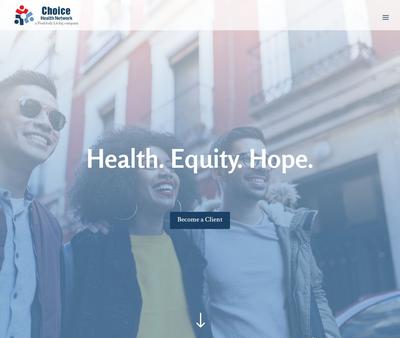 The Hamilton County Health Department offers wide-ranging clinical services to improve and protect the health and wellness of the individuals and families in Hamilton County. It has a sexual health clinic that liaises with regional laboratories to coordinate confidential HIV/STD screenings. Other healthcare solutions available on-site include HIV case management services and family planning options for women.

Clients may receive HIV testing at the clinic at no charge. If you have TennCare coverage, you may qualify for free STD testing and treatment. Standard charges may apply to clients without TennCare upon showing their proof of residency. Individuals may receive STD care on a sliding fee scale and HIV case management solutions through the benefit of a federally funded program.

Treatment options are available to individuals positively diagnosed with STDs and their partners. The clinic’s case managers may help HIV-positive individuals in obtaining referrals to infectious disease specialists and primary care providers. HPV, Hepatitis A, and Hepatitis B vaccines are also available on location.

The clinic has in-house interpreters for persons that speak Spanish along with a telephone line that features interpretation services for over 170 languages. Its staff dispenses medications on-site. Community education programs are available on location. 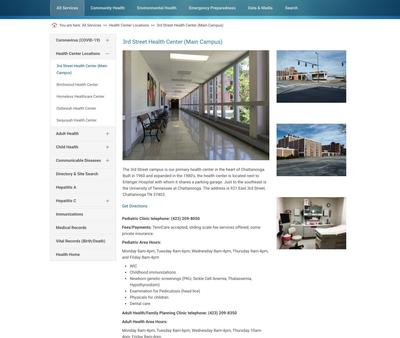