There Are 25 Public Clinics & 43 Private STD Clinics Near You

If you're looking for cheap std testing clinics in the Kailua area to get a HIV, Herpes, Chlamydia, Gonorrhea, Syphilis or Hepatitis screening for yourself or your partner, you can get tested today by selecting an option below to find an affordable std test clinic near you.
Same day std testing locations also available with results in 1-2 days. Learn more here.

There Are 25 Public Clinics & 43 Private STD Clinics Near You

If you're looking for cheap std testing clinics in the Kailua area to get a HIV, Herpes, Chlamydia, Gonorrhea, Syphilis or Hepatitis screening for yourself or your partner, you can get tested today by selecting an option below to find an affordable std test clinic near you.

Questions about STD Testing?
Call at 1-800-666-1250 ( 8AM-5PM MON-FRI )
Call at 1-800-666-1250 ( 8AM-5PM MON-FRI )
COMPARE TESTS AND PRICING FIND A CLINIC IN Kailua
DISCLAIMER
Safer STD Testing is an informational referral website. It refers customers to nationally reputed private STD Testing service providers (“Preferred Service Providers” or “Advertisers”). Safer STD Testing is not a medical or healthcare professional facility or a provider of any medical or healthcare services. Safer STD Testing gets compensated on net purchase of products or services by our users referred to such Preferred Service Providers. Click here to read our full disclaimer.

What are the STI test options in Kailua,HI?

Chlamydia infections in Honolulu County have fluctuated over recent years, where initial cases among the population in 2012 were 5,096, followed by a slight decline in 2014, with reported 4,994 cases; however, by the end of 2018, they had spiked to 5,211.

Cases of Gonorrhea in the county also fluctuated over the same period where there were 728 infections in 2012, followed by a sharp increase in 2016, where 1,262 cases were recorded, and a notable decline to 912 was noted in 2018.

Honolulu County also experienced a surge in Syphilis cases since 2012, with 37 reported infections, which rose 173 cases in 2016.

Honolulu County Public Health Department, in affiliation with Hawaii Department of Health, has adopted several strategies to curb the spread of HIV/STDs in the community, including providing free STD/HIV testing on a walk-in basis to all people aged 14 and older.

Residents of Kailua, HI, may access free STD testing services at some health centers, but walk-in options might not exist, and they could also experience long wait times.

You may be liable for a fine if you miss your appointment or cancel it 24 hours beforehand. Current patients should check in at least 15 minutes before their consultation, while new patients should arrive 30 minutes earlier. New clients should also have their ID and insurance card during the visit.

Clients can call or book an appointment online to consult with the doctors on staff regarding their STD worries. The personnel can write prescriptions to help treat or manage some infections.

The clinical team will send you an email to remind you about your upcoming medical appointments. Also, you can conveniently book or reschedule your appointment via the secure scheduling tool on the website. You can also get STD prevention resources on the website 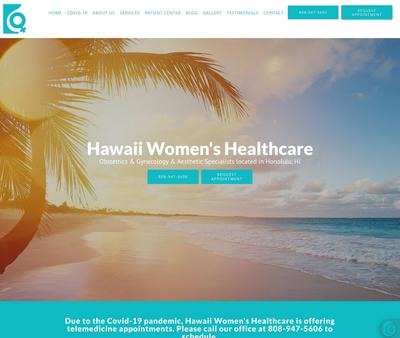 You’re welcome to receive HIV, STD, and Hepatitis C care at the facility irrespective of your insurance status or ability to pay. You may use private health coverage, Medicaid, or Medicare to clear your medical expenses. Alternatively, you may qualify for a sliding fee scale if you have proof of income during the visit.

Medications may be available to treat or manage some infections. The medical team can also coordinate Native Hawaiian Healing therapies, HIV medication, and nutritional counseling sessions. They may also offer HIV education and prevention solutions.

Clients can get their medications conveniently at the on-site pharmacy. The clinic’s IMUA program offers an online interactive space where young MSM can discuss sex and relationships. Persons enrolled in the program may also access free HIV/STI testing at Waikiki Health Center. The clinic offers emergency contraception. 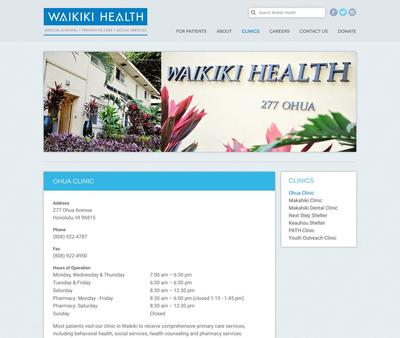 If you’re HIV-positive, you should provide medical health verification and proof of residency to receive HIV medical case management services. Clients may receive HIV testing at the facility free of charge. The staff screens for Hepatitis C based on individuals’ risks. 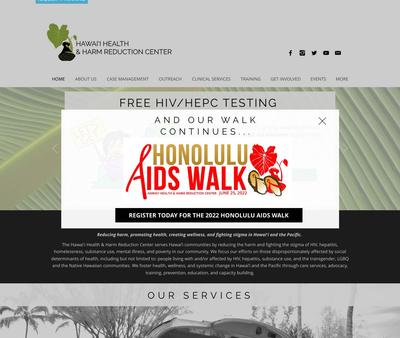 HIV and Syphilis screening services are accessible based on individuals’ risk factors. Clients and their partners can access STI testing and treatment at no cost. They can call to schedule their medical appointments beforehand.

If the staff requests confirmatory HIV testing, it’ll schedule a follow-up consultation to deliver the results. HIV-negative persons may get PREP referrals. Those living with HIV may receive assistance accessing care.

Clients can use Chexout to access their HIV/STD test results. The clinic offers free condoms and lube, and parking may be available inside the building. Its staff may help HIV-positive individuals access HIV Drug Assistance Program and Hawai‘i Insurance Continuation Program benefits. 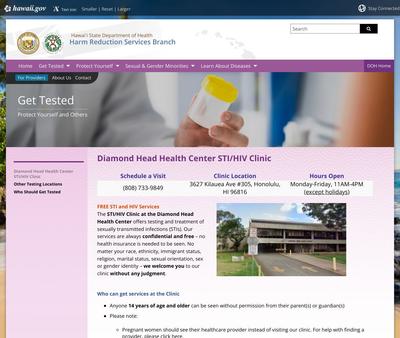