Free STD Testing in the State of Hawaii

There Are 19 Public Clinics & 22 Private STD Clinics Near You

If you're looking for cheap std testing clinics in the state of Hawaii to get a HIV, Herpes, Chlamydia, Gonorrhea, Syphilis or Hepatitis screening for yourself or your partner, you can get tested today by selecting an option below to find an affordable std test clinic near you. Same day std testing locations also available with results in 1-2 days. Learn more here.

What are the STI test options in Hawaii?

Sunshine, surf, and sandy beaches are how tourists think of the Hawaiian islands but for residents of all Niihau, Kauai, Oahu, Maui, Molokai, Lanai, Kahoolawe and the Big Island of Hawaii the appeal goes deeper. The laid-back lifestyle and the low emphasis on money that define why many Hawaiians choose to live here are in direct conflict to the reason many tourists visit. The islands have diverse landscape, a plethora of unique career opportunities and a strong sense of culture and history that help Hawaii to maintain its unique feel in comparison to the other states. This resistance to mainland ideals can negatively impact locals when it comes to taking full advantage of health-care including STD clinics that offer  STD testing in Hawaii as well as upscale private STD testing.

Need to enroll as patient

Need to register as a patient. Services for women

Not Sure Which Option Is Best For You? Let us point you in the right direction for STD testing in , HI

STD Statistics for the State of Hawaii

Statistics reported is based on publicly available data sources such as CDC for HI. Data is normalized to accurately report Hawaii STD Breakdown. Demographic breakdowns are based on STD reporting available at the state level.

Hawaii State health profiles STD statistics across the islands. Syphilis remains a health problem primarily with men who have sex with men as well as congenital transmission from mothers to unborn children. In Hawaii the rate of syphilis was 3 per 100,000 in sexually-transmitted cases with only 1 case of congenital syphilis in the last eight years.

Chlamydia has an infection rate of 477 per 100,000 and is ranked 39th among 50 states. Gonorrhea  infections were reported at 52 per 100,000 reported cases of chlamydia among women were 2 1/2 times greater than those among men. Ciprofloxacin-resistant gonorrhea is endemic in Hawaii therefore those diagnosed with gonorrhea in any part of Hawaii should not be treated with fluoroquinolones.

Hepatitis A and B are at the lowest rates ever recorded due to the effective use of vaccines. There is still no effect of vaccine for Hep C widely available. The number of people living with diagnosed HIV in Hawaii is 2430. This makes the rate of 206 per 100,000. Of this number:

The Center for disease control has spent more than $2 million to fight HIV in the islands and just under $400,000 in preventing STDs. State progress toward CDC’s division of HIV/AIDS prevention goals show marked improvement in early diagnosis and educating the Hawaiian public. 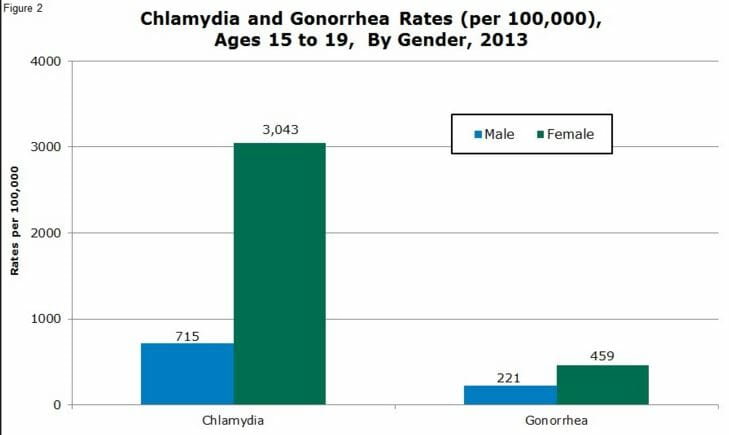 In June 2015 the Hawaii Board of Education  passed a revision to the Sex Education Policy resulting in a new approach. Prior to this change the education methods were entirely abstinence-based. The new goals are to open an ongoing conversation using age-appropriate curriculum that promotes dialogue, both at home and in class,  on healthy sexual practices as they change through the maturation process.

Evidence-based teen pregnancy prevention programs have been shown to change teens’ sexual behavior by increasing youths’ knowledge and understanding of risk around pregnancy and STDs. By educating youth about contraception, sexual values, and confidence to avoid unprotected sex the Board of Education hopes to reduce incidences.

Sexual health education in Hawaii still has challenges, including financing, curriculum , and encouraging balanced parent involvement as well as educator training and instruction time. Cultural differences between local natives and the many non-Americans living on the islands is also an issue.

We know that the demographics in Hawaii can play a key role in health disparities across age, ethnic background, and income level. The combined population for the Hawaiian Islands is almost 1.5 million people with the split being equal male and female. The racial makeup includes 38% Asian, 24% white, 10% native Hawaiian, and 23% being composed of two or more races combined.

Those in rural communities face health access consequences associated with living in remote regions and may have limited access to health-care and public clinics. Additionally, transportation and fear of confidentiality in such small communities may be part of the challenge. Those identified at highest risk include:

Other demographic contributors include:

The good news for the people of Hawaii is the islands are home to many clinics and testing facilities who share a goal of making personalized sexual health care easy to access and affordable for everyone. There are local options that include:

With all these options, it has never been so easy to take charge of your own sexual health and regain the peace of mind that comes with a clean bill-of-health! Remember, visitors to our island come for adventure and romance- don’t get swept away and forget to keep yourself safe!