There Are 6 Public Clinics & 3 Private STD Clinics Near You

From the Stones River National Battlefield to the Cannonsburgh Village, there’s history packed into the city of Murfreesboro; but there’s also a rising STD threat that emphasizes the importance of STD testing.


If you're looking for cheap std testing clinics in the Murfreesboro area to get a HIV, Herpes, Chlamydia, Gonorrhea, Syphilis or Hepatitis screening for yourself or your partner, you can get tested today by selecting an option below to find an affordable std test clinic near you. Same day std testing locations also available with results in 1-2 days. Learn more here.

COMPARE TESTS AND PRICING
FIND A CLINIC IN Murfreesboro

What are the STI test options in Murfreesboro,TN?

From 2014 to 2015 rates of syphilis increased by 19% – an alarming rise for the least prevalent STD reported across the country. And cases of the other STDs are on the rise, as well and this affects Murfreesboro.

Reported cases of STDs in 2017 showed an alarming upward trend.

Middle Tennessee State University celebrates Sexual Responsibility Week every year during February, during Valentine’s Day week. Programs covering all topics related to safe sex practices and public awareness are hosted over the course of the event, sponsored by Health Promotion.

Murfreesboro has public and private locations throughout the city for STD testing, as you can discover by searching through the clinics that the city offers.

The Tennessee Department of Health has many locations throughout the area, including one on West Burton Street.  Other locations do offer free STD testing, though you may have to wait for your results or speak with a doctor.

Public Health Department/Social Services Department. Hepatitis A and B vaccines available to those 18 and under through the Vaccines for Children (VFC) program. Free condoms available

AIDS Service Organization,Community Based Organization. My House is a 15-1502 CDC funded agency

Not Sure Which Option Is Best For You? Let us point you in the right direction for STD testing in Murfreesboro, TN

While the city is generally known for its Civil War battlefields, this is changing due to recently released statistics. This small southern city has been seeing a steady increase in the number of sexually transmitted diseases, and health officials warn that this trend is likely to continue.

Statistics from the CDC indicate the all STDs are increasing in frequency, and this includes HIV and Syphilis. In 2003 there were 3 confirmed cases of Syphilis, and the number of residents who test positive continues to rise each year.

STDs are not only affecting younger generations, but older residents as well. In some cases it’s not uncommon for some people to test positive for more than one sexually transmitted disease at a time. This has lead to an increased fear in health officials that the STD rate for the city and surrounding Rutherford County is only going to get worse.

Women continue to be at a higher risk for Chlamydia than men, but the opposite is true regarding Gonorrhea and Syphilis. Herpes is rising at an alarming rate in the public schools, and even HIV/AIDS rates are slowly climbing each year. 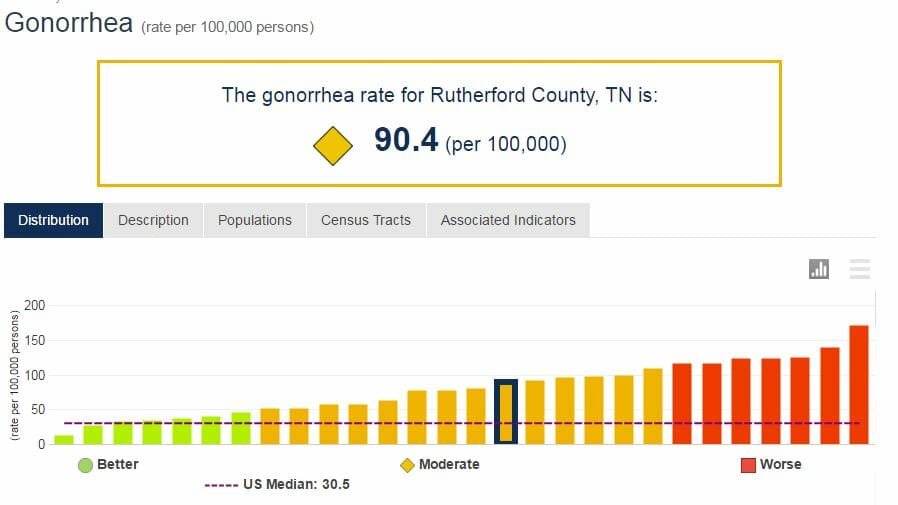 Even though studies have conclusively shown that the best way to stop the spread of STDs is through comprehensive sexual education classes, city and state officials still refuse to offer these programs to area students.

Relying on the outdated information included in certain approved abstinence based programs, officials are hopeful that these classes will discourage teens and young adults from engaging in sexual activities. Even though abstinence is one of the best ways to prevent unwanted pregnancies, it does little to stop the spread of STDs.

Without the information offered in comprehensive sexual education classes teens and young adults will not know how to protect themselves. Not all STDs are spread through the penetration that occurs during intercourse, some can be passed simply by casual contact. Relying on outdated information can also give students a false sense of security and many feel that as long as they are careful they will never contract a sexually transmitted disease.

Several demographical factors that are contributing to the high STD rates in the city that include a lack of available information and too few testing facilities. Since local officials are adamantly opposed to introducing current information about the spread of STDs in the classrooms students and residents often do not know that they are at risk, let alone how to adequately protect themselves.

Recent budget cuts to community clinics has made it difficult to find a place to be tested, and when they do the long lines often has them turning away in frustration. The budget cuts are also affecting lower income families who simply cannot afford regular STD testing. Many of these families also live on the outskirts of the city limits where there are not any testing facilities located nearby.

The area also has staunch conservative beliefs that frown on any sexual activity before marriage. Teens and young adults often feel like they have no one to talk to about any problems they may be facing with their sexual health, and older residents often feel too embarrassed to be seen standing in line at a community health center.

While these may be valid fears and concerns, it does little to improve the STD rates in the city.

Before heading off to explore a nearby Civil War battlefield or you make plans to catch a football game, take time out of your busy schedule to be tested for all of the sexually transmitted diseases. If you want to avoid the long lines at the neighborhood clinic, call for an appointment. Private and confidential, you can rest easy and still make it to the football game.

Other Cities Near Murfreesboro, Tennessee

Select and order your STD tests using the secure, online checkout, or by phone. If you're not sure what tests you need, dedicated certified care advisors can help. Call 1-888-331-0485 , 8AM-7PM MON-FRISee tests & pricing