There Are 4 Public Clinics & 3 Private STD Clinics Near You

If you're looking for cheap std testing clinics in the North Cleveland area to get a HIV, Herpes, Chlamydia, Gonorrhea, Syphilis or Hepatitis screening for yourself or your partner, you can get tested today by selecting an option below to find an affordable std test clinic near you. Same day std testing locations also available with results in 1-2 days. Learn more here.

COMPARE TESTS AND PRICING
FIND A CLINIC IN North Cleveland

What are the STI test options in North Cleveland,OK?

North Cleveland, OK has the quiet pace of a small, rural community. It is located just a few miles from Moore, OK and a few minutes from the excitement and amenities of Oklahoma City. Rates of chlamydia have risen by 15% in Cleveland County since 2013. In addition, syphilis is up 38%. The number of cases of gonorrhea rose by 22%.

These alarming increases pose a significant risk to population of North Cleveland and Cleveland county. According to the Oklahoma State Department of Health, the number one reason for this rise is that people fail to get tested and take appropriate precautions to prevent the spread of these diseases.

Among all sexually transmitted diseases that are tracked by the CDC, those between the ages of 20-24 had the highest increase among all disease categories across all of Oklahoma.

Getting tested is the most important thing that you can do to help stop the spread of STDs in North Cleveland. The Cleveland County Health Department operates an STD clinic that at the Moore and Norman offices. However, the hours are limited, and the testing is offered on a first-come, first-served basis. Many times, you may have to wait without being seen and my have to come back and try again.

There are no clinics that offer free STD testing in North Cleveland, but there are some free clinics in nearby Moore, Norman, and Oklahoma City. However, you must have transportation and the services that they offer are limited. Some do not have a physician on staff who can see you.

Community Based Organization. A certificate of degree of Indian blood (CDIB) card is required

Social Service Organization. If you are uninsured, you may qualify for a state-funded program or a lower fee scale. Please bring the following documents: birth certificate, pay stub, photo ID. Social Security Card. Fees for services are based on your household income. Please bring proof of income when you arrive for your visit. You will not be turned away because of your inability to pay

Community Based Organization. Please call for locations. Must be eligible for direct patient care services provided by tribally operated clinics and/or IHS facilities. An individual is eligible if they are of Indian descent and a member of a federally recognized tribe

Community Based Organization. Must be over the age of 13 and not appear to be under the influences of alcohol or drugs. There is a fee for the rapid HIV testing. HIV-antibody blood test is free. Also provide free/low cost Hepatitis C testing to those at-risk. Due to funding requirement syphilis testing only available to men. Free Chlamydia and Gonorrhea testing if supplies are available

Public Health Department/Social Services Department. HIV testing as part of a general screening for STDs only

Not Sure Which Option Is Best For You? Let us point you in the right direction for STD testing in North Cleveland, OK

Please use the map to find a public clinic in North Cleveland, Oklahoma
GO TO CLINIC LISTINGS ABOVE
0
People, On Average, Visit This Site From Oklahoma Every Month
0
People from Oklahoma, On Average, Take Action For Their Sexual Health

Statistics reported is based on publicly available data sources such as CDC for Cleveland County, OK. Data is normalized to accurately report Cleveland County STD Breakdown.

This tiny neighborhood located in the small city of Cleveland might think that it is safe from STDs, but recent statistics released by the CDC and Oklahoma Department of Health indicate that this is not the case.

Since 1999 the number of cases of Chlamydia and Gonorrhea has been on the rise, and this is a problem in a city with a population well under 4,000. Not only are the percentages for these two viruses climbing, but HIV and Syphilis rates are rising also.

Due to the city’s unique demographics, Caucasians and Native Americans are among those most affected by STDs. Young women and men ages 18 to 24 are more likely to test positive than older residents, though in the last ten years statistics show that this is starting to change. Over the past several years health officials have noticed that the number of Syphilis cases seems to be increasing, especially in older men. The same is also true for HIV/AIDS rates, with 8 cases reported in 2014.

Some community leaders have noted that the city’s STD rate is well below state averages, by as much as 91 percent for its percentage of residents infected with Gonorrhea. On the surface this might look promising, but once again it should be noted that with a population of less than 4,000 the rate still equals an estimated 200 residents with this sexually transmitted disease. Some of the other statistics that should encourage residents to be tested for all of the STDs include,

The public school district in this small city is already dealing with a few challenges, excluding its lack of a comprehensive sex education program. Even though there are only a few public schools, it is also important to remember that the small population equals limited tax revenue going to fund education. In order to keep the schools operating much of the funding is coming from the state and federal government.

While the additional revenue is vital for educators’ salaries and necessary maintenance on the aging buildings, it also comes with stipulations regarding the information taught in health classes.

Abstinence is encouraged, and students are taught that it can protect them from sexually transmitted diseases. While it is true that abstaining from sexual activity will lower your risk of contracting a venereal disease, it is not 100 percent effective. The high rate of teen pregnancies in the area also shows that many students are becoming sexually active, and that promoting abstinence until marriage is no longer effective.

This neighborhood might have a small population, but it is diverse. The majority of residents are Caucasian, followed by Native Americans. This is the main reason that the STD percentages differ from national averages, but it also does not mean that other ethnicities are not equally at risk.

The lack of comprehensive sex education programs remains the biggest reason for the increasing STD rates, especially among teens. As social media continues to promote sexual activity, even teens in this rural community are no longer willing to abstain from intercourse until marriage.

A limited number of health care facilities is making it difficult for many residents to be tested, and most do not want to run into a friend or family member at the few places that are open. The community centers are also only open for brief periods of time, and this is contributing to the problem.

Over the past twenty years older residents are testing positive for Syphilis, Chlamydia and Gonorrhea, and much of this is due to increased illegal drug use. As more adults are treated for opioid addictions, health officials are also noticing that the number of STIs reported are increasing.

North Cleveland also has a high rate of unemployment, which is making it impossible for these residents to afford regular health care that includes STD testing. As long as these and the city’s other problems remain, residents can expect to also see an increase in STD percentages. 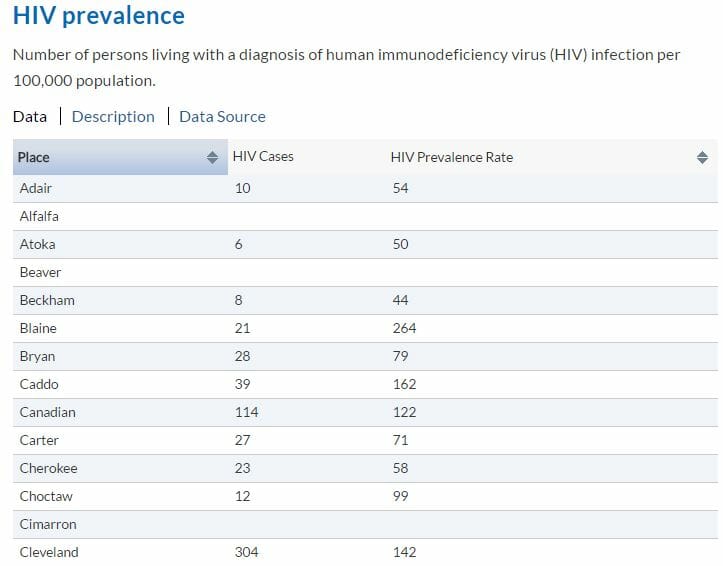 Residents who want to take care of their sexual health are finding that it can be difficult in this rural community. Not only are the very few places to go, most do not look forward to standing in line with people that they know. Now you can avoid your family and neighbors and still take care of your health, simply by making one quick and easy phone call. You can schedule confidential STD testing at your convenience, and only spend a few minutes at a local lab. Not only will the procedure take a short time, you also don’t have to worry about anyone finding out.

Other Cities Near North Cleveland, Oklahoma