There Are 14 Public Clinics & 25 Private STD Clinics Near You

If you're looking for cheap std testing clinics in the Boerne area to get a HIV, Herpes, Chlamydia, Gonorrhea, Syphilis or Hepatitis screening for yourself or your partner, you can get tested today by selecting an option below to find an affordable std test clinic near you.
Same day std testing locations also available with results in 1-2 days. Learn more here.

There Are 14 Public Clinics & 25 Private STD Clinics Near You

If you're looking for cheap std testing clinics in the Boerne area to get a HIV, Herpes, Chlamydia, Gonorrhea, Syphilis or Hepatitis screening for yourself or your partner, you can get tested today by selecting an option below to find an affordable std test clinic near you.

Questions about STD Testing?
Call at 1-800-666-1250 ( 8AM-5PM MON-FRI )
Call at 1-800-666-1250 ( 8AM-5PM MON-FRI )
COMPARE TESTS AND PRICING FIND A CLINIC IN Boerne
DISCLAIMER
Safer STD Testing is an informational referral website. It refers customers to nationally reputed private STD Testing service providers (“Preferred Service Providers” or “Advertisers”). Safer STD Testing is not a medical or healthcare professional facility or a provider of any medical or healthcare services. Safer STD Testing gets compensated on net purchase of products or services by our users referred to such Preferred Service Providers. Click here to read our full disclaimer.

What are the STI test options in Boerne,TX?

Boerne, TX, is a city in Kendall County and part of the San Antonio-New Braunfels metro area that's fighting a growing STD epidemic. It's experiencing an increase across several STDs, including chlamydia, gonorrhea, and syphilis.

Kendall County health officials are working hard to reduce the STD outbreak in the area through education, testing, and treatment. They're urging all persons to seek STD testing that are sexually active.

Planned Parenthood South Texas at the South Texas Medical Center on Babcock Rd. in San Antonio is another option.

Description: Religious Organization. The free STD Program is open to the general population.

Description: Social Service Organization. 1st and 3rd Monday of each month the hours are 11am-7pm. Saturday the health center is by appointment only

Medical services at the clinic are accessible at no charge regardless of age, gender, sexual orientation, gender identity, or race. You can schedule an appointment to receive pregnancy- or STD-related care and information.

The clinical personnel can treat some STDs on-site following a positive diagnosis. They may also provide referrals for specialized care when necessary and educate youths on STD prevention.

You may receive referrals to community-based agencies that help individuals apply for Medicaid and financial benefits. Services at the facility may be available in Spanish upon request. The staff offers post-abortion support and may help pregnant women obtain material assistance, including cribs and car seats. 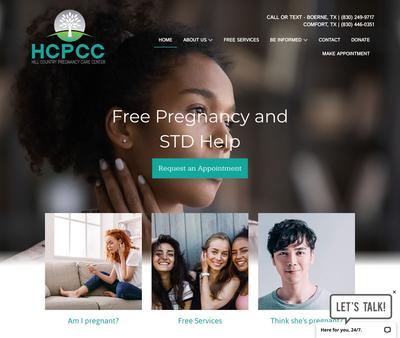 Any Woman Can is a Christian-based agency that strives to empower individuals to make informed decisions when dealing with unintended pregnancies or mental and sexual health issues. The facility offers Chlamydia and Gonorrhea testing and treatment as well as pregnancy evaluations and first-trimester ultrasounds. The clinic also coordinates mental health counseling sessions.

The staff evaluates and treats patients for venereal infections free of charge. Clients don’t need insurance to receive the care they need. You may text or call the clinical team to reserve your sexual health appointment.

You may get a seven-day dose of medications to help cure Chlamydia or a three-month prescription regimen for Gonorrhea. An online contact form may help you request medical advice for your sexual health questions.

Through a partnership with the San Antonio Metro Health District, the facility coordinates a monthly walk-in clinic for STD testing and treatment. Clients may call to know when Metro Health services are available on-site. You can fill out the clinic’s counseling intake forms online. 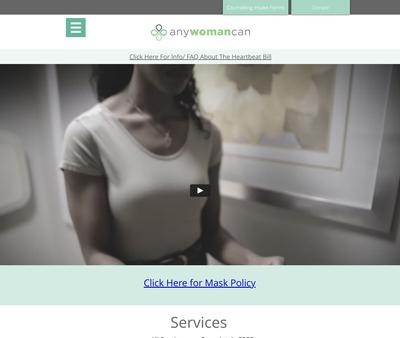 The case management team may help PLWHA join public and private programs such as Medicare Part D, Medicaid, and the State Pharmacy Assistance Program. Medications are conveniently accessible at the in-house pharmacy, and the pharmaceutical personnel can coordinate deliveries upon request. It also provides refill reminders and co-pay assistance. 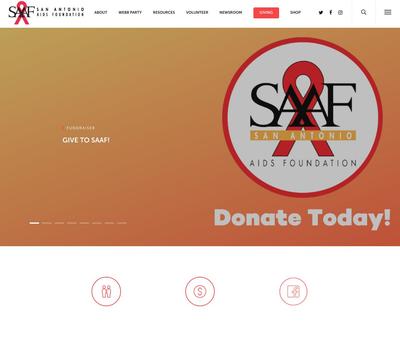 The STD/HIV Clinic facilitates STD evaluations and diagnosis and access to infection management options when necessary. The medical team also offers counseling services and HIV prevention options. Moreover, the clinic is part of the Fast Track Cities initiative, which focuses on enhancing citywide responses to HIV.

Clients should have a photo ID to get HIV/STD screening on-site. The staff serves clients on a walk-in basis and advises individuals to arrive 45 minutes before closing time to ensure they access care. Services are available to Bexar County and San Antonio, TX, residents as well as persons without a means of receiving STD-related healthcare services.

You may call the facility to have a confidential session with the counselors on staff. If you need ongoing medical care for an STD, you may get referrals to a local primary care provider. A nurse practitioner will assess PREP patients. Afterward, a PrEP navigator will provide risk reduction guidance, the client’s financial and insurance overview, and PrEP counseling. 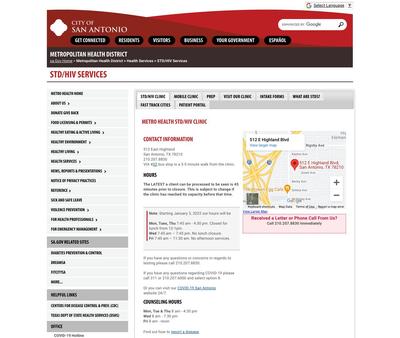