There Are 13 Public Clinics & 5 Private STD Clinics Near You

If you're looking for cheap std testing clinics in the Shelbyville area to get a HIV, Herpes, Chlamydia, Gonorrhea, Syphilis or Hepatitis screening for yourself or your partner, you can get tested today by selecting an option below to find an affordable std test clinic near you.
Same day std testing locations also available with results in 1-2 days. Learn more here.

There Are 13 Public Clinics & 5 Private STD Clinics Near You

If you're looking for cheap std testing clinics in the Shelbyville area to get a HIV, Herpes, Chlamydia, Gonorrhea, Syphilis or Hepatitis screening for yourself or your partner, you can get tested today by selecting an option below to find an affordable std test clinic near you.

Questions about STD Testing?
Call at 1-800-666-1250 ( 8AM-5PM MON-FRI )
Call at 1-800-666-1250 ( 8AM-5PM MON-FRI )
COMPARE TESTS AND PRICING FIND A CLINIC IN Shelbyville
DISCLAIMER
Safer STD Testing is an informational referral website. It refers customers to nationally reputed private STD Testing service providers (“Preferred Service Providers” or “Advertisers”). Safer STD Testing is not a medical or healthcare professional facility or a provider of any medical or healthcare services. Safer STD Testing gets compensated on net purchase of products or services by our users referred to such Preferred Service Providers. Click here to read our full disclaimer.

What are the STI test options in Shelbyville,KY?

It may be appropriate to book an earlier appointment for free STD testing services in a hospital within Shelbyville, KY. Still, some clinics may not prescribe treatment, and you may wait for long as the results might not be immediate.

Out of the numerous medical centers within the home rule-class city, you might consider scheduling an appointment with ALC Shelbyville | Pregnancy Care Center, Baptist Health Urgent Care, and UofL Health - Shelbyville Hospital.

Description: Need to enroll as a patient in order to receive services. Photo ID is required at check-in. Walk-ins accepted daily until 3:30pm, appointment preferred.

Description: Public Health Department/Social Services Department, HPV vaccines provided for those 18 and under through the VFC program.

Description: Need to enroll as a patient in order to receive services. Photo ID is required at check-in. Walk-ins welcome until 3:30pm daily, appointment recommended.

Please use the map to find a public clinic in Shelbyville, Kentucky
GO TO CLINIC LISTINGS ABOVE
STD STATISTICS

Norton Community Medical Associates in Shelbyville is a non-profit hospital and a subsidiary of North Healthcare, serving the people in and around Louisville, Shelby, and Southern Indiana.

Health professionals allow people to pay for medical services using credit or debit cards. Patients unable to cover their medical expenses can qualify for payment arrangements or apply for major or minor services financial assistance. Online payments and health insurance coverage from multiple carriers and companies are also acceptable by the professionals at the billing office.

The infectious disease physicians offer antiretroviral therapy for HIV-infected patients to reduce the viral load and preserve their immune system. They also treat individuals with Hepatitis B and C and STDs. People at substantial risk of acquiring HIV through pre-or-post exposure to the virus can access PrEP and PEP medications for prevention.

People with limited English proficiency or other communication challenges can receive face-to-face, phone, or virtual interpreter services. The facility has pastoral care offering spiritual and emotional support and religious and spiritual resources for patients and families dealing with psychological issues.

A gift shop is also open for individuals to get flowers, stuffed animals, balloons, and other presents for their loved ones in the hospital. 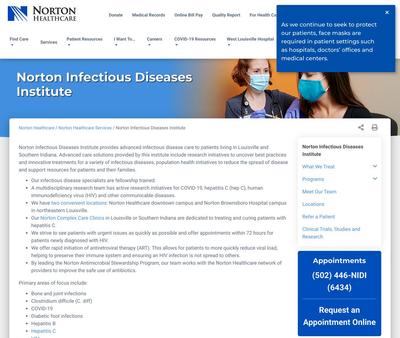 Founded in 1924, Baptist Health is a health system with numerous hospitals, outpatient facilities, physician practices, and urgent care clinics in Louisville and beyond.

The not-for-profit health care center has qualified and certified medical professionals that provide quality and compassionate care for healthy communities. Its services are not limited to cancer care, primary care, heart care, diabetes care, and immunizations that protect against Hepatitis and HPV.

The health center provides a secure and convenient way to pay medical bills online using MasterCard, Visa, and Discover. Patients unable to offset their medical expenses might be eligible for financial aid or payment arrangements. Plus, the services in the facility are accessible to all regardless of race, nationality, disability, or gender identity.

The health professionals at the medical center administer HPV, Hepatitis A, and Hepatitis B vaccines for age-appropriate groups. They help children and adults to keep up-to-date with the recommended vaccine schedule.

Patients of Baptist Health can sign up for a MyChart Patient portal account to manage their appointments, access lab results, and view current medications online through their internet-enabled devices.

Language assistance and communication aids are available for people with difficulties communicating in English, deaf, blind, or sensory impairment for better health experience or outcome. 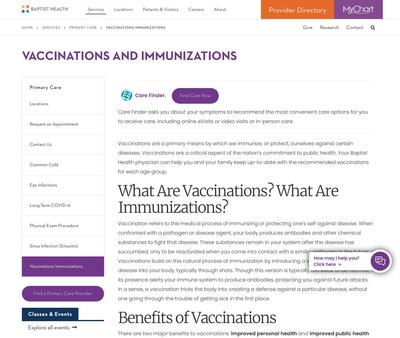 UofL Health Shelbyville Hospital is one of the UofL health hospitals that provides patient-centered, compassionate, quality, and competent care to people in Shelbyville and beyond.

Its experienced and qualified physicians offer state-of-the-art health for healthier communities. They specialize in diagnosing and treating numerous diseases and conditions, including HIV, Hepatitis C, and STDs.

The staff at the front office permit people with insurance coverage from most insurance companies to access care. It also offers financial assistance and set up payment plans for individuals facing economic challenges unable to pay their bills. Self-pay patients can make their payments online, by mail or phone, or in person.

The infectious disease specialists at the health center offer treatment for HIV-infected patients to suppress their viral loads to untransmittable levels. The physicians also support the research on HIV to find advanced therapies that are more effective in treating PLWHA. 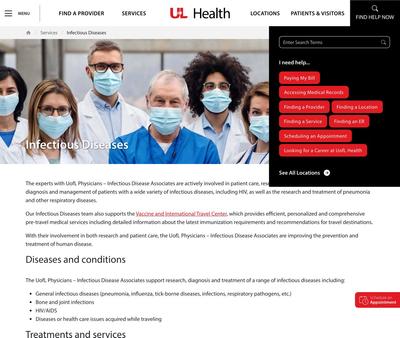 Children who are eligible for Vaccines for Children can access age-appropriate immunizations. The clinic partners with various insurance providers and allows uninsured patients to pay on an income-based sliding fee scale.

The clinicians treat patients diagnosed with Chlamydia, Gonorrhea, Hepatitis C, HIV, Syphilis, Herpes, and Trichomoniasis by appointment. They might provide counseling for STI-infected individuals. Vaccines offered at the facility include Hepatitis A and B and HPV.

Pregnant and postpartum women, infants, and children below the age of five at high risk of nutritional risk can receive supplemental foods, care referrals, and breastfeeding support. 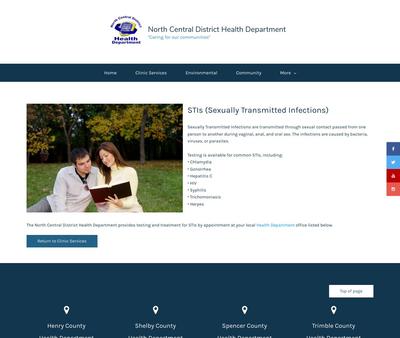