There Are 17 Public Clinics & 4 Private STD Clinics Near You

The capital city of New York shares the challenges of the nation with the rising rates of STDs. Keep yourself safe by understanding the rates of infection around you and where you can get tested.

If you're looking for cheap std testing clinics in the Albany area to get a HIV, Herpes, Chlamydia, Gonorrhea, Syphilis or Hepatitis screening for yourself or your partner, you can get tested today by selecting an option below to find an affordable std test clinic near you. Same day std testing locations also available with results in 1-2 days. Learn more here.

COMPARE TESTS AND PRICING
FIND A CLINIC IN Albany

What are the STI test options in Albany,NY?

The city faces an especially high STD prevalence across the Northeast area. Statewide there was a rate of 552.8 for chlamydia and 146.5 for gonorrhea per 100,000 residents.

Albany County accounted for 459 cases of gonorrhea, 24 cases of HIV, and 60 cases of early stage syphilis in 2016.

In response, health professionals are calling for more widely offered and standardized STD testing, as well as the distribution of free condoms and needles to prevent further spread of these diseases. Free STD testing is something else health officials are pushing for, though it is still not readily available.

In Albany you can find testing services at Whitney Young Health on Lark Drive, the Albany County Department of Health on Green Street, and at the Pride Center of the Capital Region on Hudson Avenue.

HIV testing for youth 24 and under

Community Based Organization. Anyone can come in to receive services. No one will be turned anyone away

Public Health Department/Social Services Department. Anyone 12 years of age or older, who is a resident of Albany County, or is a student attending college in Albany County, is eligible to be seen in the STD clinic. Please bring a picture ID and proof of address

Social Service Organization. If you are uninsured, you may qualify for a state-funded program or a lower fee scale. Please bring the following documents: birth certificate or passport, 4 most recent weeks' pay stubs, official photo ID, proof of New York State residence

Social Service Organization. If you are uninsured, you may qualify for a state-funded program or a lower fee scale. Please bring the following documents: birth certificate or Passport, 4 most recent weeks' pay stubs, official photo ID, and proof of NY State residence. Transgender and gender non-conforming services including pubertal suppression and hormone therapy available

Not Sure Which Option Is Best For You? Let us point you in the right direction for STD testing in Albany, NY

Statistics reported is based on publicly available data sources such as CDC for Albany County, NY. Data is normalized to accurately report Albany County STD Breakdown.

The capital city is not only seeing the number of Chlamydia and Gonorrhea incidents increasing, but Syphilis and HIV diagnoses are also increasing in frequency. From 2011 to 2016 the rate for HIV increased from 404 to 430. The statistics also show that this potentially deadly virus is affecting residents off all ages and ethnicities.

Even though some of these rates were expected to be high in teens and young adults, they were surprised by the growing number of chronic Hepatitis B incidents. In 2014 there were 77 cases reported, and since this disease is easy to spread these numbers are expected to rise.

Syphilis incidents are increasing in older men, and this also means that they are at risk for contracting the other STDs. With the number of reported cases rising it is important that everyone understands how important regular STD testing is for good sexual health. 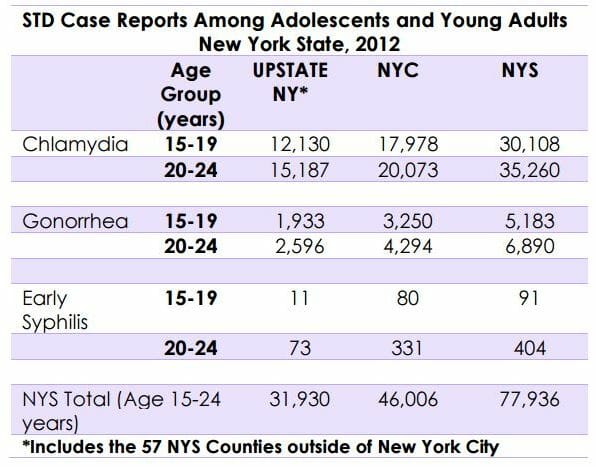 In 2012 an independent study found that the sex education programs currently being offered in the public school systems do not contain the information students need to protect themselves from sexually transmitted diseases.

The study also found that the information included varies in the schools, and that it is not always pertinent to the problems teens are facing nor is it accurate. This is putting students’ health at risk and that of their families. One public school has even excluded all mentions of female genitalia from its sex education program choosing to refer to it as a “sperm deposit” instead.

While some parents and educators do find this degrading, currently there are not any steps being taken to change the way sex education is handled in the city’s schools.

Students are encouraged to practice abstinence, and it is not uncommon for educators to make those who are sexually active feel ashamed and embarrassed. Since the proper use of contraceptives is not covered in the programs, most teens are unaware of any risks or dangers their behavior might be putting them in. When all of this is combined it is not hard to see why the STD rate among teens and young adults is so high in the capital city.

The current sex education programs also do not cover the importance of regular Herpes testing in Albany, even though the virus is increasing in frequency in the public schools. Regular HIV testing in Albany is also not discussed, and many health officials are blaming this on the increasing number of residents who are contracting the disease each year.

The main contributing factor is the lack of available information, along with the fact that some of it is not even accurate. Very few schools include any information on the importance or proper use of contraceptives, and discussions on regular testing is excluded from the programs. Some do not even employ medically accurate terms, and this often leads to confusion among students.

Many teens do not even realize that their behavior is putting their sexual health at risk. Since most teens and young adults do not even know how STDs are spread the health of those around them is also at risk.

In the last few years the state and capital city have also been forced to cut funding that was earmarked for community clinics and health centers. The clinics that are still open frequently have long lines and this can make it difficult for residents to find time in their busy schedules to spend the day at the clinic.

Instead of worrying, you can get same day testing and results at many STI clinics scattered around Albany. The environment is discreet, and your privacy will be protected. Easy and affordable, even for residents with no-insurance, once your finished it’ll feel like a weight has been lifted from your shoulders.

Other Cities Near Albany, New York