There Are 6 Public Clinics & 4 Private STD Clinics Near You

If you're looking for cheap std testing clinics in the New Haven area to get a HIV, Herpes, Chlamydia, Gonorrhea, Syphilis or Hepatitis screening for yourself or your partner, you can get tested today by selecting an option below to find an affordable std test clinic near you.
Same day std testing locations also available with results in 1-2 days. Learn more here.

There Are 6 Public Clinics & 4 Private STD Clinics Near You

If you're looking for cheap std testing clinics in the New Haven area to get a HIV, Herpes, Chlamydia, Gonorrhea, Syphilis or Hepatitis screening for yourself or your partner, you can get tested today by selecting an option below to find an affordable std test clinic near you.

Questions about STD Testing?
Call at 1-800-666-1250 ( 8AM-5PM MON-FRI )
Call at 1-800-666-1250 ( 8AM-5PM MON-FRI )
COMPARE TESTS AND PRICING FIND A CLINIC IN New Haven
DISCLAIMER
Safer STD Testing is an informational referral website. It refers customers to nationally reputed private STD Testing service providers (“Preferred Service Providers” or “Advertisers”). Safer STD Testing is not a medical or healthcare professional facility or a provider of any medical or healthcare services. Safer STD Testing gets compensated on net purchase of products or services by our users referred to such Preferred Service Providers. Click here to read our full disclaimer.

What are the STI test options in New Haven,IN?

New Haven is a city in Adams, St. Joseph, and Jefferson townships within Allen County. According to the county’s health rankings, it’s evident that there was a significant increase in the rate of new HIV infections between 2017 and 2019. In the former year, the rate stood at 444 in every 100,000 persons, while in 2019, public health officials recorded HIV diagnoses at a rate of 516 per 100,000 population.

Public health administrators have implemented many strategies to prevent the further spread of HIV and STDs in New Haven, IN. For instance, they have taken advantage of the state-funded Capacity Building Assistance program that seeks to strengthen community planning for HIV/STD prevention, improve community access and utilization of prevention resources, and to enhance the effectiveness of HIV prevention interventions.

Note, free STD testing may be available, but only if you qualify. Also, some clinics may charge you additional doctor’s consultation fees.

Description: Public Health Department/Social Services Department. Minimal charge for STD services and an ID is required. Cash or insurances accepted, may call for cost estimate. High School Students with ID: $10 fee includes exam and medications if needed. The Department of Health also provides free HIV testing every Wednesday from 11am-1pm at Walgreens at 110 E Creighton Ave. During COVID-19, pre-screening for COVID-19 symptoms is done when scheduling appointment and patients are asked to wear a face mask when they arrive at the clinic. Closed for lunch: 12noon-1pm. By appointment only

Description: Community Based Organization. HIV walk-in testing every Friday from 2pm-4:30pm - other days/times by appointment

Description: Although prefer appointments will try to see you if you walk in

Description: Must be registered as a patient to receive services.

Please use the map to find a public clinic in New Haven, Indiana
GO TO CLINIC LISTINGS ABOVE
STD STATISTICS

STD Statistics In Allen County, IN

A Hope Center at S. Calhoun

A Hope Center at S. Calhoun is an accredited center that serves men and women in the New Haven area. The center provides pregnancy testing, support services, ultrasounds, and STD testing to promote women's sexual, reproductive, and emotional health. The clinic offers options of adoption, abortion, and parenting to pregnant women

The services at the healthcare center are free thanks to financial donations from willing people and organizations through Kroger Plus Card, Guidestar, and Amazon Smile.

The professional staff at A Hope Center creates a safe and non-judgmental environment for women to share their concerns and goals. It also provides men's counseling services to educate men with pregnant women on parenting and fatherhood. 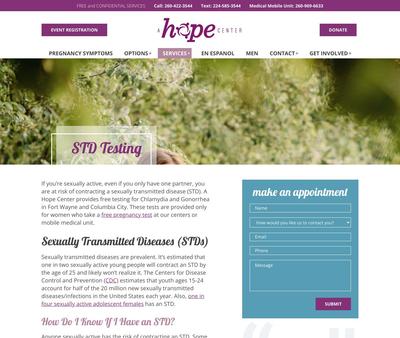 Parkview Infectious Disease is a not-for-profit health system that has been improving health and inspiring the well-being of northeast Indiana residents since 1995.
It has well-versed specialties and physicians providing various services, including pediatric, pain management, dermatology, and behavioral health. The medical providers also use their expertise and diagnostic tools to diagnose and treat infectious diseases like HIV and Hepatitis.

Patients from families with income that does not exceed twice the Federal Poverty Guidelines might get financial assistance. The clinic allows online payments and estimates out-of-pocket costs for individuals to make informed care decisions. It also accepts most medical insurance coverage.

The primary care physicians develop a treatment plan suitable for Hepatitis B and C positive patients. They refer HIV-positive patients to board-certified infectious disease specialists for long-term care that best suits their needs.

Virtual Health is available in Parkview Infectious Disease, allowing patients to receive care and communicate to their doctors through an internet-enabled computer or smartphone. Patients can also request copies of their medical reports via fax, mail, or the MyChart portal. 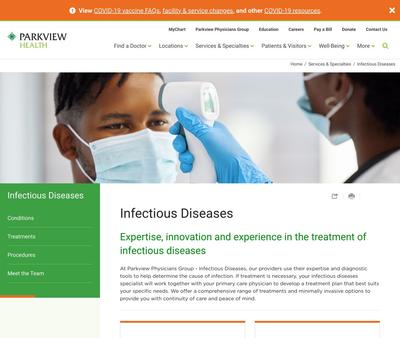 Positive Resource Connection is a non-profit organization that serves Allen County and the neighboring northeast counties. Its multidisciplinary team provides compassionate and stigma-free services for people diagnosed with HIV, Hepatitis, and STDs to encourage vulnerable groups such as men who have sex with men to come out for testing, counseling, and treatment.

The health clinic has a Direct Emergency Financial Assistance Program that helps eligible patients to pay their medical bills. The clinic also receives funds from various organizations such as Maximus Foundation, PHP Foundation, and the State Department of Health that facilitate its services. 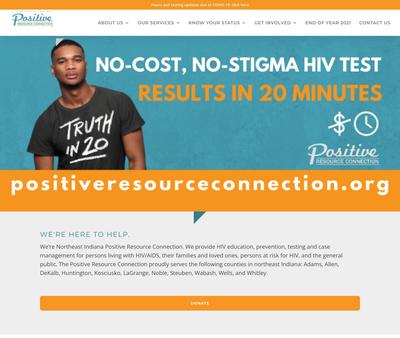 Founded in 1842, the Allen County Department of Health has worked to improve quality of life and prevent diseases in and around New Haven.

The health department allows online payments, and no is denied STD/HIV services because of their inability to pay. Also, a sliding fee scale is available for low-income patients.

The medical professionals investigate, monitor, and treat STDs, including Chlamydia, Gonorrhea, and Syphilis. HIV-positive patients access treatment to suppress the viral load to an undetectable level. Trichomoniasis treatment is available for female patients only. The clinic also provides safe vaccines for Hepatitis A and B and HPV. The health center has trained staff offering STD counseling.

The Allen County Department of Health has a patient portal that allows clients to communicate with doctors, access their medical records, update personal information, receive test results, and request prescriptions. The medical clinic also offers a free parking space to its patients and visitors. 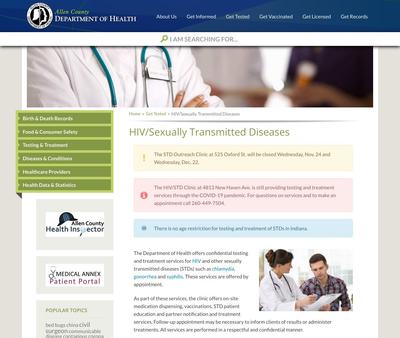