There Are 154 Public Clinics & 146 Private STD Clinics Near You

If you're looking for cheap std testing clinics in the Yeadon area to get a HIV, Herpes, Chlamydia, Gonorrhea, Syphilis or Hepatitis screening for yourself or your partner, you can get tested today by selecting an option below to find an affordable std test clinic near you.
Same day std testing locations also available with results in 1-2 days. Learn more here.

There Are 154 Public Clinics & 146 Private STD Clinics Near You

If you're looking for cheap std testing clinics in the Yeadon area to get a HIV, Herpes, Chlamydia, Gonorrhea, Syphilis or Hepatitis screening for yourself or your partner, you can get tested today by selecting an option below to find an affordable std test clinic near you.

Questions about STD Testing?
Call at 1-800-666-1250 ( 8AM-5PM MON-FRI )
Call at 1-800-666-1250 ( 8AM-5PM MON-FRI )
COMPARE TESTS AND PRICING FIND A CLINIC IN Yeadon
DISCLAIMER
Safer STD Testing is an informational referral website. It refers customers to nationally reputed private STD Testing service providers (“Preferred Service Providers” or “Advertisers”). Safer STD Testing is not a medical or healthcare professional facility or a provider of any medical or healthcare services. Safer STD Testing gets compensated on net purchase of products or services by our users referred to such Preferred Service Providers. Click here to read our full disclaimer.

What are the STI test options in Yeadon,PA?

The Delaware County Health Department has come up with a continuum of HIV/STD prevention and care services that is efficient and cost-effective for PLWHA and other STDs, including those at risk of contracting. The Delaware Division of Public Health offers direct services to PLWHA and other STDs or gives contracts to community-based organizations to deliver HIV/STDS services.

Individuals at risk of STDs can take advantage of certain Health centers in Yeadon, PA, for free STD testing. The challenge is that these facilities are scarce and may only serve certain groups of persons.

Description: Hepatitis testing only with insurance.

Description: Public Health Department/Social Services Department. City of Philadelphia residence except for Public Health issues. Some services are available on a walk-in basis

Description: Appointments by walk-in and by scheduled appointment.

Description: Community Based Organization. No restrictions. For information about additional services Action Wellness provides, please call our Main Office at 215-981-0088.

AHF Wellness Center - Philadelphia seeks to prevent the spread of HIV and STDs by providing quality and accessible screening and treatment services. The clinical staff uses blood, saliva, and samples from urine or rectum to screen for STDs and perform finger stick tests for HIV. The testing session takes approximately 30 minutes, and clients can expect their test results within three to seven working days.

Everyone is welcome for free, confidential HIV/STD testing irrespective of their insurance status. Before your visit, you should contact the testing site to confirm wait times and the opening hours.

The friendly and caring testing counselors on staff walk patients through the screening process. If you need PrEP/PEP or would like free condoms mailed to your location, you should contact the clinical personnel. Patients who can’t get to the center can access HIV/STD services on the mobile unit. 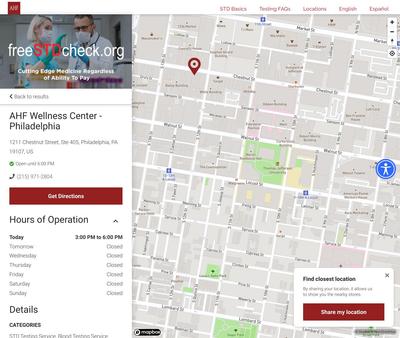 Mazzoni Center Washington West was created in 1979 as Lavender Health to address the challenges faced by PLWHA among the LGBTQ+ community. It has expanded over the years to include primary care, medical case management, mental health counseling, and substance use disorder treatment. The medical professionals coordinate onsite rapid HIV testing, prevention, and care. STD screening is also available.

The facility offers free HIV/STD testing to patients from all walks of life. MSMs or transgender persons 16 years and above qualify for navigation services. Clients should pre-schedule appointments.

The clinicians counsel patients to help them learn their HIV/STD risks and ways of protecting themselves from infections. They also offer PrEP and PEP navigation assistance and treat patients with Hepatitis C. If you test HIV-positive, the linkage-to-care specialist will assist you in accessing medical care, notifying your partner and loved ones of your status, and discussing safer sex options and treatment adherence.

Patients can have free at-home HIV test kits delivered to their doorsteps at no cost or pick up the kits onsite. Navigation specialists hold one-on-one consultations to identify your health goals and provide sexual health information and free condoms, referrals for behavioral health and primary care, and linkage to gender-affirming services. The facility has a full-service pharmacy onsite, offering low-cost medications to insured patients through the 340B drug discount program. 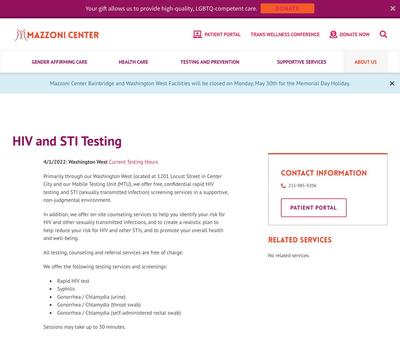 HIV/STD and Hepatitis C testing are open to all individuals. Philadelphia residents can have free at-home HIV testing kits mailed to them on request.

If you test HIV/STD or Hepatitis C-positive, the team can refer you to providers for treatment. Patients receive counseling to help them lead productive lives. Medical case managers assist HIV patients in accessing care, adhering to treatment, and obtaining resources to promote their health. 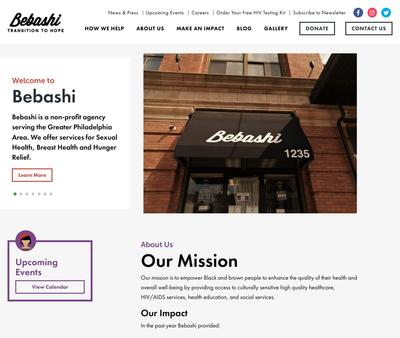 Philadelphia Health Center 1 operates under the Philadelphia Department of Public Health and features an STD Program that curbs the spread of sexually transmitted infections in Philadelphia, PA. Individuals seeking STD testing and treatment can contact the center. The facility also offers STD education to the community.

Male and female patients above 13 years of age are welcome for free, confidential STD testing and treatment on a first-come-first-serve basis. You should call to confirm the clinic's hours of operation before visiting.

Medics prescribe PEP medication to individuals exposed to HIV and PrEP to at-risk HIV-negative clients interested in the option. They treat STD-positive patients and administer Hepatitis A, B, and HPV vaccines to protect individuals against diseases. Additionally, they discuss available treatment therapies with HIV-positive clients.

The clinical team can help patients apply for insurance plans that fit their budgets. It offers referrals, testing, and treatment for partners of STD-positive clients. Patients can schedule appointments and access their health information via the HealthCenterConnect patient portal. Free condoms are accessible at the clinic. 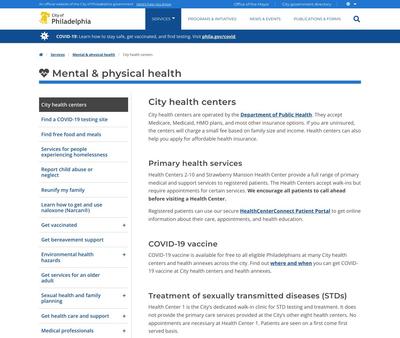 The center opens at 1:00 pm on the first Wednesday of every month