There Are 14 Public Clinics & 19 Private STD Clinics Near You

If you're looking for cheap std testing clinics in the Gulf Gate Estates area to get a HIV, Herpes, Chlamydia, Gonorrhea, Syphilis or Hepatitis screening for yourself or your partner, you can get tested today by selecting an option below to find an affordable std test clinic near you.
Same day std testing locations also available with results in 1-2 days. Learn more here.

There Are 14 Public Clinics & 19 Private STD Clinics Near You

If you're looking for cheap std testing clinics in the Gulf Gate Estates area to get a HIV, Herpes, Chlamydia, Gonorrhea, Syphilis or Hepatitis screening for yourself or your partner, you can get tested today by selecting an option below to find an affordable std test clinic near you.

Questions about STD Testing?
Call at 1-800-666-1250 ( 8AM-5PM MON-FRI )
Call at 1-800-666-1250 ( 8AM-5PM MON-FRI )
COMPARE TESTS AND PRICING FIND A CLINIC IN Gulf Gate Estates
DISCLAIMER
Safer STD Testing is an informational referral website. It refers customers to nationally reputed private STD Testing service providers (“Preferred Service Providers” or “Advertisers”). Safer STD Testing is not a medical or healthcare professional facility or a provider of any medical or healthcare services. Safer STD Testing gets compensated on net purchase of products or services by our users referred to such Preferred Service Providers. Click here to read our full disclaimer.

What are the STI test options in Gulf Gate Estates,FL?

The city of Gulf Gate Estates, Florida, in Sarasota County, sits on the Gulf Coast and is a popular tourist area. Unfortunately, it's also undergoing an STD outbreak that's getting worse. The statistics show a rise across the board, with chlamydia and gonorrhea being the most commonly reported STDs in the city.

Although it's not as prevalent as chlamydia and gonorrhea, syphilis is on the rise, too. In 2016, the county reported 58 total syphilis cases, and, in 2019, it more than doubled to 119.

County health officials are sounding the alarm in Sarasota, and Gulf Gate Estates is part of the announcement. They're requesting residents be more vigilant and seek out regular STD testing to reduce the spread of these preventable diseases.

Several options are available for anyone seeking STD testing in Gulf Gate Estates, FL. Fast Screenings are available in Sarasota at the AFC Urgent Care clinic on S. Tamiami Trail.

Another choice is Solstice Health and Wellness on S. East Ave in Sarasota. Both locations offer comprehensive on-site testing, and many include treatment and follow-up care.

Some sites list free STD testing. Before jumping at these services, learn more about the location. Some free centers limit the available tests rather than officering comprehensive screenings, and it may take longer to get test results.

Description: Public Health Department/Social Services Department. Accept some private insurance and most Medicaid plans. For those without insurance, fees are based on income and family size. Above hours are for HIV/AIDS services (by appt. only). Visit website for specific walk-in hours for STD services

Please use the map to find a public clinic in Gulf Gate Estates, Florida
GO TO CLINIC LISTINGS ABOVE
STD STATISTICS

CARES Outreach Services, Inc offers education, prevention, and health resources to people in Gulf Gate Estate and the surrounding communities. The facility collaborates with the Florida Department of Health to form various programs such as the C4P3 to prevent the spread of sexually transmitted infections. Its services are not limited to health screenings for Hepatitis C, STDs, and HIV.

HIV and STD testing services at the health center are at no cost. It is open to all sexually active people that want to learn about their sexual health status regardless of their insurance status, age, or gender.

The health professionals at the health center offer HIV testing and counseling services and link people diagnosed with the disease to care in other healthcare agencies.

They provide a High Impact Prevention Program that increases HIV and STD awareness and distributes condoms to prevent the infections. The clinic also offers to test for STDs to help physicians make the correct diagnoses and prescribe effective medical therapies.

It also offers educational presentations on obesity, cholesterol, and diabetes to promote healthy people and communities. The facility partners with Hedges Health Mart Pharmacy to review prescriptions or medicines. 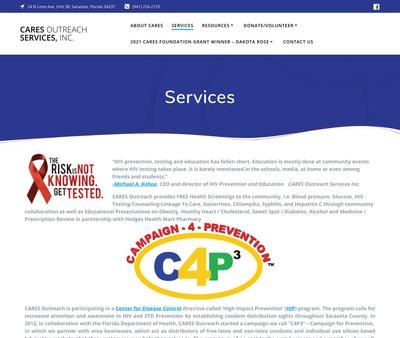 The gynecological department also offers family planning, an annual physical exam that includes a pelvic exam and breast exams, and diagnosis and treatment of several diseases, including vaginal lesions and STDs.

Gynecologists at the facility offer medications that treat women diagnosed with STDs to prevent major health problems like infertility. They also vaccinate vulnerable girls and women to protect them against Herpes and Hepatitis B.

All Women's Health Center of Sarasota, Inc. supports Diet Programs that help women control their weight for better health. The program assists clients in developing an exercise program that fits their lifestyle.

Birth control methods such as diaphragm, IUD, mini pills, emergency pills, tubal ligation, and shots are also available for women that want to space their children by preventing unplanned pregnancies. 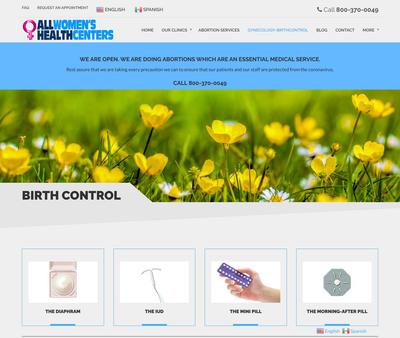 CAN Community Health - Sarasota is a not-for-profit health organization serving the healthcare needs of people affected and infected by HIV for more than 26 years.

CAN Community Health - Sarasota offers Home HIV self-test kits to people that want to have the tests in their homes for maximum confidentiality. It also has telehealth services that allow patients to access medical and support services through internet-enabled phones, tablets, or computers.

The HIV education program ensures schools in the area get the latest information about HIV by holding events and community awareness activities to reach out to vulnerable people such as teens and the minority populations. 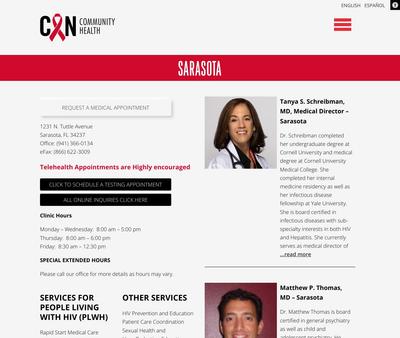 Department of Health in Sarasota County

The Department of Health in Sarasota County promotes and protects the health of its residents and visitors through education and prevention services.

The walk-in STI services available at the public health department are free. People with comprehensive services that require an appointment pay the charges on a sliding fee scale based on income. The staff at the clinic do not turn people away due to their inability to pay. Additionally, minors between 12 and 17 years don’t need parental consent to access the STD Clinic. Parental permission only applies to kids that want HIV tests.

The Department of Health in Sarasota County has on-site laboratory services for people to get tested to aid with diagnosis and prognosis. Its HIV/AIDS Prevention education and risk reduction services include providing condoms and educational materials that prevent the transmission of the infections. 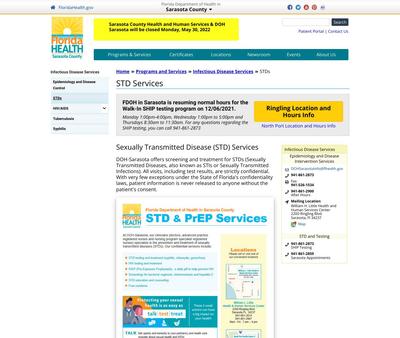