There Are 38 Public Clinics & 33 Private STD Clinics Near You

Brandon, Florida, is home to the Hillsborough County Fair. Don’t let STD complications keep you away from the fun. Get tested regularly at a clinic near you.

If you're looking for cheap std testing clinics in the Brandon area to get a HIV, Herpes, Chlamydia, Gonorrhea, Syphilis or Hepatitis screening for yourself or your partner, you can get tested today by selecting an option below to find an affordable std test clinic near you. Same day std testing locations also available with results in 1-2 days. Learn more here.

COMPARE TESTS AND PRICING
FIND A CLINIC IN Brandon

What are the STI test options in Brandon,FL?

Part of the Tampa metropolitan area, Brandon shares in that city’s STD problems to some extent. In 2015, there were 6,504 people living with HIV or AIDS in Hillsborough County, with a prevalence rate of 579 per 100K people. Health officials are worried about all the people still out there who don’t know they are infected and may be unknowingly infecting others.

There is still a lot of stigma surrounding HIV, especially directed toward gay and bisexual men, and this may make people reluctant to come in for testing. But medical professionals are discreet and only want to help you. Treatment is available if you do turn out to be HIV-positive.

Brandon only has a few STD-testing clinics, but there are many more options if you can get to Tampa (and there may be more free STD testing available in Tampa). MedExpress Urgent Care on Brandon Blvd offers STD testing, and the Walgreens Healthcare on the same street offers basic STI screenings.

In order to receive social services must become a client; HIV testing available to the general public. Free condoms available

Not Sure Which Option Is Best For You? Let us point you in the right direction for STD testing in Brandon, FL

Not only are Chlamydia and Gonorrhea rates rising, but so are primary and secondary Syphilis incidents. STDs are not just affecting one ethnic or age group, these transmittable viruses are a health risk for everyone. While teens and young adults still test positive for Chlamydia and Gonorrhea more often than other groups,  It is statistics like these that show STDs can and will affect anyone regardless of age or gender.

Some local leaders point out that STD rates in the county have always been high, but that this does not necessarily mean that residents in this small city are at risk. With an estimated 531.5 out of every 100,000 people in the area infected with a sexually transmitted disease, it seems clear that is a health epidemic that affects everyone.

Some of the statistics over the past twenty years that indicate that this is a problem for everyone, regardless of where the live include, 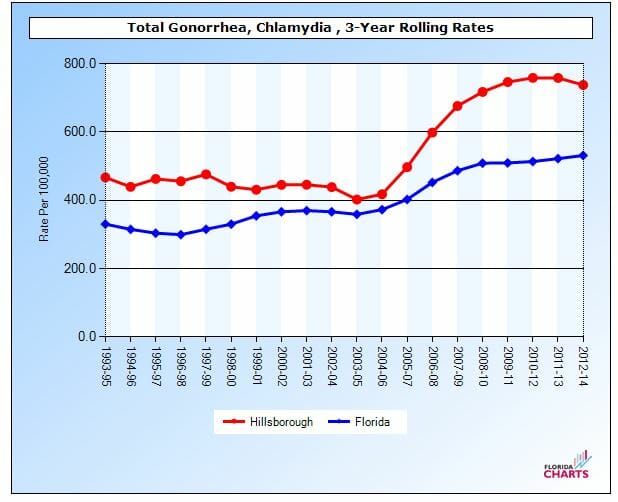 Even though the Tampa metro area has the highest HIV rate in the state, this school year ended without any comprehensive sex education programs in place in the classroom. Like many of school districts across the nation, sex ed. is not required and often not even offered, it is left strictly up to parents to decide what their children need to know. Students are encouraged to abstain from any type of sexual activity until marriage, but they do not receive any information on contraceptives or STD testing.

Without these important classes most students do not know that STDs can be spread through methods other than sex, but this is changing regarding HIV. Medically accurate information on the spread of HIV is covered in health class, but there is still no mention of being tested.

Regular HIV testing in Brandon is one of the best ways to prevent the spread of the disease, along with always practicing safe sex. Regular Herpes testing in Brandon is also important, especially for students and their families. If everyone got tested the STD rates would start to drop, which would benefit everyone in the area.

This bedroom community can blame part of its high STD rate on its close proximity to Tampa, but simply be part of the city’s metro area is not the only reason residents are dealing with an increasing number of STDs.

The main reason that the number of sexually transmitted infections has been climbing is due to a simple lack of education. Residents not only do not understand all of the ways these viruses can be spread, many aren’t even aware that they are putting their health at risk. Often teens become sexually active without using a condom, and the lack of information has also lead to several misconceptions.

Some teens and even older adults believe a STD would never happen, while others think that it is okay to not use protection when they know the person that they are with. As long as these and other misconceptions are allowed to continue the number of people that test positive will keep rising.

With the excitement of the big city nearby, along with some great beaches it can be hard to make yourself stand in line at the clinic just to be tested for STDs. This is an important step towards ensuring your good health, and now there is an easier way to get tested for STDs. STI testing centers are an affordable alternative to hectic HIV & AIDS clinics. Get your results quickly and then work on your tan.

Other Cities Near Brandon, Florida