Free STD Testing in the State of Louisiana

There Are 77 Public Clinics & 27 Private STD Clinics Near You

If you're looking for cheap std testing clinics in the state of Louisiana to get a HIV, Herpes, Chlamydia, Gonorrhea, Syphilis or Hepatitis screening for yourself or your partner, you can get tested today by selecting an option below to find an affordable std test clinic near you. Same day std testing locations also available with results in 1-2 days. Learn more here.

What are the STI test options in Louisiana?

Louisiana has New Orleans, creole food, sweet crawfish and gambling but having the highest rate of Sexually Transmitted Diseases (STD) like Chlamydia, Gonorrhea, Hepatitis, Herpes, Syphilis, and HIV of any state in America makes regular visits to a STD Clinic vital. There are free STD testing centers throughout Louisiana where you expect long waits that can result in an embarrassing encounter with a friend or neighbor. There are better choices, clinics where you make a convenient appointment for fast, private STD testing. It will take less then 20 minutes and leave you time to make memories and meet new friends in the French Quarter.

. Please note that not all procedures may qualify for sliding fee discount

Not Sure Which Option Is Best For You? Let us point you in the right direction for STD testing in , LA

STD Statistics for the State of Louisiana

Statistics reported is based on publicly available data sources such as CDC for LA. Data is normalized to accurately report Louisiana STD Breakdown. Demographic breakdowns are based on STD reporting available at the state level.

Named after French king Louis XIV, Louisiana has made the news in the last decade for hurricanes and winning football teams, but in 2015 it topped a list that made tourism officials cringe. According to the data collected by the Center for Disease Control and Prevention (CDC), it is the #1 state where you’re most likely to catch an STD (followed by Mississippi, Georgia and Alabama). CDC data showed STD infection rates in the state to be 4th for Chlamydia, 2nd for Gonorrhea, 3rd for Syphilis.

The data clearly shows the growth in STD cases and specific increase in young females. Some additional statistics collected by the CDC and the Louisiana Department of Health that show the importance of being tested for STDs include: 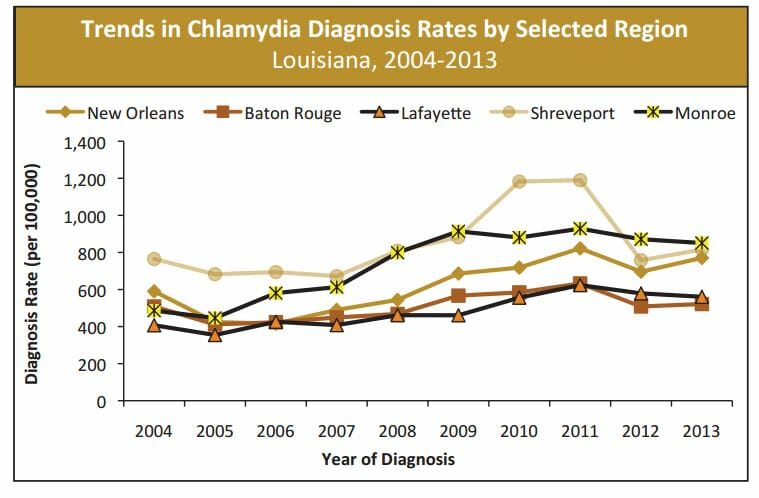 Public schools are required to instruct abstinence-based sexual education and are prohibited from instructing students about contraception and STDs, moves to bring comprehensive sex education to the entire state have failed.

While state law requires that abstinence instruction, the law does not require programs to discuss condoms and other contraception. Because they receive funds for federal abstinence-only programs, sexuality and sexual health education cannot include information about the benefits of sexually active young adults using condoms and contraception and must teach that sex outside of marriage is likely to have harmful psychological and physical effects. Abstinence-only programs also must emphasize marriage as the only appropriate context for sex.

Gov. Bobby Jindal (R) has been outspoken against reforms to sex education in the state. Under his leadership millions have been cut from the state budget for STD prevention and his administration has blocked the opening of any new Planned Parenthood clinics. Jindal also signed a bill in 2014 that bars educators with Planned Parenthood from delivering instruction about sexual health or family planning.

Recent research on comprehensive sexuality education has shown that young people who receive complete and accurate information about abstinence, contraception and condoms were not more likely to be sexually active or be infected by an STD, but were significantly less likely to cause a teen pregnancy. This information reinforces that regular STD testing that along with HIV testing is crucial to sexual health. Herpes testing is very important since viral infections such as Herpes can be transmitted through asymptomatic casual contact with someone that has no visible symptoms.

The city of New Orleans is currently second only to Baton Rouge for highest sexually transmitted disease rate in the country. The city has a teenage pregnancy rate much larger then most other U.S. cities, and teenage girls call it the number-one reason for dropping out of school.

STD prevention expenditures in the Louisiana Department of Health budget are at their lowest levels since at least 2011 while federal funding for the same costs are the highest they’ve been since 2012. Total prevention expenditures decreased by nearly $2.4 million between 2011 and 2014. State spending decreased from $7.1 million in 2011 to $4.6 million this year, a $2.5 million cut. Revenues collected from Medicaid billings, co-pays and private insurance spent on STD prevention in Louisiana also decreased from $1.3 million in 2011 to $621,245 this year.

STDs affect certain parts of the population disproportionately. Despite only 32 percent of the population being African American, this group is 8 times more likely to be diagnosed with chlamydia, 10 times higher for syphilis and 16 times higher for gonorrhea when compared to whites. Looking away from race and instead at the state’s economic indicators, in 2011 17.9 percent of people were living below the poverty line, with 28.8 percent of this population including children. On top of that, Louisiana was ranked as the unhealthiest state for overall health in 2011 by the United Health Foundation which showed high rates of infant mortality, obesity, and infectious diseases, as well as decreases in high school graduation rates. The resulting pockets of poverty combined with unhealthy behavior and choices are fertile ground for the growth and spread of STDs, particularly in young African Americans. 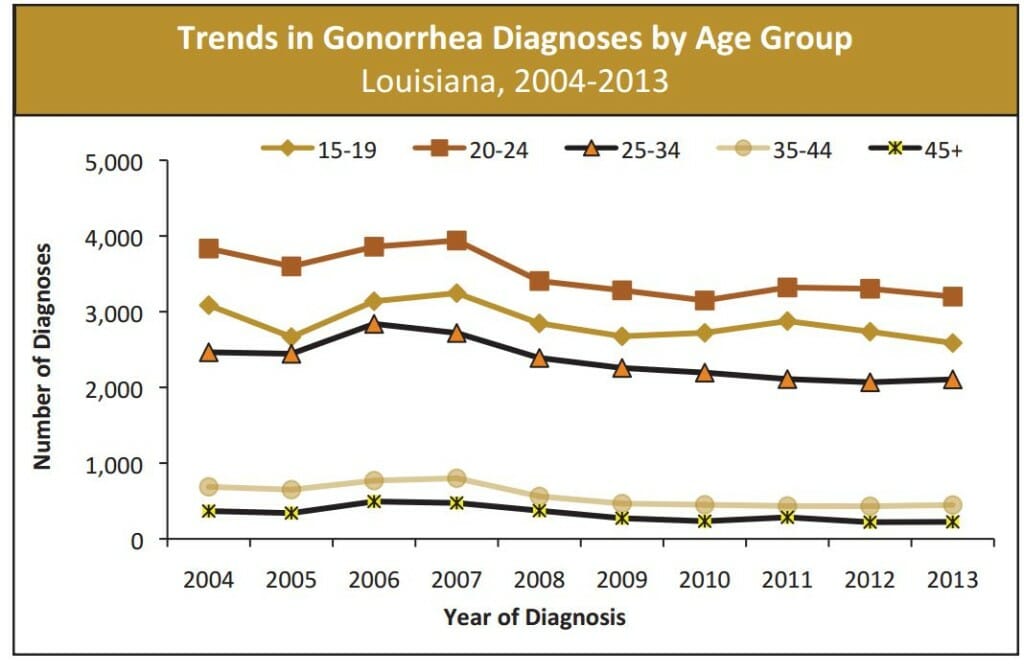 Louisiana is a multi-cultural, multi-lingual state with strong contributions from French, Spanish, Native American, Asian and African cultures. Part of enjoying this melting pot of cultures and cusine is being aware of the increase in sexually transmitted diseases. You should not worry about passing something on to a partner, or the thoughts of spending hours waiting to be seen at a free STD clinic keep you from STD testing. There is a choice that lets you make an appointment for same day STD testing, avoid the hassles and save precious time. Invest 20 minutes for your health and the health of the ones you love, then its off to enjoy the seafood at the Acme Oyster House.