There Are 30 Public Clinics & 38 Private STD Clinics Near You

The city of Surprise is the second-fastest-growing municipality in the Phoenix Metropolitan Area. With a rapidly increasing population came an influx of STDs. Don’t be surprised by an STI, get tested regularly at a clinic near you.

If you're looking for cheap std testing clinics in the Surprise area to get a HIV, Herpes, Chlamydia, Gonorrhea, Syphilis or Hepatitis screening for yourself or your partner, you can get tested today by selecting an option below to find an affordable std test clinic near you. Same day std testing locations also available with results in 1-2 days. Learn more here.

COMPARE TESTS AND PRICING
FIND A CLINIC IN Surprise

What are the STI test options in Surprise,AZ?

The founder of Surprise, Arizona, Flora Mae Statler, would likely be surprised to find out today that the city is booming. Less thrilling, but still notable, is the increase in sexually transmitted diseases.

The city of Surprise belongs to Maricopa County. 526 total new cases of HIV were reported for the county in 2017.

Putting the rate at 12.2 per 100,000 people. Health professionals in the Surprise area recommend regular screening for HIV and STIs, especially since so many bacterial infections don’t present symptoms.

The rate of chlamydia cases for Maricopa County have increased 64 percent since the year 2004. The rate for the county as of 2016 was 522 per 100,000 people. Gonorrhea, which was on a steady decline (down to 65 per 100K) up until 2010, is now at a rate of 155 per 100,000 people. 2016 also set an all-time high for syphilis rates in the Surprise area with 33 out of 100,000 people newly diagnosed. While most new STD cases continue to be found in women ages 15-24, Maricopa County has discovered another way in which they’re unique—with many new cases being found in adults over 55 years of age. The community is addressing this concern with some locations offering free testing for senior citizens.

For affordable clinics near your location, one option is NextCare Urgent Care on West Mountain View Boulevard. They offer a range of in-house lab tests, and you can save wait time by checking in online. For hepatitis C testing, walk-ins are welcome over at Minute Clinic on Greenway road. Their hours are limited and afternoons are busy, so plan your visit accordingly. Another option for testing is to go through LabCorp over on Bell road.

To find the best services and location for you, use our search tools below to compare location features across Surprise clinics with our easy-to-read chart.

For women only. Need to register as a patient. The center provides a full range of Avondale ob/gyn and women’s health services for every stage of a woman’s life

Must become a patient in order to receive services

Need to enroll as a patient in order to access services

Social Service Organization. If you are uninsured, you may qualify for a state-funded program or a lower fee scale. Fees for services are based on your household income. Please bring proof of income when you arrive for your visit. You will not be turned away because of your inability to pay

Need to enroll as a patient. Persons without insurance are referred to the health department for HIV, STD, and TB screening

Native Americans with tribal ID or CIB for services are served at both facilities. The inHarmony HIV Circle of Care program targets Native Americans, People of African Descent, all other communities of color and youth for HIV prevention, treatment, behavioral health and social services. The other facility is located at 2423 West Dunlap, Suite 140 Phoenix, AZ; Phone: (602) 279-5351

Not Sure Which Option Is Best For You? Let us point you in the right direction for STD testing in Surprise, AZ

Please use the map to find a public clinic in Surprise, Arizona
GO TO CLINIC LISTINGS ABOVE
0
People, On Average, Visit This Site From Arizona Every Month
0
People from Arizona, On Average, Take Action For Their Sexual Health

Statistics reported is based on publicly available data sources such as CDC for Maricopa County, AZ. Data is normalized to accurately report Maricopa County STD Breakdown.

When people go into any type of medical or health care provider for testing, demographic and details about the type of testing completed along with the results are recorded and shared. Your privacy is strictly protected and your name or other information which could identify you is never shared. Health officials are more interested in general facts such as your area of residence, gender, age, ethnicity and financial background.

The reason for this is that this data can help them to determine which groups of people are the getting certain types of diseases with the most frequency. It is used to pinpoint risk factors and in figuring out who is at the most risk. Local health departments work with the Center for Disease Control by contributing all of this information into a national database. This makes it easier to compare the rates of one city with another and see where the highest concentrations of infection are. The following figures show the number of STD cases for selected types per 100,000 in population in this city. 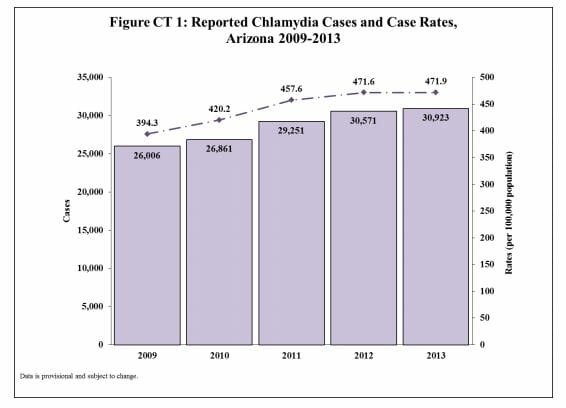 This region differs from national averages for Chlamydia infections. Nationwide, the statistical information shows that women most often have twice the rate of infection as men do for this particular type. In Arizona, the rates are three times higher than those for men, raising significant concern for reaching epidemic proportions.

Gonorrhea rates are also on the rise with males who participate in male to male sex having the highest rates. In addition, studies show that they are more likely to present with multiple additional infections including HIV, Chlamydia and Syphilis. The risk for this group is significant in Maricopa County.

Analysts rely on the information that they receive to assess who is the most at risk based on those who have the highest rates and the consistency over these figures over several years’ figures. This is helpful in developing strategies to provide information that targets them specifically so they will more fully understand their risk and encourage them to get tested.

Although the rates for this region are high, there has been some progress made in curbing the growth rate, particularly for Chlamydia and Gonorrhea. It is slow but shows progress towards slowing the spread. Much more still needs to be done.

Some people resist getting tested because they are embarrassed and do not want to go to their private physicians. They may also fear being seen at a provider that is known to provide these services. STD testing clinics offer private and confidential services for all who visit. They make every effort to maintain the clients anonymity. Free STD testing centers are also available for people who meet the income guidelines for free or reduced cost on services. Even though these resources are available, the numbers of those getting testing are still lower than what is needed. Breaking down the barriers of myth and hesitation is one of the largest challenges that health officials face in tackling the massive issue of STD epidemic.

Getting the information out to the most needy sectors of the population is the only solution to getting a handle on the problem. The bottom line is that people need to be informed about their risks and the solutions that are currently available for them. Mandatory sex ed programs in the public schools are helping to raise awareness. Public sex health education programs which are sponsored by local community organizations and testing providers are also available, but they do not always reach their intended audiences.

If you’ve had sex with multiple partners or with a person who does, you are in a higher risk category. You don’t need to have any symptoms to be infected. In the early stages, many of these diseases do not present themselves with any signs at all. When they do begin to appear, they can cause damage to your reproductive system and even worse. The best thing that you can do is to get tested so you’ll know for certain. Ordering testing is very easy and completing the process takes just a few moments at a local lab. They’ll protect your confidentiality and provide you with fasts and friendly testing services. You’ll get your results shortly so you can breathe a sigh of relief. If you do test positive, you’ll get treatment  so you can move ahead with greater confidence and a better prognosis for your general health. You owe it to yourself to take this precaution.

Other Cities Near Surprise, Arizona