There Are 51 Public Clinics & 60 Private STD Clinics Near You

If you're looking for cheap std testing clinics in the Duncanville area to get a HIV, Herpes, Chlamydia, Gonorrhea, Syphilis or Hepatitis screening for yourself or your partner, you can get tested today by selecting an option below to find an affordable std test clinic near you. Same day std testing locations also available with results in 1-2 days. Learn more here.

COMPARE TESTS AND PRICING
FIND A CLINIC IN Duncanville

What are the STI test options in Duncanville,TX?

Texas state health records show that STD rates, including chlamydia, gonorrhea, and syphilis were up in communities throughout Dallas County. While the majority of newly reported STD cases stem from residents within the city of Dallas, smaller communities, such as Duncanville, TX, are not immune to this growing epidemic.

There are a couple of healthcare facilities in Duncanville, TX that might offer HIV or STD testing, such as Prestonwood Pregnancy Center – Southwest and North Texas Care Clinic. There are also numerous private doctor offices that may provide STD testing. Many of these providers are located near Highway 67 and Wheatland Road (East and West).

You can also choose to drive into Dallas for access to several other clinics that may provide STD and HIV testing, such as Downtown Pregnancy Center, Resource Center Nelson-Tebedo Clinic, Out of the Closet – Dallas, and Parkland Hospital HIV Clinic.

Some of these clinics may advertise free STD testing, but in some cases, not all STD tests are covered under the free service. In addition, some clinics do not offer after test treatment or a consultation with a doctor, which means you will need to go to a second location if you test positive.

Need to register as a patient. Bring to 1st appt: identification, proof of address, proof of insurance(if you have it), proof of income

AIDS Service Organization. People diagnosed with HIV or at-risk for HIV, STI, or other medical concerns

Clinic. Must be HIV+ to receive medical services, case management or psychosocial services. Rapid HIV testing is free and open to public

Not Sure Which Option Is Best For You? Let us point you in the right direction for STD testing in Duncanville, TX

Please use the map to find a public clinic in Duncanville, Texas
GO TO CLINIC LISTINGS ABOVE
0
People, On Average, Visit This Site From Texas Every Month
0
People from Texas, On Average, Take Action For Their Sexual Health

Statistics reported is based on publicly available data sources such as CDC for Dallas County, TX. Data is normalized to accurately report Dallas County STD Breakdown.

The Source is a pregnancy care center that offers extensive medical care and support to women who are pregnant, have had unplanned pregnancies, or recently had children. The health center serves the residents of Dallas, TX, and the surrounding areas, offering basic reproductive health-care, routine well-woman exams, and prenatal care. The medical team is also well-trained in conducting STD tests.

Physicians offer free STD services to every woman who walks into the health center. Therefore, any female resident of Dallas, TX, and its surroundings may visit the health center and receive medical care based on its latest stipulations.

The medical team may confidentially test for STDs and offer treatment referrals when needed. Also, as part of the treatment process, counseling sessions are available.

To efficiently serve clients, the medical team works by appointments. Also, the health center is open for extended hours during the weekend. Moreover, physicians conduct STD tests in a safe environment. 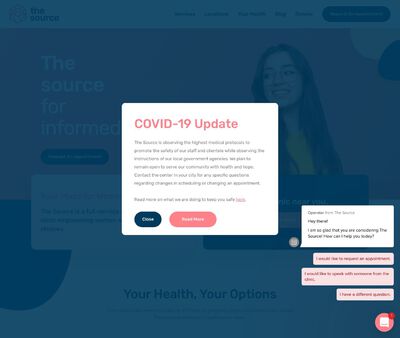 The Community Prevention and Intervention Unit (CPIU) is a component of the Department of Health Care Sciences at UT Southwestern Medical Center. CPIU is tasked with managing and inhibiting the spread of HIV/STIs by providing testing and treatment services. To complement the treatment services, the clinical team offers outreach services to target members of the community who cannot access the health center.

Anyone may receive low-cost STD services regardless of age, sexual orientation, gender, or religious affiliation.

The staff offers comprehensive HIV and/or STI tests depending on the type of tests you need. After knowing your status and you test HIV positive, physicians may link you to care. However, if you’re negative, the medical team may offer preventive care such as antiretroviral medication or condoms.

The clinic has multiple programs that aim to promote healthy living among PLWHA, for instance, CLEAR and Healthy Relationships. Moreover, the medical team actively participates in research to assess the HIV epidemic and promote prevention measures. Also, physicians serve every client with confidentiality. 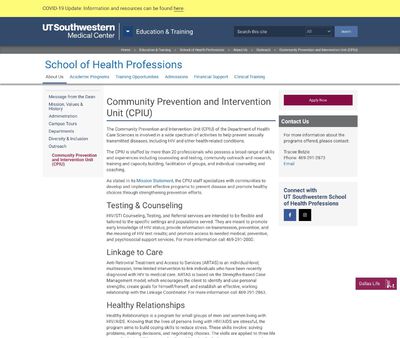 Resource Center traces back to 1983 when it was founded to offer extensive care to the LGBTQ population and PLWHA. The health facility aims to reduce the stigma associated with such communities and curb the spread of HIV. The Nelson Tebedo clinic was established in 1988 to offer HIV services, but it later diversified its services to include those of other STDs.

Anyone may be eligible for free HIV and Syphilis tests in spite of age, sexual orientation, or gender identity. Confidential tests are free, but individuals who require anonymous HIV tests receive low-cost services. Also, people seeking testing for STDs other than HIV and Syphilis may receive a small billing fee.

HIV services are only available by appointment. Additionally, clients may communicate in Spanish with physicians who speak the language. Also, patients may receive free condoms of various brands, styles, and sizes. Moreover, with the Ryan White funds in place, the clinic may provide free and comprehensive care to HIV patients who qualify for the program. 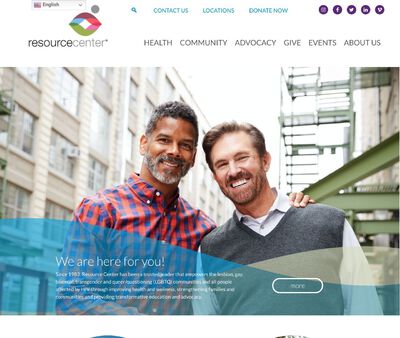 Cedar Hill Health Center of Cedar Hill, TX, is a Planned Parenthood clinic that is operated by the Planned Parenthood of Greater Texas, Inc. The facility avails standard medical care to the people living in Cedar Hill, TX, and its surroundings. Among the medical services available at the clinic includes pregnancy testing, abortion referrals, birth control, and men’s and women’s health care. STD exams are also available, whereby physicians offer HIV tests by blood draw and avail the results in approximately 2 days.

Despite your insurance status, you’ll receive STD services since health-care providers bill some health insurance plans and offer self-payment options for the uninsured. Also, indigent persons may be eligible for the sliding fee scale or state-funded programs.

Clinicians may confidentially test you for single or multiple STDs, and if your results are positive, you may receive medication prescriptions and partner treatment services. Additionally, persons who test positive for HIV or Syphilis may receive treatment referrals. Also, anyone who tests HIV negative may get preventive care options, including PrEP and/or PEP.

Clients have the option of either walking into the clinic or scheduling an appointment for STD services. To enhance discretion, physicians offer confidential or anonymous tests depending on a patient’s preference, and some test results must be picked in-person. Also, the medical team may communicate effectively in English and Spanish, and if you need language interpretation services for other languages, you ought to notify the staff 3 days before your visit. 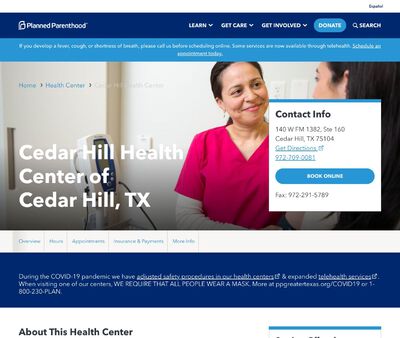 The Dallas County Department of Health and Human Services aims to enhance healthy living and eliminate the spread of diseases among people living in Dallas County. The health center’s staff is well-trained in handling multiple diseases and conditions, including Tuberculosis, Influenza, Rubella, and other communicable diseases. The facility also has an STD clinic whose physicians offer diagnostic and treatment services for multiple STDs, and some STD tests yield same-day results.

After conducting discreet STD tests, the health-care providers may offer medication for treatment if a patient tests positive. Also, persons who may have been potentially exposed to STDs but test negative may receive STD preventive options. 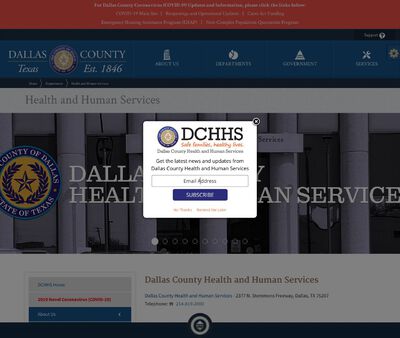 Since 1979, PrimaCare Medical Center has been providing urgent care and occupational medical services to the people residing in Dallas, Fort Worth, and the surrounding Texas areas. Physicians are skilled in pediatric care, conducting x-rays, and treating common illnesses and injuries. The facility has an onsite laboratory whose staff is proficient in food allergy testing and STD evaluation.

When you visit the clinic, you’ll receive discreet STD tests, and if you test positive, a physician may offer medication prescriptions to either manage symptoms or completely cure the disease. Otherwise, if you’re STD negative, you may receive vaccines for some STDs.

The health center is not only open daily but also for extended evening hours. Additionally, residents who speak Spanish may receive health care in the language. Also, patients may conveniently cater to their STD bills via the online pay bill platform. 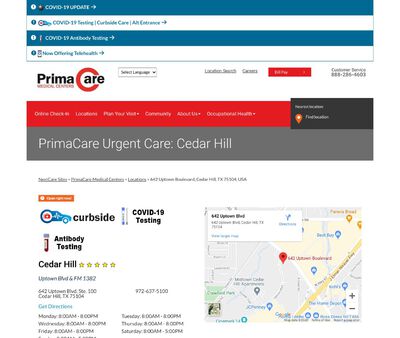 Other Cities Near Duncanville, Texas