There Are 63 Public Clinics & 23 Private STD Clinics Near You

If you're looking for cheap std testing clinics in the Rehoboth area to get a HIV, Herpes, Chlamydia, Gonorrhea, Syphilis or Hepatitis screening for yourself or your partner, you can get tested today by selecting an option below to find an affordable std test clinic near you.
Same day std testing locations also available with results in 1-2 days. Learn more here.

There Are 63 Public Clinics & 23 Private STD Clinics Near You

If you're looking for cheap std testing clinics in the Rehoboth area to get a HIV, Herpes, Chlamydia, Gonorrhea, Syphilis or Hepatitis screening for yourself or your partner, you can get tested today by selecting an option below to find an affordable std test clinic near you.

Questions about STD Testing?
Call at 1-800-666-1250 ( 8AM-5PM MON-FRI )
Call at 1-800-666-1250 ( 8AM-5PM MON-FRI )
COMPARE TESTS AND PRICING FIND A CLINIC IN Rehoboth
DISCLAIMER
Safer STD Testing is an informational referral website. It refers customers to nationally reputed private STD Testing service providers (“Preferred Service Providers” or “Advertisers”). Safer STD Testing is not a medical or healthcare professional facility or a provider of any medical or healthcare services. Safer STD Testing gets compensated on net purchase of products or services by our users referred to such Preferred Service Providers. Click here to read our full disclaimer.

What are the STI test options in Rehoboth,MA?

To prevent HIV transmission and late diagnosis in the county, Bristol County Health Department has programs that make the HIV prevention options, including PrEP and PEP, accessible even to low-income and impoverished populations.

It also supports community outreach programs that create public awareness of HIV to encourage more people to come out and know their status through testing.

Although free STD testing is available in some clinics in the town, you may have to arrive pretty early to avoid long queues. Also, you might not get a prescription immediately in case of a positive diagnosis.

Description: Community Based Organization. Due to COVID-19, drop-in center is available for brief services only. Please check website for updates

Please use the map to find a public clinic in Rehoboth, Massachusetts
GO TO CLINIC LISTINGS ABOVE
STD STATISTICS

Citizens for Citizens Family Planning has provided medical solutions for pregnancy and reproductive health-related concerns since 1972. Healthcare professionals at the clinic collect urine samples for STD evaluations as well as blood draws for HIV testing. Clients may have the preliminary HIV test results within 20 minutes.

Services are accessible irrespective of your insurance or citizenship status. You don’t need parental consent to be a patient, and you may use medical insurance to clear your dues.

You can schedule an appointment to meet with the healthcare providers on staff. If you have an STD, they may offer treatment options. You may also contact the team online for solutions. HPV vaccinations are available at the site.

Clients visiting for HPV vaccination may receive information on the importance of the vaccine and the potential risks of HPV. You’re welcome to walk in at your convenient time to access care. Citizens for Citizens Family Planning keeps a basket of free condoms on-site. 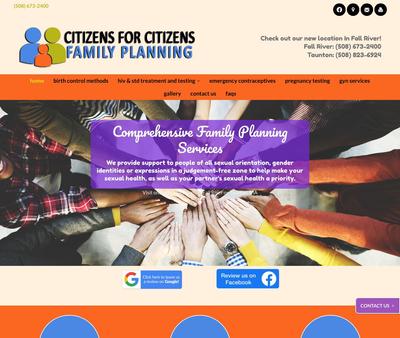 If you receive an HIV-positive diagnosis, you can call or email the medical practitioner on staff for solutions. They may conduct confirmatory screenings and initiate a medication regimen if the second test verifies your infection.

Clients can drop by the center to pick up condoms at no additional cost. They may also call to schedule their consultations conveniently. Interested persons may receive clinical training and education on STDs at the site. CME credit may be available to individuals that complete the training program. 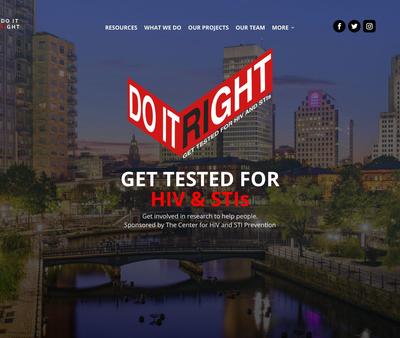 AIDS Project Rhode Island has offered prevention services, education, support, and advocacy to address the needs of individuals at risk for, affected by, or infected with HIV since 1985. Recognized as the first AIDS Service Organization in Rhode Island, the center provides outpatient mental health, non-medical case management, and nutritional services for PLWHA. Clients may also visit for HIV and Hepatitis C testing.

The clinic offers free and confidential HIV and Hepatitis C testing without discrimination based on age, race, gender, or sexual orientation. Delivery services for at-home HIV testing kits and safer sex supplies are only available to eligible Rhode Island residents.

The medical personnel can provide counseling to HIV-negative and positive individuals for prevention or to help them cope with their condition. Case managers are also available on location to link PLWHA to medications, clinical trials, and oral health care.

Street parking may be available at the facility at no additional cost. PLWHA may receive emergency financial assistance if they’re struggling to clear their medical expenses. The personnel may also help them enroll in the AIDS Drugs Assistance Program. 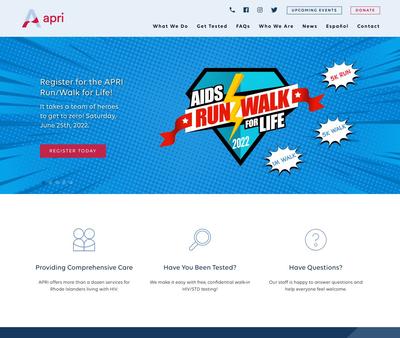 Rhode Island Department of Health offers health programs and services to enhance the well-being of communities throughout Rhode Island. Individuals may visit the clinic for HIV, STD, and Hepatitis C screening. Family planning services, including STD treatment as well as education and counseling on birth control alternatives, are also available.

Teens and adults may receive HIV/STD-related medical services for free or at a low cost. Fees payable for STD testing and treatment are based on patients’ income levels. HIV screening services are accessible to persons aged 13 to 64 getting tested for the first time. Clients may use insurance to pay for HIV testing.

The clinical staff can provide treatment to individuals diagnosed with an STD. It also offers prevention education to help prevent transmission to sexual partners. If you test HIV-positive, the staff may perform a confirmatory screening. 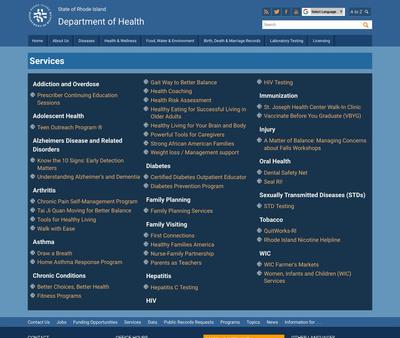