Free STD Testing in the State of Massachusetts

There Are 121 Public Clinics & 50 Private STD Clinics Near You

If you're looking for cheap std testing clinics in the State of Massachusetts to get a HIV, Herpes, Chlamydia, Gonorrhea, Syphilis or Hepatitis screening for yourself or your partner, you can get tested today by selecting an option below to find an affordable std test clinic near you. Same day std testing locations also available with results in 1-2 days. Learn more here.

What are the STI test options in Massachusetts?

Since 1773, when Massachusetts became a leader in resisting British oppression, the state has had great historical importance. Tourism plays a key role in the economy and the recreational areas of Cape Cod, Provincetown, and the Berkshires keep the region thriving. The Bay state is well known for its old money families and New York commuters like Jay Leno, Ben Affleck and James Taylor (who can occasionally be found singing at the White Heart in Springfield). Interesting fact- even if Obamacare is repealed, Massachusetts will still have universal health-care- it’s state law since 2006. Take advantage of this by getting regular STD testing.

Description: Walk-in clinic, no need of referrals. It offers affordable co-pays and other affordable rates for services. Please call for information.

Description: Community Based Organization. Provides services to LGBTQI Community, IDU's and Immigrants and Refugees. Institute does not turn anyone away. Spanish, Portuguese and English language translation available. PrEP enrollment, PrEP Navigation, and support. HIV, STI, Hepatitis C testing free and available to all. Walk-in services available but please call ahead to verify that a tester is available. PrEP is available Tuesday through Thursday

Description: Community Based Organization. Free Walk-in testing clinic: Thursdays from 4pm-6pm, or call to make an appointment for alternate days/times

Description: Social Service Organization. Some charges associated with your services may be covered by your insurance or a state-funded program. If you want to use your insurance, please be sure to bring in your insurance information at the time of your visit. We also provide services for people without insurance. You may be eligible for our sliding scale fee based on income. If you have any questions about billing or eligibility, please call our main number: 1-800-258-4448.

Description: Walk-in clinic, no need of referrals. It offers affordable co-pays and other affordable rates for services. Please call for information.

Not Sure Which Option Is Best For You?
Let us point you in the right direction for STD testing in Massachusetts

Please use the map to find a public clinic in , Massachusetts
GO TO CLINIC LISTINGS ABOVE

STD Statistics for the State of Massachusetts

Statistics reported is based on publicly available data sources such as CDC for , MA. Data is normalized to accurately report STD Breakdown.

Hepatitis A has hit the lowest recorded rates due to very effective vaccination program. Between 2009 and 2013:

The rates of Hep B &amp; C are high in comparison to the national statistics.

Mass. ranked 14th out of 50 states in the number of HIV diagnosis in 2013 with an estimated 992 diagnosed in a year. HIV transmission occurs most frequently in men who have sex with men followed by heterosexual transmission and then transmission through IV drug use. 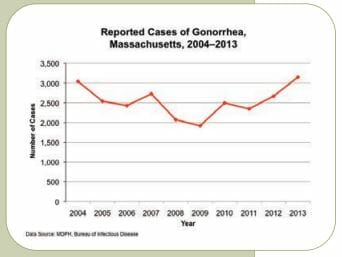 Public schools in the state need to pick a curriculum that adheres to the state standards ensuring that abstinence- only education, which is not an effective way of reducing unintended pregnancies and sexually transmitted diseases, is no longer the only thing being taught. Instead curriculum will also discuss contraception, safe sexual activity, relationship forming skills, and sexual abuse.

Local parents argued the parts of the curriculum did not feel age-appropriate to them, however they have been given the option to have their children opt-out of these classes. Given that STD rates are higher in the younger population it makes sense that this new way of educating our youth should help to decrease these numbers. It is the hopes of educators and health-care professionals that by having sexual health as part of the ongoing curriculum, the open discussion of sex will normalize it, taking stigma out of visiting a clinic for contraception or testing.

This can certainly play a role in keeping people from being tested in small communities like the ones that dot the state. Education is our best weapon in removing the stigma from sexual health-care.

In 2013, 64% of chlamydia cases and 43% of gonorrhea cases were reported in adolescents and young adults (ages 15-24). From 2010 to 2012, HIV infection diagnoses among adolescents and young adults: white (non-Hispanic) (34%) black(non-Hispanic) (33%) Hispanic/Latino (27%), and other (5%). Statistics prove that compared to adults, sexually active adolescents run a higher risk for acquiring sexually transmitted infections because of a combination of behavioral, biological, and cultural factors.

The state has a total population of 6.5 million people.

The average age is 38 years old for men and 40 for women. The sexually-transmitted disease surveillance report  showed higher rates reported of STDs among some racial or ethnic minority groups when compared to their white counterparts. Racial and ethnic markers go hand-in-hand with other determinants of health status such as poverty, unemployment, and low education.

In Massachusetts populations of color represent only 25% and yet to these communities bear a disproportionate number of STDs.

The poverty rates among Boston’s native born (21%) and foreign born (23.3%) and elderly (21%). Health providers know that disease spreads more rapidly in conditions of poverty and local outreach targets those populations as well as other at-risk populations like those with addiction or mental illness. 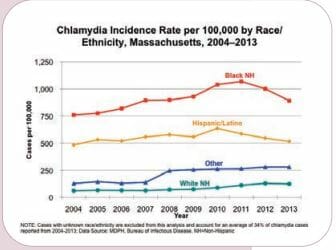 With recent changes to both our health-care system and the way that people here are thinking about educating our youth around sexual health, take charge of your own sexual health.

Ignore the myths that can keep you from getting tested:

Remember, having sex with someone is like sleeping with every partner they have ever had- it’s better to error on the side of caution!