There Are 69 Public Clinics & 47 Private STD Clinics Near You

If you're looking for cheap std testing clinics in the University Park area to get a HIV, Herpes, Chlamydia, Gonorrhea, Syphilis or Hepatitis screening for yourself or your partner, you can get tested today by selecting an option below to find an affordable std test clinic near you. Same day std testing locations also available with results in 1-2 days. Learn more here.

What are the STI test options in University Park,FL?

Infectious syphilis is another problem. In 2008, there were only 256 new diagnoses in the county, and a decade later, it had more than doubled with 546. Congenital syphilis is 100% preventable, but in 2018, 24 newborns tested positive for it.

HIV is a considerable threat. In 2018, 1,224 new infections were reported in Miami-Dade County.

City and county officials are growing concerned about the rising rate of STDs and are urging sexually active individuals to use safe practices and seek out regular testing for STIs.

There are several clinics near University Park that provide STD testing. Many locations include preventive education, treatment, and follow-up care, too.

One option is the Borinquen Medical Centers of Miami-Dade at the West-Dad/Sweetwater Health Center on SW 8th St. in Miami. Off-street parking is available, and the location is accessible by public transportation.

Planned Parenthood provides STI testing for men and women. There’s one located at the Kendall Health Center on SW 117th Ave in Miami. The building is in the rear at the end of the road.

Some centers might offer free STD testing to income-qualified individuals. These sites may have long wait times and comprehensive screenings could come with additional costs.

. Any patient or non-patient can obtain a confidential free HIV test as a walk-in

Community Based Organization. Financial evaluation will determine what amount you have to pay. To assist you in qualifying for health benefit programs, please bring the following information: Photo ID; Proof that you live in Miami-Dade County; Proof of income and family size

Social Service Organization. Free and confidential HIV/AIDS Testing and Counseling for those aged 14 and up

. All HIV and STD screenings are free of charge to the client. Free rapid HIV testing available for uninsured clients also being tested for HIV

Not Sure Which Option Is Best For You? Let us point you in the right direction for STD testing in University Park, FL

Please use the map to find a public clinic in University Park, Florida
GO TO CLINIC LISTINGS ABOVE
0
People, On Average, Visit This Site From Florida Every Month
0
People from Florida, On Average, Take Action For Their Sexual Health

Borinquen Health Care Center is a modern medical facility that was established in 1972 as a grass-roots initiative in the Puerto Rican community with assistance from the Public Health Service in Wynwood. It provides quality dental, behavioral, and sexual health services to communities, and individuals can receive HIV/STD testing and care at the clinic.

HIV testing and treatment is offered on a walk-in basis. You may consult with a doctor over the phone about STD services or book an appointment to receive linkage to care.

Patients are allowed to request for a specific medical care provider. The clinic’s online patient portal enables clients to access their medical records swiftly at any location, and they may also receive prescriptions at a reduced cost from the on-site pharmacy. Additionally, HIV patients are linked to the Ryan White AIDS Drug Assistance programs for comprehensive medical care and case management services. 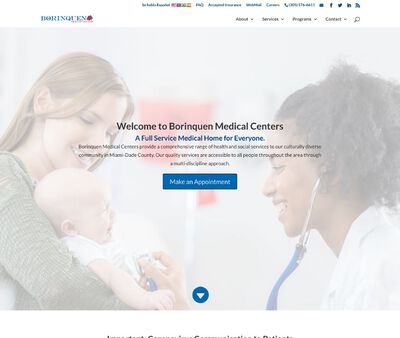 Latinos Salud – Miami Southwest was formed in 2008 to provide Latino homosexuals with a safe space where they can access reproductive health services. The facility offers integrated linkage and screening services across South Florida to reduce infectious diseases and enhance health outcomes.

Upon your visit to the clinic, you may undergo STD/HIV testing and receive your test results on the same day. The center may also provide HIV case management,  life coaching, and group therapy services.

The clinic offers free and confidential HIV testing to sexually active individuals regardless of their insurance status.

To access HIV/STD testing services, you may book an appointment over the phone or walk-in. PrEP/PEP prescriptions are also available for persons who test HIV negative and at a high risk of contracting HIV infections. The clinic’s medical team also links PLWHA to state health departments for comprehensive medical care.

The clinic has social awareness groups where HIV patients can share their experiences to reduce discrimination and stigma and enhance their coping skills. These groups facilitate social activities such as karaoke, game nights, and outdoor events that bring members of the LGBTQ community together. Moreover, low-income PLWHA are linked to the Ryan White program for treatment and care services. 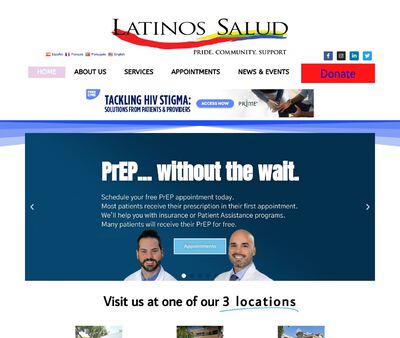 You are required to download and fill out a registration form available on the clinic’s online portal before visiting the clinic for free HIV testing. An affordable fee is charged for STD services payable using insurance plans, and uninsured persons are required to bring their photo identification, proof of residency in Miami-Dade County, income, and family size.

Guidelines on how to refill your prescriptions are readily available online, and you may pay using the patients’ portal. The clinic offers patients and visitors spacious parking lot, and it conducts outreach activities to extend the reach of health care services through case management, primary health screening, and education. 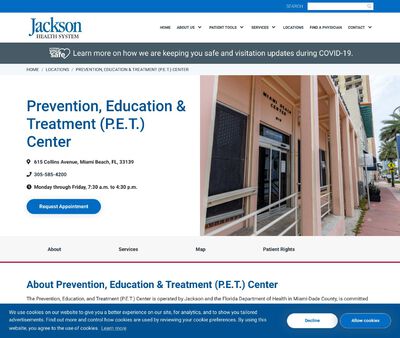 Planned Parenthood-Pembroke Pines Health Center is a full-service medical clinic that avails quality sexual health services in University Park, FL, and surrounding areas. It has certified clinicians who offer HIV/STD testing, counseling, and referrals, as well as STD screenings and treatment, and test results may be available in about 20 to 30 minutes.

You can book an appointment or walk-in for STD/HIV testing and medication. HIV patients are linked to nutritional and mental health counseling services, and condoms or vaccinations are also available at the medical center.

People who are deaf or have hearing loss may access medical services with the help of American Sign Language interpreters available at the clinic. It has health insurance professionals who assist uninsured persons in enrolling in state-funded medical insurance programs. Women may also benefit from the Pills Now Pay Later program, which avails prescriptions on a deferred payment basis. 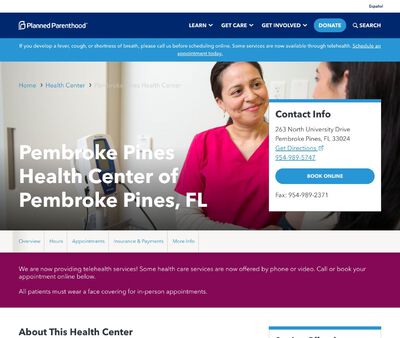 West Dade Family Planning Clinic is a satellite medical clinic of the Florida Department of Health in Miami-Dade County that enhances the well-being of county residents through its health care programs. Clinicians conduct HIV and STD screening and may provide preventative or curative options for the same. The health department oversees environmental health programs, childhood immunizations, and other community wellness initiatives.

Health officials provide low-cost STD/HIV testing to visitors and residents of Miami-Dade County aged 13 years and above. The clinic accepts major insurance plans, and uninsured persons may provide the required documentation for the facility’s management to determine their eligibility for the sliding fee scale program.

Individuals who test positive for STDs may receive antibiotics or referrals for further medical attention on a walk-in basis. Medical practitioners may refer patients to medical centers that provide PrEP/PEP medications.

The health department offers translation services to clients whose primary language is not English. Social workers are available on-site to connect patients with community outreach programs to improve their sexual well being. Moreover, women may benefit from the Medicaid Family Planning Waiver Program, which subsidizes the cost of reproductive health for women. 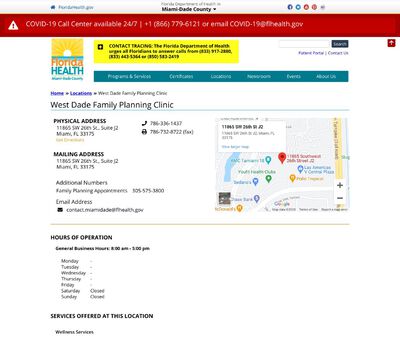 The clinic strives to provide holistic medical services to different communities in the city by providing them with language translators. MD Now Urgent Care has an online patient follow-up system that allows you to check-in online, receive updates on your health condition, access medical history, and pay medical bills. 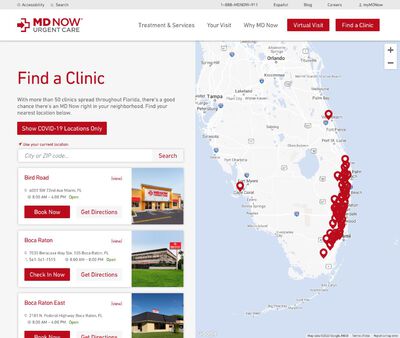 Other Cities Near University Park, Florida