There Are 84 Public Clinics & 57 Private STD Clinics Near You

The Miami Dolphins train in Davie, Florida. Don’t let an STD stop you from kicking butt. Get tested regularly in a clinic near you.

If you're looking for cheap std testing clinics in the Davie area to get a HIV, Herpes, Chlamydia, Gonorrhea, Syphilis or Hepatitis screening for yourself or your partner, you can get tested today by selecting an option below to find an affordable std test clinic near you. Same day std testing locations also available with results in 1-2 days. Learn more here.

COMPARE TESTS AND PRICING
FIND A CLINIC IN Davie

What are the STI test options in Davie,FL?

Health officials are worried about the soaring STD rates in Southeast Florida, especially HIV and syphilis, which often affect the same people. Since modern medicine means that HIV is not the death sentence it used to be, many people have become lax about using protection.

PEP and PrEP inhibit the transmission of HIV, but they don’t block other STDs, and this is often how syphilis is passed along. Syphilis is mostly asymptomatic in the beginning stages, but it can cause irreversible damage to the body if left undetected and untreated.

Pembroke Pines also has a Planned Parenthood. They test for STIs and treat all except HIV, and the fee is on a sliding scale.

Educational Organization/Institution. Need to enroll as a patient

Clinic. Adults only - 18 and over and no pregnant women

Community Based Organization. This location provides PrEP to the uninsured and insured clients and also provides access to PrEP services

Public Health Department/Social Services Department. For the Ryan White HIV/AIDS Part A Program that provides HIV-related health services you must be HIV positive, a Broward County resident, and meet income requirements that vary by service. Photo ID required for testing services. Condoms available for free. Refugee Health services are closed on the first and third Fridays of the month

Service for homeless individuals and family only

Not Sure Which Option Is Best For You? Let us point you in the right direction for STD testing in Davie, FL

Please use the map to find a public clinic in Davie, Florida
GO TO CLINIC LISTINGS ABOVE
0
People, On Average, Visit This Site From Florida Every Month
0
People from Florida, On Average, Take Action For Their Sexual Health

Statistics reported is based on publicly available data sources such as CDC for Broward County, FL. Data is normalized to accurately report Broward County STD Breakdown.

According to 2015 statistics released by the Florida State Health Department and the CDC, the city and Broward County currently have the 2nd highest HIV rate in the state.

Overall there were 10,669 STD incidents reported in the area for 2015 and with a population less than 2 million this translates into a rate of 587 cases per every 100,000 residents. When these statistics are compared to those reported in the last twenty years it is obvious that the rates are rising at an alarming pace.

Since 1998 the number of cases of Chlamydia, Gonorrhea and Syphilis have been steadily rising, and are now well above state averages. The statistics also show that it is not just teens and young adults that are at risk, but older residents are testing positive more often for Syphilis and Gonorrhea.

While women ages 18 to 24 are among those with the highest risk for contracting Chlamydia, young men are twice as likely to test positive for Gonorrhea.

Statistics also show that an increasing number of older men are contracting infectious Syphilis, and that this is not only a problem in the African American community. While African American males do seem to be at a higher risk for contracting a majority of the common STDs, Syphilis is affecting men of all ethnicities.

Here are some of the other statistics released by the CDC and state health department that highlight the importance of regular STD testing. 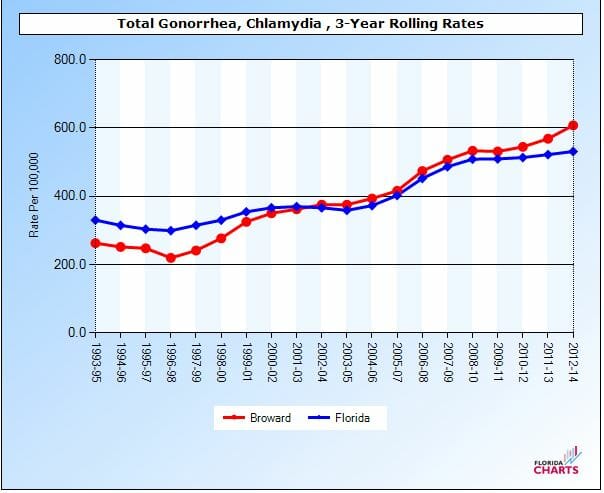 In 2013 there were 1,040 new cases of HIV reported in the city and county, with 146 occurring in residents under the age of 24. This caused local officials to take another look at the sex education programs currently being used in the public schools.

Local lawmakers found that these programs were missing most of the information students need to protect themselves. Not only were the STD rates rising, but also the number of teen pregnancies.

The proposed changes to the sex education curriculum have been met with resistance. Many parents and community leaders still believe that abstinence based programs are the best solution to the rising STD and teen pregnancy rates, but since these numbers are continuing to climb it is obvious that this is no longer working.

Teens are becoming sexually active at a younger age. Since the majority do not understand the risks and responsibilities that come with having sex, it is not surprising to see that more students are testing positive for a STD with increasing frequency.

Included in the new curriculum is information on the importance of regular HIV testing in Davie. This is especially important since more young adults are contracting this potentially deadly disease. Regular Herpes testing in Davie is also vital for students, and it can prevent the spread of this contagious virus through area high schools.

City and county officials point to several reasons why the STD rate is above state averages, and they have already taken a few proactive steps.

The most important are the changes being made to the sex education programs currently being offered in the public schools. Students will now have access to all of the information they need to protect themselves from all STDs.

This not only includes the use of condoms, but the new classes also discuss all of the ways sexually transmitted diseases can be spread. Students learn that it is still possible to contract a STD, even if they are not sexually active. The importance of regular testing is also discussed, along with the fact that the simple procedure is the only way to detect the majority of STDs.

The city’s rural location in the Everglades is also contributing to the problem. While the 30 plus square acres the city is situated on makes for a lush and beautiful environment, it is also making it difficult for some residents to get tested. This has also resulted in not enough STI clinics to treat all of the city’s 91,000 residents.

Strong conservative beliefs are not only impeding the addition of new STD testing centers, but it is also affecting the amount of information teens receive. Until everyone understands how important it is to be tested on a regular basis, the small city of Davie can expect to see its STD rates continue to rise.

Before you head off to explore the surrounding Everglades or tour one of the nearby university campuses it is important to take a few minutes and think about your sexual health. It is understandable if you don’t want to spend the entire day waiting in line at a STI testing clinic, and now you don’t have to. You can schedule confidential STD testing with one simple phone call and only spend a few minutes at a nearby lab. This way you can take care of your sexual health, and still have plenty of time to explore this beautiful area.

Other Cities Near Davie, Florida