There Are 54 Public Clinics & 51 Private STD Clinics Near You

Pompano Beach, Florida, is famous for vacation homes. Don’t let an STD ruin your beach time. Get tested regularly in a clinic near you.

If you're looking for cheap std testing clinics in the Pompano Beach area to get a HIV, Herpes, Chlamydia, Gonorrhea, Syphilis or Hepatitis screening for yourself or your partner, you can get tested today by selecting an option below to find an affordable std test clinic near you. Same day std testing locations also available with results in 1-2 days. Learn more here.

COMPARE TESTS AND PRICING
FIND A CLINIC IN Pompano Beach

What are the STI test options in Pompano Beach,FL?

Located just north of Fort Lauderdale on the Atlantic coast, Pompano Beach shares Southeast Florida’s STD problems to an extent. In 2015, there were 18,867 people living with HIV or AIDS in Broward County, with a prevalence rate of 1,180 per 100K people, well above Florida’s rate of 615.

But health officials worry that there are still a lot of people out there who don’t know they are infected. There is still a stigma surrounding HIV, especially directed toward gay and bisexual men, and this can make people reluctant to come in for testing.

In 2017, 11,289 people in Broward County were diagnosed with chlamydia, at a rate of 599 per 100K people, above Florida’s rate of 486.8. The gonorrhea and infectious syphilis rates were 209.1 and 17.5. The availability of PrEP and PEP may have caused some people to become lax about using protection, and this is partly responsible for the resurgence of syphilis.

Pompano Beach has a few STD-testing clinics, and of course there are more options in the surrounding areas, such as an organization focused on the Latinx community that provides free STD testing for HIV only. Premier Urgent Medical Care Center, on Sample Rd, offers STD testing, as does MD Now Urgent Care on Federal Hwy.

AIDS Service Organization. All are eligible for PrEP with or without insurance

Not Sure Which Option Is Best For You? Let us point you in the right direction for STD testing in Pompano Beach, FL

Statistics reported is based on publicly available data sources such as CDC for Broward County, FL. Data is normalized to accurately report Broward County STD Breakdown.

The area currently has high rates for Chlamydia and Gonorrhea infections, according to 2015 statistics. Students that test positive for Herpes is also on the rise, and this virus is also starting to show up in older residents. Hepatitis B and C diagnoses are slowing down, and much of this is being attributed improved treatments and increased public awareness. The same was also true for HIV/AIDS, but in recent years the state health department has noted a sudden increase in positive diagnoses. 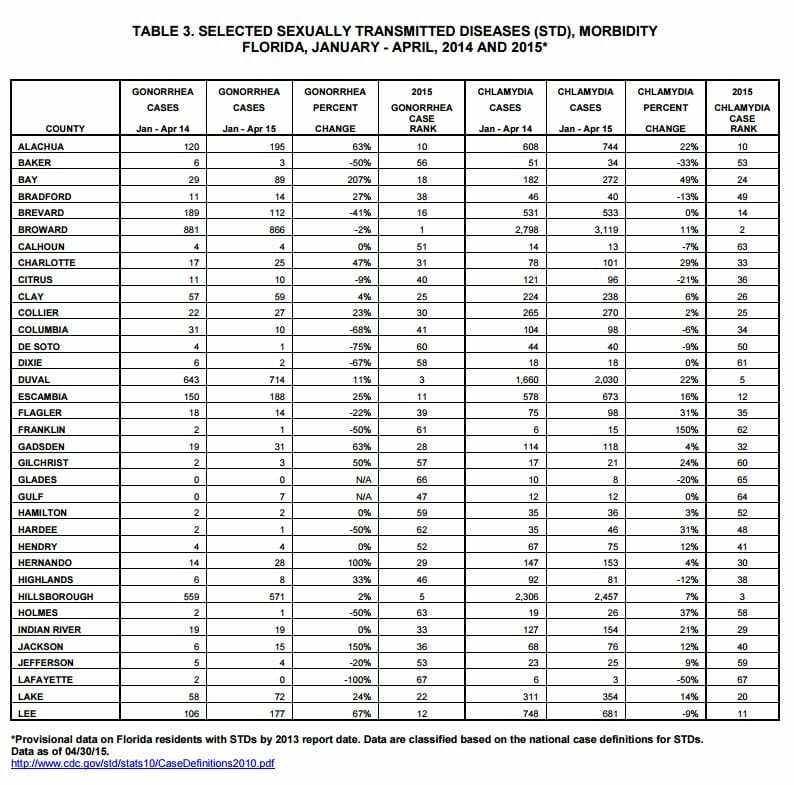 In 2013 Broward County decided to implement its own program, after the state released statistics indicating the area had one of the highest rates of HIV/AIDs in the nation. While the primary cause for the dramatic shift in school officials’ feelings toward sex education classes was the high HIV rates, the increasing number of teen pregnancies also played a role in this controversial decision.

Educators finally realized that promoting abstinence was not effective an effective approach, and officials know that something needed to be done. The new classes have meet resistance, from teachers and parents. While all public schools in the county are required to offer the program, parents can choose to “opt” their child out and discuss the necessary information at home.

In the past couple of years since the county and Pompano Beach have introduced the new program to the classroom the number of some sexually transmitted diseases among teens has been decreasing. More students understand the importance of regular Herpes testing in Pompano Beach, and the rate of infection is starting to decline. Unfortunately not enough students and residents are taking advantage of regular HIV testing in Pompano Beach which is why it still has one of the highest incident rates in the nation.

Many of the visitors to the area do not get tested regularly for a STD, and it is not uncommon for them not to realize that they be already be infected. Since not all of the STDs are transmitted solely through sex, residents can easily find themselves at risk.

Along with the high number of tourists, many residents simply do not understand the risk sexually transmitted diseases can have to their health. Until recently it was difficult for residents to find any information on STDs, and most were simply taught that they only way to protect themselves was to abstain from having sex. With teen pregnancy rates reaching all-time highs in 2012, it became obvious that this approach was not working.

While students and residents can now easily get the information they need to start protecting their sexual health, it is still difficult for many of them to be tested. Cuts to health care programs have left many residents unable to pay for testing, and this also forced many neighborhood clinics to close leaving people with no place to go.

Even though almost anyone would rather spend the day on the beach than in a cramped clinic waiting room, getting tested regularly for STDs is the best way to take care of your health. If you are concerned about possible STDs but don’t want to spend a long day waiting in one of the city’s clinics, there is another option you can take advantage of. Simply by stopping in a STI clinic you can do your part for yourself and community.

Other Cities Near Pompano Beach, Florida