There Are 137 Public Clinics & 68 Private STD Clinics Near You

If you're looking for cheap std testing clinics in the Friendly area to get a HIV, Herpes, Chlamydia, Gonorrhea, Syphilis or Hepatitis screening for yourself or your partner, you can get tested today by selecting an option below to find an affordable std test clinic near you.
Same day std testing locations also available with results in 1-2 days. Learn more here.

There Are 137 Public Clinics & 68 Private STD Clinics Near You

If you're looking for cheap std testing clinics in the Friendly area to get a HIV, Herpes, Chlamydia, Gonorrhea, Syphilis or Hepatitis screening for yourself or your partner, you can get tested today by selecting an option below to find an affordable std test clinic near you.

Questions about STD Testing?
Call at 1-800-666-1250 ( 8AM-5PM MON-FRI )
Call at 1-800-666-1250 ( 8AM-5PM MON-FRI )
COMPARE TESTS AND PRICING FIND A CLINIC IN Friendly
DISCLAIMER
Safer STD Testing is an informational referral website. It refers customers to nationally reputed private STD Testing service providers (“Preferred Service Providers” or “Advertisers”). Safer STD Testing is not a medical or healthcare professional facility or a provider of any medical or healthcare services. Safer STD Testing gets compensated on net purchase of products or services by our users referred to such Preferred Service Providers. Click here to read our full disclaimer.

What are the STI test options in Friendly,MD?

Friendly, MD, is a census-designated place with an estimated population of 9,937 as of the 2020 census. But HIV is still a serious issue facing individuals living in the CDP.

Containing Chlamydia in the county seems to have been no easy feat for the health officials. In 2019, the number of persons diagnosed with Chlamydia was 8,262, higher than in 2015, which was 6,153.

To reduce HIV/STD infections and their effects, Prince George's County Health Department coordinates with other local agencies such as AHF centers and non-profit organizations to provide accessible and affordable HIV/STD care to residents. Also, the outreach staff educates the diverse populations in the county on condom use and safer sex habits.

Although most clinics in Friendly, MD, offer low-cost or free STD testing, you may experience long wait times. Similarly, those charging clients for a doctor's consultation may not have multiple payment options.

Description: Free HIV testing offered to the general public age 16 and above.

Description: Please register as a patient and bring proof of income.

Description: Social Service Organization. If you are uninsured, you may qualify for a state-funded program or a lower fee scale. P.

Description: HIV/STD testing is open to the general public. STD testing, at this location, using Self-Test Kit's is meant for patients who are not experiencing symptoms. Patients experiencing symptoms should visit the Gay Men's Health and Wellness Clinic on Tuesday and Thursday evenings. Call 202-797-4443 for more information. No appointments available from 12:30-1:30pm Monday-Thursday and from 12:30-2:15pm on Fridays. For HIV testing hours please visit: https://www.whitman-walker.org/testing

Please use the map to find a public clinic in Friendly, Maryland
GO TO CLINIC LISTINGS ABOVE
STD STATISTICS

AHF Wellness Center - Temple Hills offers medicine and advocacy regardless of the client's ability to pay. For HIV/STD screening, a certified counselor may perform a physical examination or take blood, urine, or throat swab samples. The testing appointment lasts around 30 minutes. However, you may have to wait longer if the facility is crowded.

Regardless of your insurance status, you are eligible for free STD testing on location. No appointments are necessary since services are offered on a walk-in basis.

Those diagnosed with HIV are linked to HIV specialists, while individuals infected with STDs are treated on-site. You can consult the staff if you have questions regarding PrEP, PEP, colposcopy, or other STD concerns.

The center has a fully equipped mobile clinic that provides free HIV/STD testing and education in the local community. On request, it also gives out free condoms to clients. If you want to access your laboratory results, you can contact the staff or check them on your AHF patient portal. 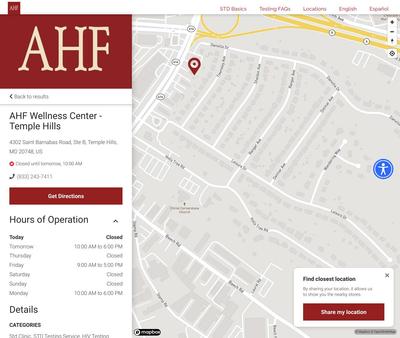 STD Clinic of Alexandria provides quality and affordable sexual health services to Friendly, MD residents. You can ask a doctor for HIV/STD diagnostics if you're unsure of your STD status. Although the testing appointment may take 15 minutes, STD results are obtainable within 48 hours.

You can contact the staff via email or phone to set your preferred date and time for HIV/STD testing. Medical consultation is provided at no charge to you.

Medical practitioners on-site help clients with abnormal STD results understand their diagnosis. They may also offer therapies to deal with the infections. If you’ve been recently exposed to HIV, the medics may educate you on prevention options such as PEP and help you on how to obtain them.

The clinic administers STD vaccines such as Twinrix and HPV shots. You may also access travel vaccines such as Tdap, yellow fever, and typhoid shots on location. Clients can receive STD materials at the facility at no cost.

NovaSalud Inc. improves the local community's health through engagement and outreach programs. It applies evidence-based interventions to reduce the negative consequences of substance use, HIV, and STDs. If you receive rapid Hepatitis and HIV tests, you may obtain results within 15 minutes. For Chlamydia and Gonorrhea screens, the results are accessible within five business days.

The health facility offers free HIV/STD testing services to all persons, whether insured or not. You may walk in or make appointments before your visitation.

Besides counseling patients during HIV appointments, doctors facilitate linkage to care and issue referrals to support services if needed. Medical facilitators may also refer you if you require PrEP and PEP therapies or Hepatitis A and B shots. 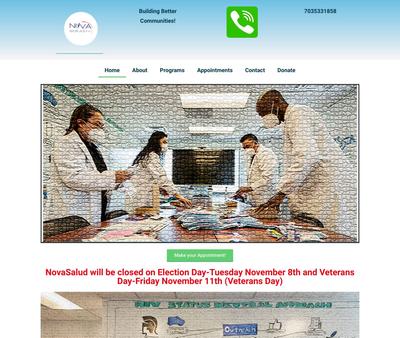 Prince George's County Health Department strives to deliver comprehensive HIV medical care to uninsured and underinsured persons living with HIV in Friendly, MD, and its environs. Whether you have HIV/STD symptoms or not, medical professionals conduct a physical exam and laboratory tests to determine your health status. They also address your concerns and respond to questions you might ask during the visit.

HIV testing at the health department is free. You should schedule an appointment with the clinic. Public members aged 12 and up can receive reproductive health services on location. Insurance payment is acceptable, but copays apply for services not covered under your specific plan.

To prevent you from developing STD complications, the health providers formulate treatment solutions immediately after receiving your laboratory reports. They may also notify your partners anonymously to lower the risk of reinfection. PLWHA can access case management services at the health center.

Medical personnel at the clinic conduct Directly Observed Therapy (DOT) for TB patients to ensure they adhere to their medications. The facility offers individual/group counseling and psychiatric services to PLWHA. Adolescents and youth can join the Healthy Teens and Young Adults program on-site to learn about responsible decision-making. 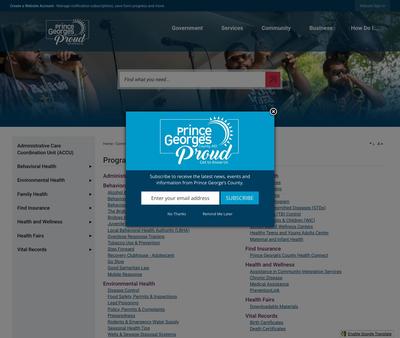