There Are 90 Public Clinics & 22 Private STD Clinics Near You

If you're looking for cheap std testing clinics in the Parole area to get a HIV, Herpes, Chlamydia, Gonorrhea, Syphilis or Hepatitis screening for yourself or your partner, you can get tested today by selecting an option below to find an affordable std test clinic near you.
Same day std testing locations also available with results in 1-2 days. Learn more here.

There Are 90 Public Clinics & 22 Private STD Clinics Near You

If you're looking for cheap std testing clinics in the Parole area to get a HIV, Herpes, Chlamydia, Gonorrhea, Syphilis or Hepatitis screening for yourself or your partner, you can get tested today by selecting an option below to find an affordable std test clinic near you.

Questions about STD Testing?
Call at 1-800-666-1250 ( 8AM-5PM MON-FRI )
Call at 1-800-666-1250 ( 8AM-5PM MON-FRI )
COMPARE TESTS AND PRICING FIND A CLINIC IN Parole
DISCLAIMER
Safer STD Testing is an informational referral website. It refers customers to nationally reputed private STD Testing service providers (“Preferred Service Providers” or “Advertisers”). Safer STD Testing is not a medical or healthcare professional facility or a provider of any medical or healthcare services. Safer STD Testing gets compensated on net purchase of products or services by our users referred to such Preferred Service Providers. Click here to read our full disclaimer.

What are the STI test options in Parole,MD?

Parole, MD, is a suburb of Annapolis and a census-designated place in Anne Arundel County. Between 2013 and 2015, the county’s public health officials reported a fluctuating number of new HIV infections. In 2013, they reported 50 new cases while in 2014 and 2015, they recorded 59 and 52 new infections, respectively.

The Anne Arundel County Department of Health has shown a lot of dedication to reducing HIV/STDs' prevalence through prevention programs that involve the distribution of safe sex kits that contain information on HIV/STD facts and testing centers, a condom pal case, and male and female condoms and dental dams.

Some of the clinics have free STD testing options. However, their opening hours and availability may not be consistent, and you may need an appointment to receive the service.

Description: Women only. Free HIV and STD testing offered. Herpes testing (only if there are active lesions). By appointment only

Description: Insurance or fee for service. Self-pay rates are discounted rates, with discounts ranging from 25-50%, depending upon the item. The Self-pay option requires payment in full on the date of service.

Description: Women. Free HIV and STD testing offered. Herpes testing only if there are active lesions.
•Chlamydia. By Appointment Only

Please use the map to find a public clinic in Parole, Maryland
GO TO CLINIC LISTINGS ABOVE
STD STATISTICS

The pregnancy center offers free and confidential testing for common STDs to all patients visiting the clinic.

Individuals diagnosed with an STD will be prescribed medication or referred for specialty treatment options. Women seeking abortion services are required to be tested for STDs to avoid complications, such as PID, following the procedure.

This pregnancy clinic has male counselors who guide men affected by unplanned pregnancies on the available options. Its LifeSenseprogram supports first-time parents and those with kids throughout their pregnancy and parenting journey.

Other benefits of the program include classes such as jobs, healthy relationships, resumés, and pregnancy. Adoption information is also available. 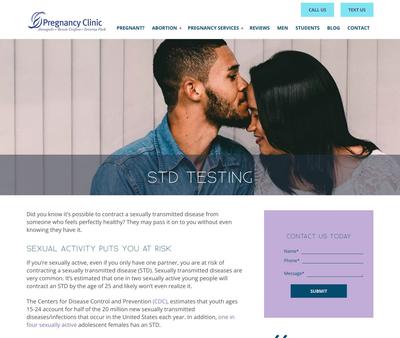 AHF Wellness Center - Washington DC helps residents in Parole, MD, and beyond to take control of their health by providing HIV and STD testing services.
Utilizing modern techniques, clients are assured of a fast, friendly, and confidential STD/HIV testing process. Testing at this clinic takes about 30 minutes, although waiting times vary, and during busier days of the week, you may wait for a little longer.

Patients seeking STD/HIV testing are not required to make any payments or provide their insurance information because the services are offered free of charge.

Clients can receive STD testing services conveniently because the testing counselors allow walk-ins. During the testing process, the counselor will walk you through the process, talk about your sexual history, conduct a physical exam, and test for STDs. Plenty of treatment options are available if you get abnormal STD test results. Patients exposed to and those at risk of contracting HIV can request PEP or PrEP, respectively.

Free condoms and mobile testing services are also available at AHF Wellness Center - Washington DC on request. The clinic has a pharmacy offering convenient medication to patients on-site. Plus, case management services are available for PLWHA. 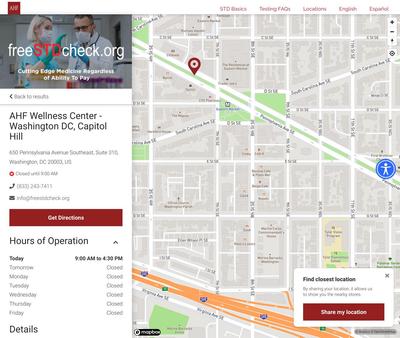 Individuals who take the rapid HIV test will receive their results within 20 minutes while STI test results may take five to eight business days and can be accessed via the patient portal or by phone.

Based on your exposure or symptoms, you can receive free HIV screening as well as STI testing, evaluation, and treatment. Patients are not required to provide their insurance information to receive rapid HIV testing services but are encouraged to make donations to facilitate the free services. Uninsured clients can receive PrEP coverage navigation.

Clients can book an appointment to receive testing together. If you’ve been exposed to HIV within the past 72 hours, you can receive PEP at a fee. PrEP is also available for individuals at high risk of contracting HIV. They also offer preventive care services for individuals not infected with HIV/STI as well as HIV care and case management services to PLWHA.

The center provides youth mental health services, such as individual and group therapy, for young adults ages 13 to 24 years, focusing on LGBTQ identities, trauma recovery, and other life challenges. 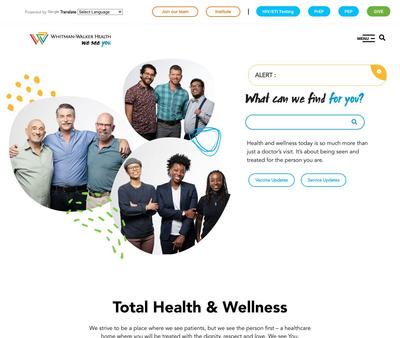 The Montgomery County Government through the Dennis Avenue Health Center provides health services that are tailored to promote the well-being of its residents.

To receive free STD testing and treatment, you must be a Montgomery County resident; therefore, you will be required to provide your picture ID as well as proof of your current Montgomery County address, such as Maryland ID, passport, or official mail. However, zero-cost, anonymous, and confidential HIV testing, as well as pre and post-test counseling, is open to all public members regardless of their residency.

Individuals diagnosed with HIV and PLWHA will receive assistance in applying for programs, including Maryland AIDS Drug Assistance Program, which provides HIV medication. Other services available for PLWHA include outpatient HIV-related medical care, dental and nutrition services, and medical case management as well as entitlements and transportation assistance. 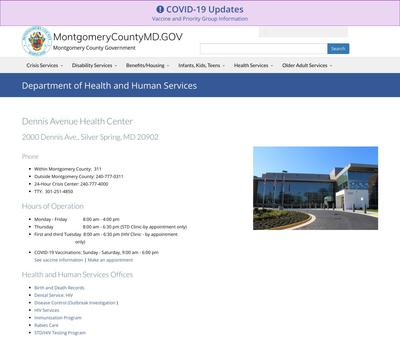