Free STD Testing in the State of Georgia

There Are 108 Public Clinics & 19 Private STD Clinics Near You

If you're looking for cheap std testing clinics in the state of Georgia to get a HIV, Herpes, Chlamydia, Gonorrhea, Syphilis or Hepatitis screening for yourself or your partner, you can get tested today by selecting an option below to find an affordable std test clinic near you. Same day std testing locations also available with results in 1-2 days. Learn more here.

What are the STI test options in Georgia?

In between visiting the Coca Cola Factory and exploring the Savannah coast, it is important to remember to visit your local STD clinic regularly for testing, especially since Georgia has some of the highest rates of Syphilis, Gonorrhea, and Chlamydia in the country. There are numerous free STD testing centers available in the peach state, and with a single phone call, you can avoid the lack of privacy and long wait. Schedule private STD testing and only wait 15-20 minutes at the lab, which leaves you plenty of time to find out Coca Cola’s secret formula.

Public Health Department/Social Services Department. HIV testing is $25.00. However there is no fee if patient falls below federal poverty level

Public Health Department/Social Services Department. There is a fee for STD/HIV and HIV only testing. No fees if patient is below federal poverty level. Free condoms available upon request

Public Health Department/Social Services Department. No services denied because of inability to pay

Not Sure Which Option Is Best For You? Let us point you in the right direction for STD testing in , GA

STD Statistics for the State of Georgia

Statistics reported is based on publicly available data sources such as CDC for GA. Data is normalized to accurately report Georgia STD Breakdown. Demographic breakdowns are based on STD reporting available at the state level.

According to a 2013 CDC (Centers for Disease Control and Prevention) report, the state ranked in the top ten for the highest STD rates in the country: fourth for syphilis, eighth for Chlamydia, and seventh for Gonorrhea. Twenty years prior, these rates were significantly lower. While its rates of Chlamydia and other STIs did have a short lapse from 2011-2013, they are again on the rise, primarily due to lack of funding for safe sex programs.

Some additional statistics are:

As is the case with many states, Georgia’s youth seem to be the major contributors to its high sexually transmitted disease rates. In 2009-2013, those aged 15-24 had the highest rates of chlamydia, while those aged 25 and above maintained relatively low levels. It is no wonder, then, that the state’s public health officials are working to instill the important of safe sex and regular testing into the state’s youth, but with limited funding for sex education programs, this is a difficult task. 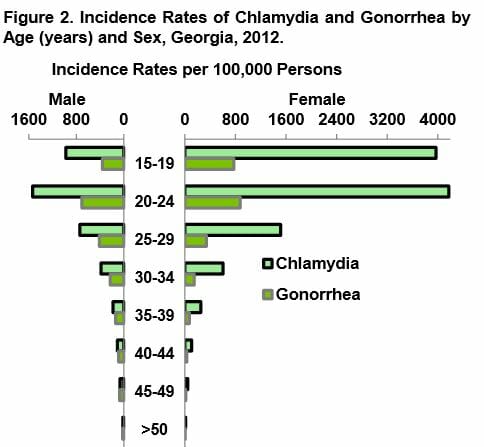 While the state’s public health officials have taken steps toward lowering the rates of HIV and other STDs, experts are concerned that the state’s sex education courses are not properly funded and neglect teaching crucial topics. According to a report by the CDC, more than two-thirds of all Georgia schools failed to teach all of the recommended sexual education topics, with educating about condom usage being particularly low.

Georgia law requires that sexual programs, including those for HIV, emphasize abstinence until marriage, but does not require that students learn comprehensive knowledge and skills for avoiding contraction of sexually transmitted diseases. Statistics show that although abstinence is one of the healthier options, abstinence-only curricula prove inefficient, and may actually cause sexually active adolescents to avoid the use of contraceptives. Therefore, despite a consistent need for sexual education, students across the state receive anything but.

As a result, the majority of the populace has taken a lax approach to practicing safe sex and being tested for STDs. This has proven extremely detrimental to the state’s overall sexual health, with its youth being the major victims. With the state’s HIV and herpes rates slowly rising, this comes at a time when it is even more crucial for sexually active people to get HIV testing and Herpes testing. Fortunately, parents and major professional health organizations such as the American Public Health Association are in support of not only teaching abstinence but also teaching comprehensive sex education in schools.

There seem to be quite a few areas in the state  that are especially prone to high STD rates. These include Columbus (ranked 40th nationally), the metro-Atlanta area (accounted for more than 60% of HIV cases in the state), and the health districts of Savannah, Augusta, Columbus, and Macon (accounted for nearly 20% collectively). STD clinics are progressively developing in these areas and increasing their methods of sexually transmitted infections prevention.

Also shown in STD statistics for this state was that one of its most diverse communities, gay/bisexual men, had the highest risk for contraction of HIV and other STDs. An estimated 55-61% of all new HIV/AIDS cases reported were in the category of men who have sex with men (MSM). Even though all men are at risk for developing STDs, the MSM community is at a significantly higher risk of contracting HIV and other sexually transmitted infections.

Gender also plays a major role. From years 2009-2013, the rates of chlamydia among females were significantly higher than the rates among men, whereas men had higher rates of syphilis. This is not to say that one gender is at a lower risk of contracting specific STDs than the other. The discrepancy in rates is partly accredited to embarrassment and social stereotypes. 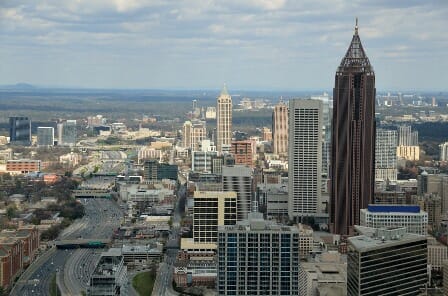 The prosperous peach state has something for everyone: beautiful scenery, popular attractions – and high rates of chlamydia, HIV, gonorrhea, and syphilis. Georgia is a beautiful, flourishing state, but a lack of education about sexual health has left it with a huge STD crisis. Fortunately, both public and private STD clinics have advanced and offer more options than ever before when it comes to testing, support, and advice.

While it has its ways of handling the challenges of educating the population about sexual health through outreach programs, sex education, and STD clinics, private citizens may benefit by doing their own research about STDs and what they can do to prevent infection. Parents should also discuss these topics with their children and instill a sense of important when it comes to protected sex.

In today’s day and age, it is more crucial than ever to receive STD testing, but the possibility of being seen and the long lines deters many citizens from doing so. To avoid these problems you can make a simple call and schedule confidential STD testing. The testing process only takes 20 minutes, which will leave you plenty time to explore Downtown Atlanta.