There Are 19 Public Clinics & 14 Private STD Clinics Near You

If you're looking for cheap std testing clinics in the Lake Tahoe area to get a HIV, Herpes, Chlamydia, Gonorrhea, Syphilis or Hepatitis screening for yourself or your partner, you can get tested today by selecting an option below to find an affordable std test clinic near you.
Same day std testing locations also available with results in 1-2 days. Learn more here.

There Are 19 Public Clinics & 14 Private STD Clinics Near You

If you're looking for cheap std testing clinics in the Lake Tahoe area to get a HIV, Herpes, Chlamydia, Gonorrhea, Syphilis or Hepatitis screening for yourself or your partner, you can get tested today by selecting an option below to find an affordable std test clinic near you.

Questions about STD Testing?
Call at 1-800-666-1250 ( 8AM-5PM MON-FRI )
Call at 1-800-666-1250 ( 8AM-5PM MON-FRI )
COMPARE TESTS AND PRICING FIND A CLINIC IN Lake Tahoe
DISCLAIMER
Safer STD Testing is an informational referral website. It refers customers to nationally reputed private STD Testing service providers (“Preferred Service Providers” or “Advertisers”). Safer STD Testing is not a medical or healthcare professional facility or a provider of any medical or healthcare services. Safer STD Testing gets compensated on net purchase of products or services by our users referred to such Preferred Service Providers. Click here to read our full disclaimer.

What are the STI test options in Lake Tahoe,CA?

A spike was also noted in the number and rate of new Gonorrhea infections in the county between 2016 and 2017. The former year of reference had 6,582 diagnoses prevailing at a rate of 122.8, whereas in the following year, 7,424 new infections were occurring at 138.1.

El Dorado County’s public health administrators have identified Chlamydia and Gonorrhea as key areas to focus on with their HIV/STD prevention program. To reduce the STD/HIV prevalence within the communities, they focus their prevention efforts on high-risk individuals such as MSM, HIV positive persons, commercial sex workers, illicit drug users, and sexually active young adults.

Free STD testing is only available to you if you qualify under various predetermined guidelines. Additionally, you may have to seek medication elsewhere since some may lack an onsite pharmacy.

Description: Social Service Organization. If you are uninsured, you may qualify for a state-funded program or a lower fee scale. Fees for services are based on household income. Walk-in patients accepted, on a first come, first serve basis. Scheduling appointments is recommended to ensure you will be seen for the service you need

Description: Public Health Department/Social Services Department. Free condoms available. The Community Health Nurse is at this location on the 1st and 3rd Tuesday of every month. Call for information. Please contact the organization for hours of operation

The services available at the health facility are free of charge, thus no need for insurance. Men and women can access the facility regardless of their income, age, nationality, or disabilities.

The healthcare providers at the health center offer kind and compassionate STD education encouraging people to get early diagnosis for on-time treatment for diagnosed STIs to prevent long-term health issues. They also advise people to have immediate STD testing if their partners test positive for Chlamydia, Gonorrhea, and Syphilis. The health center also educates on preventative measures such as abstinence and proper use of condoms. 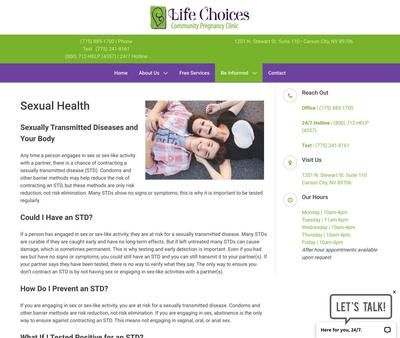 Barton Women's Health is a subsidiary of the Barton Health network of care serving patients in Lake Tahoe and the nearby communities. The health center provides a wide range of quality services that include gynecological, infertility, and obstetrical care. Its health care providers also offer warm and professional prenatal, delivery, and STD testing services.

The health facility’s staff accepts insurance and online payments through a secure online payment portal. The medical clinic has a Helping Hands Program that offers financial assistance to people unable to pay their hospital bills, with or without insurance. Its employees can also help patients to set up an effective payment plan.

The board-certified physicians at the health center provide STD diagnosis for treatment for people that test positive. The care team also offers HPV screening and services to prevent further health complications such as cancer.

Barton Women's Health offers virtual visits or telehealth via zoom health or phone for patients that cannot make it to the healthcare center in person because of distance, infectious diseases and other circumstances.

Free aids and language services are also available for patients with communication disabilities and those with English as their second language. 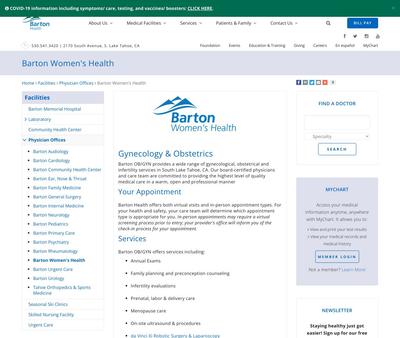 Carson City Health and Human Services works towards promoting the health of its residents and the surrounding communities by implementing health intervention strategies.

Its staff provides quality health care and referral services to meet the patients’ medical needs. Some of the programs and services available at the health facility include epidemiology, environmental health, and clinical services such as HIV/STD testing.

The employees at the health department do not turn away patients due to their inability to pay. They accept most insurance providers to cover for medical bills.

The clinicians provide treatment services for patients diagnosed with STDs and STD/HIV health information. They also offer confidential safe-sex kits, partner notification services, and non-judgmental place for sexual health inquiries and answers, and support. The care providers also educate on the effective prevention strategies that include abstinence, HPV and Hepatitis B vaccines, mutual monogamy, use of condoms, and reducing the number of sexual partners.

Carson City Health and Human Services has a patient portal that helps patients to securely track and access healthcare services. It also keeps patients’ confidential details safe and cannot share the information without their written authorization. 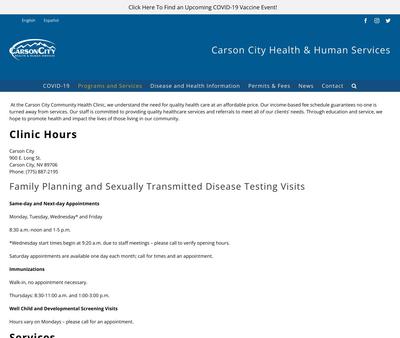 New patients visiting the health facility should complete forms such as past history, patient record of disclosures, and demographic forms prior to their first visit. The urgent care center offers financial assistance based on household income. Its financial counselors might assist qualifying patients to set up a payment plan.

The care providers at the medical clinic treat patients diagnosed with Chlamydia, Syphilis, or Gonorrhea. 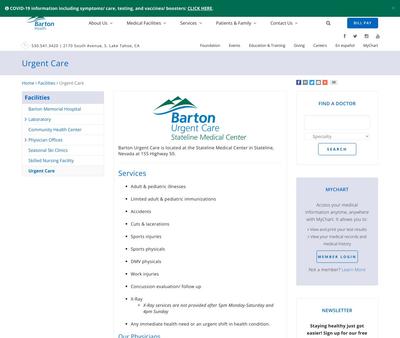