There Are 24 Public Clinics & 29 Private STD Clinics Near You

If you're looking for cheap std testing clinics in the Ridge area to get a HIV, Herpes, Chlamydia, Gonorrhea, Syphilis or Hepatitis screening for yourself or your partner, you can get tested today by selecting an option below to find an affordable std test clinic near you.
Same day std testing locations also available with results in 1-2 days. Learn more here.

There Are 24 Public Clinics & 29 Private STD Clinics Near You

If you're looking for cheap std testing clinics in the Ridge area to get a HIV, Herpes, Chlamydia, Gonorrhea, Syphilis or Hepatitis screening for yourself or your partner, you can get tested today by selecting an option below to find an affordable std test clinic near you.

Questions about STD Testing?
Call at 1-800-666-1250 ( 8AM-5PM MON-FRI )
Call at 1-800-666-1250 ( 8AM-5PM MON-FRI )
COMPARE TESTS AND PRICING FIND A CLINIC IN Ridge
DISCLAIMER
Safer STD Testing is an informational referral website. It refers customers to nationally reputed private STD Testing service providers (“Preferred Service Providers” or “Advertisers”). Safer STD Testing is not a medical or healthcare professional facility or a provider of any medical or healthcare services. Safer STD Testing gets compensated on net purchase of products or services by our users referred to such Preferred Service Providers. Click here to read our full disclaimer.

What are the STI test options in Ridge,NY?

To curb further STD transmissions, the Suffolk County Health Department works with the community health centers to distribute free condoms to sexually active people. They also educate residents on the dangers of sharing injections, having multiple sexual partners, and having unprotected sexual behaviors as a measure to reduce the rate of STDs/HIV infections.

In case you are interested in checking your STD/HIV health condition, you can walk-in to the healthcare clinics in Ridge, NY, for free STD testing, but the results might not be immediate. For tests that require payments, the costs will be dependent on income and welfare eligibility.

Description: HIV and Hepatitis C Testing is available by appointment across Suffolk County. Please contact the organization for hours of operation

Description: Social Service Organization. If you are uninsured, you may qualify for a state-funded program or a lower fee scale. This center is open two Saturdays each month. Hours may be subject to change. Please call ahead to confirm hours

Description: Most insurances, reasonable self pay rates. Must request appointment with PA Jeremiah

Please use the map to find a public clinic in Ridge, New York
GO TO CLINIC LISTINGS ABOVE
STD STATISTICS

South Shore Infectious Diseases P.C. is a health center providing quality healthcare services to people living in and around Ridge since 1995. The specialists diagnose and treat Lyme disease and bone infections. They also travel medicine care by providing solutions to prevent traveling illnesses abroad, such as typhoid, yellow fever, and polio.

The billing office at South Shore Infectious Diseases accepts most insurance providers to pay for their insurer’s medical services. It also has a secure online payment platform for patients to offset their bills.

The travel medicine specialists at the health facility administer Hepatitis A and B to people traveling abroad. The prevention shots are essential in preventing long-term health complications such as liver cirrhosis. 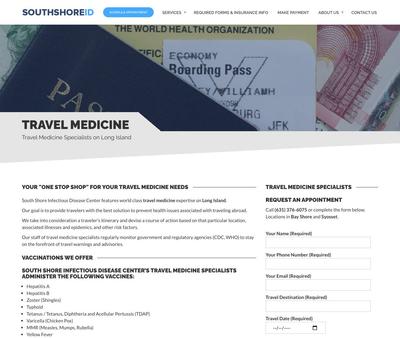 Stony Brook Medical Associates offers medical care for people living in and around Ridge in a comfortable environment. The physicians provide prevention, evaluation, diagnosis, and treatment of an array of diseases, including pneumonia, Lyme, bone and joint, and skin infections. The specialists also offer diagnostic and therapeutic care to outpatients seeking HIV care and travel consultation services.

New patients should arrive for their first appointment 15 minutes early to complete their registration. The employees at the finance office accept major insurance companies to cover the hospital and physician expenses. They also offer an online payment portal for the payment of medical bills.

The physicians at the health center evaluate, diagnose and treat people with HIV/AIDS. The infectious disease specialists also offer PrEP medications as prevention measures against HIV for high-risk individuals with multiple sexual partners or HIV-positive partners.

Patients in Stony Brook Medical Associates can access their medical records with a signed authorization to release the information. The medical center offers travel evaluations for people traveling abroad in pre-and-post travel consultations. It also provides age-appropriate vaccinations and prevention medication for travelers. 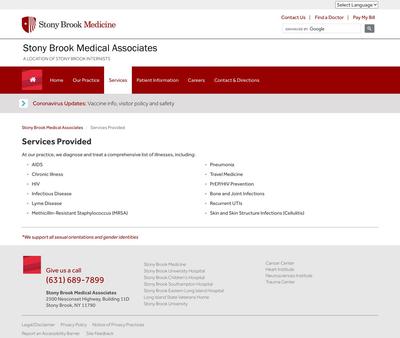 Peconic Bay Medical Center is a healthcare organization, serving the medical needs of people in eastern Suffolk County and the surrounding areas since 1951. The non-profit community health center provides quality and compassionate services such as cancer, gynecology, pediatrics, pathology, and infectious diseases that include HIV screening.

Uninsured and underinsured patients with a family income at or below 500 percent Federal Poverty Level can qualify for financial assistance. Patients can also pay their medical bills with cash, checks, and credit cards such as Visa, MasterCard, American Express. Insurance is acceptable, and those without coverage can get help in applying for one in the New York State health insurance market.

The infectious disease specialists use their experience and expertise to diagnose and treat patients with infections arising from HIV. They use their knowledge of the different medications to prescribe the best medicines for infection control to improve the health of individuals.

Peconic Bay Medical Center has a fully-accredited laboratory that performs lab tests for correct diagnosis, prognosis, treatment, and prevention of diseases. It also has board-certified gynecologists that offer state-of-the-art evaluations, wellness care, and treatment of diseases in the reproductive system. 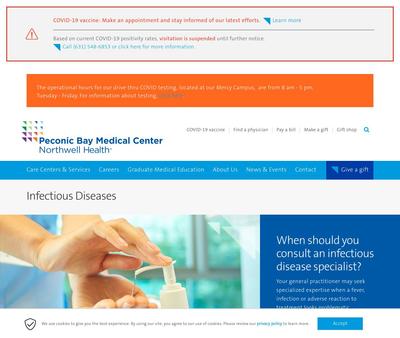 The finance staff at Westbury Family Health Center allows patients with insurance cards and co-payment to access care. It also accepts cash, checks, and credit cards as payment options. People without insurance get help to apply for insurance coverage with proof of income. A sliding fee scale is available for insured, uninsured, and underinsured based on income.

The healthcare providers at the health center offer treatment services for people diagnosed with Chlamydia, Syphilis, and Gonorrhea.

The health department is closed between 12:00 pm and 1:00 pm from Monday to Friday.