There Are 170 Public Clinics & 98 Private STD Clinics Near You

Santa Monica, California, is a glamorous site romanticized in film, but there’s nothing romantic about the STD problems sweeping across this area. Make sure the tragedies stay on the big screen and out of your sex life by getting yourself tested regularly at a clinic near you.

If you're looking for cheap std testing clinics in the Santa Monica area to get a HIV, Herpes, Chlamydia, Gonorrhea, Syphilis or Hepatitis screening for yourself or your partner, you can get tested today by selecting an option below to find an affordable std test clinic near you. Same day std testing locations also available with results in 1-2 days. Learn more here.

COMPARE TESTS AND PRICING
FIND A CLINIC IN Santa Monica

What are the STI test options in Santa Monica,CA?

Los Angeles County has seen an increase in all STDs in recent years. In SPA 5 (Beverly Hills, Brentwood, Culver City, Malibu, Pacific Palisades, Playa del Rey, Santa Monica, and Venice), the rates are lower than in the rest of Los Angeles County, but they are still too high.

Public health officials are striving for better sex education for youth, and centers are distributing condoms. Some organizations may even offer free STD testing events during STD Awareness Month. Many doctors are also prescribing PrEP to those who are at risk of catching HIV.

You can find a STD-testing clinic near you in Santa Monica and, if you can travel, there are even more options in the surrounding area.

Planned Parenthood, on 3rd Street Promenade, and Santa Monica Urgent Care, on Colorado Ave, both provide convenient STI testing. The Westside Family Health Center offers testing and treatment of most STIs, as well as counseling. You can find them on Ocean Park Blvd.

Social Service Organization. If you are uninsured, you may qualify for a state-funded program or a lower fee scale. Please bring the following documents: photo ID. Fees for services are based on your household income. You will not be turned away because of your inability to pay

Need to register as a patient. Free or low-cost HIV and STD testing. Fee for Hep and TB testing is on a sliding-scale

Must live in LA County and be under 250% of the poverty level. Walk-in HIV testing, STD testing with medical visit

Educational Organization/Institution. Testing for patients only. Please call for information. Testing services will be billed to your insurance. Assistance with enrolling in Family PACT is offered for those who are uninsured

Walk-ins are welcome at both locations

Not Sure Which Option Is Best For You? Let us point you in the right direction for STD testing in Santa Monica, CA

With rising STD rates and greater publicizing of the information, there are more people getting STD testing than there were 20 years ago. Clinics, physicians and hospitals forward the statistical and demographic data from each test performed. This protects the confidentiality of each individual client receiving the testing.

The rates are alarming and this makes it necessary for all persons who may have been exposed to STD infection to get tested to help curb the spread of these diseases throughout the region. These are merely the cases which have been diagnosed. The numbers in actuality are much higher and increased testing would no doubt bring higher rates for the population of this area. 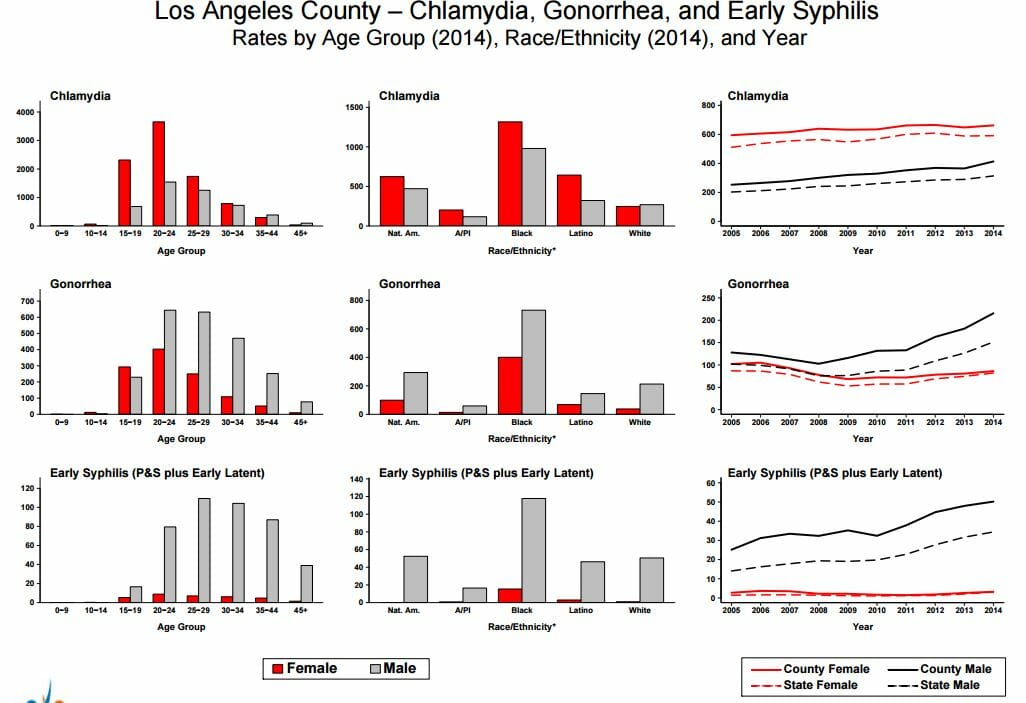 In addition to Chlamydia, Gonorrhea and Syphilis, there is also concern for Herpes, Hepatitis B and C and HIV cases. The growing concern is what has spurred the governmental initiatives to include sexual health education into the public school curriculum. Information about Herpes testing in Santa Monica as well as HIV testing is passed along with where to find available resources in the area. More people are learning about the dangers and spread of STDs at earlier ages in an attempt to better control the outbreaks.

Counseling is also available to help anyone who is affected by STD infection to understand the particulars about their condition, whether or not it can be cured, and how to properly manage any infections that are lifelong in duration. This is one of the many ways that local government is responding to the growing epidemic of STDs in the region.

Early education is considered to be among the greatest management tools because the early teen years is the time of life when the majority of young people are just starting to consider becoming sexually active. Helping them to have the required knowledge prior to exposure may help them to make better choices that are based upon facts and information.

The tally of data that has been gathered from STD clinics are other healthcare providers has yielded some interesting results. Each STD has its own particular characteristics and the data shows that each has specific group of people who are more at risk for infection. Chlamydia is most prolific in age groups of between 20 and 24 years of age for both males and females. From an ethnic standpoint, infection rates are the highest in Black people, followed by Hispanic and American Indian/Alaskan Native populations.

Syphilis rates are highest among women and lower in males. Among females, Black women comprise 48 percent of those infected, Hispanic women 38 percent and White women, 14 percent. Of the males, Hispanic men represent 49.1 percent with Black men cominng in second at 40 percent and White males at 5 percent.

These are the breakdowns of the data collected regarding STDs and the people who are affected by them. It is useful in providing a clearer picture of who may be at the highest risks. Of course anyone who is exposed can become infected. Any time that people have unprotected sexual intercourse there is a risk.

Studies also show that rates are higher for impoverished areas and for those who are less educated. In general, there are fewer options available for people who lack the finances for testing. Although there are free clinics available, these are not always available to the people who need them. Once funding for the cycle has been exhausted otherwise qualified people must wait until the funds are replenished for their round of testing. This can result in further spread of STDs. Although the local community of Santa Monica, California is doing its best to assure access for all in need, it is very much a game of numbers.

Getting STD testing in Santa Monica, CA does not have to be a long process, expensive or an embarrassing experience. Ordering STD testing is fast and it is easy. You can drop by the lab to complete your testing in 15 to 20 minutes and be out the door in no time. Your testing is kept strictly confidential and when you are done, you’ll soon have the results that will provide you with the results that you need to have. When you’re done, reward yourself by continuing on the enjoy all of the amazing sights and sounds that Santa Monica, California has to offer. Get out and mingle with the friendly locals and have the time of your life.

Other Cities Near Santa Monica, California