There Are 122 Public Clinics & 116 Private STD Clinics Near You

If you're looking for cheap std testing clinics in the Westminster area to get a HIV, Herpes, Chlamydia, Gonorrhea, Syphilis or Hepatitis screening for yourself or your partner, you can get tested today by selecting an option below to find an affordable std test clinic near you. Same day std testing locations also available with results in 1-2 days. Learn more here.

COMPARE TESTS AND PRICING
FIND A CLINIC IN Westminster

What are the STI test options in Westminster,CA?

Located in northern Orange County in California, Westminster is known for its large population of Vietnamese immigrants who live in the Little Saigon area of the city. Residents enjoy visits to Seal Beach, Garden Grove, Huntington Beach, and Fountain Valley.

The city has a population of approximately 91,564 people. Residents enjoy plenty of sunshine and trips to the beach but are also seeing an increase in sexually transmitted diseases.

In Orange County, there are plenty of places for residents to visit to obtain screenings for sexually transmitted diseases and infections. Several clinics offer free STD testing, although there is a downside to tests with no charge. It is sometimes difficult for people to get an appointment at free clinics and there can be unforeseen charges for treatment if a disease is found.

The Planned Parenthood – Westminster Health Center offers screenings for all types of sexually transmitted diseases along with contraception, free condoms, and the morning after pill. Down the street is the Orange County Public Health Agency that offers both an STD clinic and an HIV clinic at various times throughout the week. Some clinics, such as Planned Parenthood, will base fees on people’s income and ability to pay while others accept many types of insurance policies.

Social Service Organization. If you are uninsured, you may qualify for a state-funded program or a lower fee scale. Please bring the following documents: photo ID. Fees for services are based on your household income. Please bring proof of income when you arrive for your visit. You will not be turned away because of your inability to pay

No immigration inquiries or requirements. Need to register as a patient

With qualification for Family PACT

Social Service Organization. If you are uninsured, you may qualify for a state-funded program or a lower fee scale. Please bring the following documents: photo ID. Fees for services are based on your household income. Please bring proof of income when you arrive for your visit. You will not be turned away because of your inability to pay

No other STDs/Vaccines. Free male and female condoms available

Not Sure Which Option Is Best For You? Let us point you in the right direction for STD testing in Westminster, CA

Please use the map to find a public clinic in Westminster, California
GO TO CLINIC LISTINGS ABOVE
0
People, On Average, Visit This Site From California Every Month
0
People from California, On Average, Take Action For Their Sexual Health

Statistics reported is based on publicly available data sources such as CDC for Orange County, CA. Data is normalized to accurately report Orange County STD Breakdown.

Statistics recently released by the CDC and Orange County Health Department indicate that the STD rates for the suburb and LA metro area have been steadily rising for the past twenty years. While pushes for regular testing have kept these statistics below state averages, the fact that the percentage of residents infected each year keeps climbing indicates that more needs to be done.

Chlamydia and Gonorrhea rates are rising in men and women, especially in young adults ages 20 to 24. African American males are seeing a significant increase in the number of Gonorrhea incidents reported each year, and the statistics show that this trend is likely to continue. HIV/AIDS rates are also increasing, which is surprising to some considering the number of new cases reported each year was declining according to 2009 statistics.

What is really alarming to health officials and local leaders is the sharp spike in primary and secondary Syphilis incidents. Since 2012 the number of cases reported in men has nearly doubled, though the rate has remained basically unchanged in women. This startling climb in infectious Syphilis rates is being viewed by many as a strong indication that sexually transmitted diseases are on the rise, and that everyone is potentially at risk.

If residents of this community do not start taking responsibility for their sexual health, the rate of infection for the area could soon surpass state averages. Some of the statistics that highlight this growing problem include, 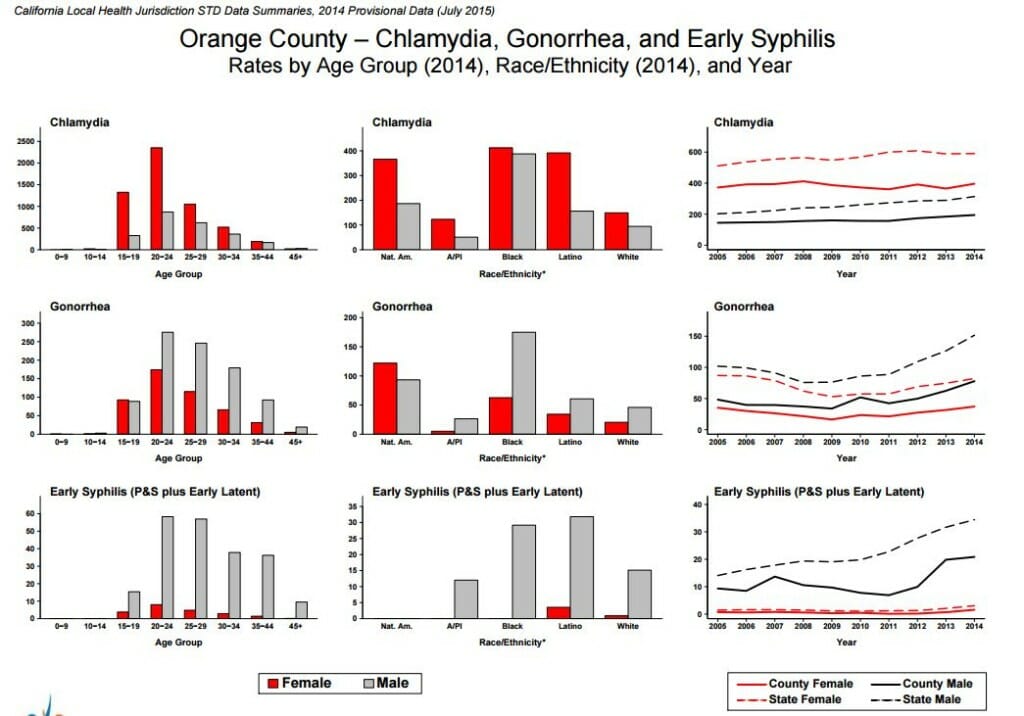 In response to the alarming rise in STD rates the state has now made it mandatory for all public school districts to include comprehensive sex education classes in their curriculum.

While current and medically accurate information on HIV/AIDS is already required in all public primary and secondary school systems the new law provides set guidelines regarding all sexually transmitted diseases, and how they can be spread. Abstinence is no longer taught as an effective means of prevention, though students will learn that simply refraining from sexual activity is the best way to avoid unplanned pregnancy.

The importance of always using condoms is now covered in the new program, which went into effect in January of 2016. Students will learn how to use the prophylactics properly, and find that condoms are more readily available. With teen pregnancy and STD rates rising among high school students, state law makers are hopeful that this will be a step towards lowering these percentages.

One of the most important changes to the current sex education classes is that students will learn how important it is to be tested for STIs. Regular Herpes testing in Westminster is encouraged in hopes that it will start to lower the infection rate in area high schools. Regular HIV testing in Westminster is also covered, along with the fact that it is the only way to positively detect the disease.

This small metro community has a unique demographical makeup, which is contributing to its rising STD rate. Mixed in with Caucasian and African Americans, is the largest concentration of Vietnamese Americans in the U.S. While this does give the city its colorful flair, it is also making it difficult for health officials to stress the importance of regular STD testing.

The sweeping changes recently made to the state’s sex education program hopes to address some of these problems, especially since students are now required to participate unless parents specifically request that their child be “opted out”. With the information students need to protect themselves now easily available, local officials are hopeful that this will soon translate into lower STD rates.

The suburb’s close proximity to LA is also affecting STD percentages. A majority of residents work and play in the city, and this is increasing their risk for contracting any of the sexually transmitted diseases. While long lines at the STI clinics are a problem, it is still important for everyone’s sexual health for residents to get tested on a regular basis.

Before heading over to Huntington Beach to catch the Surf City USA Airshow or into the city for a day of shopping and sightseeing, it is important for residents to take a few minutes and think about their sexual health. STDs are on the rise, which means that everyone should be getting tested on a regular basis. If you have been avoiding the simple procedure due to long lines at the clinics there is a faster and easier way to get tested. Now with one simple phone call you can schedule confidential STD testing and only spend a few minutes at a conveniently located lab.

Other Cities Near Westminster, California