There Are 155 Public Clinics & 37 Private STD Clinics Near You

If you're looking for cheap std testing clinics in the Hazel Crest area to get a HIV, Herpes, Chlamydia, Gonorrhea, Syphilis or Hepatitis screening for yourself or your partner, you can get tested today by selecting an option below to find an affordable std test clinic near you.
Same day std testing locations also available with results in 1-2 days. Learn more here.

There Are 155 Public Clinics & 37 Private STD Clinics Near You

If you're looking for cheap std testing clinics in the Hazel Crest area to get a HIV, Herpes, Chlamydia, Gonorrhea, Syphilis or Hepatitis screening for yourself or your partner, you can get tested today by selecting an option below to find an affordable std test clinic near you.

Questions about STD Testing?
Call at 1-800-666-1250 ( 8AM-5PM MON-FRI )
Call at 1-800-666-1250 ( 8AM-5PM MON-FRI )
COMPARE TESTS AND PRICING FIND A CLINIC IN Hazel Crest
DISCLAIMER
Safer STD Testing is an informational referral website. It refers customers to nationally reputed private STD Testing service providers (“Preferred Service Providers” or “Advertisers”). Safer STD Testing is not a medical or healthcare professional facility or a provider of any medical or healthcare services. Safer STD Testing gets compensated on net purchase of products or services by our users referred to such Preferred Service Providers. Click here to read our full disclaimer.

What are the STI test options in Hazel Crest,IL?

Conversely, local health officials noted a significant expansion in the rate of Gonorrhea transmissions from 2,130 new infections in 2015, occurring at a rate of 93.7 to 2,941 positively diagnosed cases in 2017, prevailing at a rate of 129.4.

Public health administrators in Cook County have been preventing the further spread of HIV/STDs through condom distribution programs and outreach campaigns that emphasize regular screening as a form of HIV/STD prevention. They’ve also been providing expedited partner therapy, improving access to care for HIV positive individuals, and distributing prevention education materials that focus on sensitizing the youth on safer sex practices.

You can receive screening, treatment, and preventative options for HIV/STDs at the Will County Health Department, Planned Parenthood - Flossmoor Health Center, On Dmed Urgent Care (Homewood), and the Illinois Health Clinics.

Some clinics offer free STD testing, but the tests may not be comprehensive. Also, you may need to seek prescription medications elsewhere if you test positive.

Description: Community Based Organization. Testing for high risk individuals only. Free condoms available. To schedule an HIV testing, STI, or HCV appointment or to receive for more information, please call: (708) 248-6166

Description: Need to register as a patient. Open every 4th Saturday of each month from 8 am-12noon

Any resident of Illinois may be eligible to receive HIV/STD screening and treatment services at a low cost, with some people qualifying for a sliding fee scale. You should carry your photo ID, insurance card, or proof of income if uninsured and need financial assistance.

HIV/STD-positive persons can get medication to help them manage or treat the infection. Additionally, HIV-positive persons may receive counseling and linkage to social support groups. On the other hand, you may get prevention supplies if you test negative for HIV/STDs.

The healthcare staff ensures community members can access quality healthcare services. While it may attend to you if you walk in, the team encourages appointments to avoid inconveniences. You can call the physicians to schedule an appointment or learn about the waiting times. 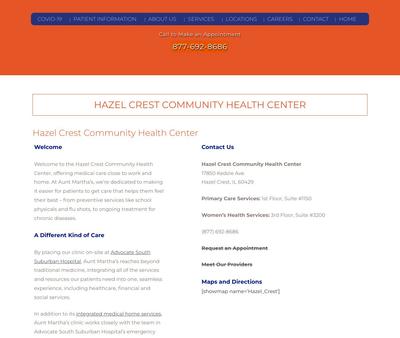 Proactive Community Services (PCS) was established in 2005 to provide community-focused health services to the under-resourced and disadvantaged communities of South Cook County. The clinical staff runs a community health and wellness program that offers comprehensive HIV and STD screening services. While HIV and Hepatitis C test results may take 15-20 minutes, other STDs could take three days.

Disadvantaged and underserved members of South Cook County may be eligible for free HIV and STI screening services. However, you may get care at a low cost if you don't qualify for free services.

HIV-positive individuals can get counseling and referrals to medical care and other social services. At the same time, STD-positive persons may receive linkage to care services. However, individuals who test negative for HIV/STDs could access preventive education or supplies.

The welcoming and friendly community health workers discharge confidential HIV/STD screening services. They help reduce health disparities and empower community members to live healthy lifestyles. Though walk-ins can receive care on Mondays from 10:30 am until 1:30 pm, the staff encourages you to book appointments. 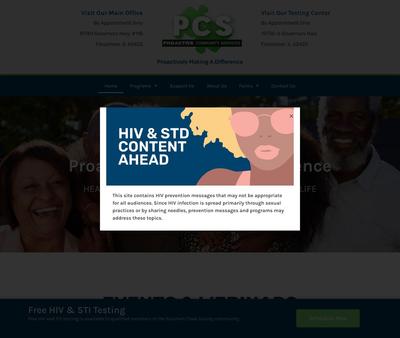 Any resident of Hazel Crest seeking HIV screening and treatment services may be eligible for free services. The healthcare team can serve you without discrimination, but you should carry a photo ID.

The friendly physicians can provide medication and therapy services to newly diagnosed persons or those searching for new clinics for HIV care services. HIV-positive persons may also receive counseling services before and after the testing process. But if you test negative, you may receive preventive services such as condoms and PrEP.

AHF Healthcare Center discharges personalized HIV medical care to control disease spread. Its compassionate and qualified staff offers comprehensive HIV screening and treatment services to improve lives and stop the spread of HIV/AIDS. You can contact the healthcare providers to schedule an appointment. 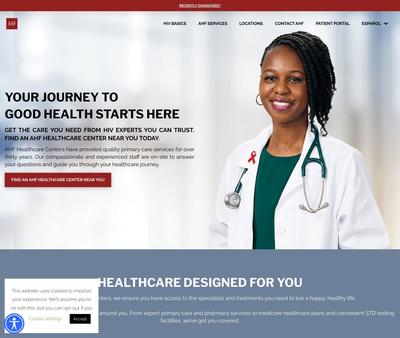 Austin STI Specialty Clinic is part of the Chicago Department of Public Health (CDPH) that delivers prevention, screening, and treatment services to the surrounding communities. It has a qualified staff that provides quality healthcare services, including confidential HIV/STI testing and treatment. The health department protects and improves the health of the Illinois community.

Any Illinois resident may qualify for free HIV/STI screening or low-cost treatment, but you might have to submit a state/school identification card or driver's license. You should carry your medical insurance card if insured. Also, the uninsured may benefit from a sliding fee scale.

Individuals who test positive for HIV/STIs can receive medication on the same day. Also, HIV-positive persons can get counseling and linkage to community support groups. However, HIV/STI-negative people may acquire prevention materials. 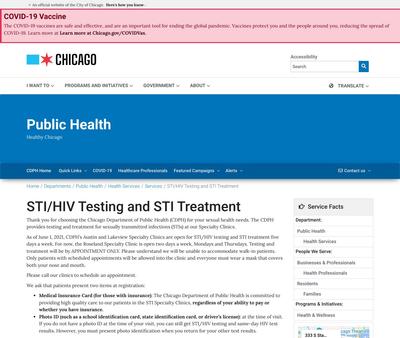