Free STD Testing in Worth, IL

There Are 177 Public Clinics & 57 Private STD Clinics Near You

If you're looking for cheap std testing clinics in the Worth area to get a HIV, Herpes, Chlamydia, Gonorrhea, Syphilis or Hepatitis screening for yourself or your partner, you can get tested today by selecting an option below to find an affordable std test clinic near you.
Same day std testing locations also available with results in 1-2 days. Learn more here.

Free STD Testing in Worth, IL

There Are 177 Public Clinics & 57 Private STD Clinics Near You

If you're looking for cheap std testing clinics in the Worth area to get a HIV, Herpes, Chlamydia, Gonorrhea, Syphilis or Hepatitis screening for yourself or your partner, you can get tested today by selecting an option below to find an affordable std test clinic near you.

Questions about STD Testing?
Call at 1-800-666-1250 ( 8AM-5PM MON-FRI )
Call at 1-800-666-1250 ( 8AM-5PM MON-FRI )
COMPARE TESTS AND PRICING FIND A CLINIC IN Worth
DISCLAIMER
Safer STD Testing is an informational referral website. It refers customers to nationally reputed private STD Testing service providers (“Preferred Service Providers” or “Advertisers”). Safer STD Testing is not a medical or healthcare professional facility or a provider of any medical or healthcare services. Safer STD Testing gets compensated on net purchase of products or services by our users referred to such Preferred Service Providers. Click here to read our full disclaimer.

What are the STI test options in Worth,IL?

Cases of different Syphilis stages were also observed in the county as 60 people were confirmed with Primary and secondary Syphilis at a rate of 3 in 2014, which almost tripled to 189 incidents at a rate of 8.3 in 2016.

Cook County Health Department works with local health clinics and organizations to create and implement STI programs to reduce the HIV and STD cases in the county. Its prevention services include teaching residents responsible sexual behaviors such as having one sexual partner, frequent STI testing, and using condoms to lower the spread of infections.

You can get a referral to care services from a clinic offering free STD testing without treatment. However, you should call before visiting the clinics because booking appointments might not be acceptable, and the hours and availability of services might not be consistent.

Description: Need to enroll as a patient in order to receive services. Mondays and Fridays are for telehealth appointments

Please use the map to find a public clinic in Worth, Illinois
GO TO CLINIC LISTINGS ABOVE
STD STATISTICS

It also coordinates substance misuse navigation and mental health case management. Rapid HIV results may be out in approximately 15 minutes, while PrEP adherence analysis results can be ready in three business days.

Free-to-low-cost HIV/STD services are accessible to all people. Patients need to schedule their preferred consultation time. However, for HIV services, no scheduled appointment, insurance, or State identification is required.

Medics provide HIV-positive patients the care they need as they navigate through the journey of viral suppression and medical treatment. They also link patients to support services.

Testing specialists refer at-risk HIV-negative clients to PrEP providers for evaluations to see if the prescription is the right option. The staff coordinates treatment either in-house or through community partners for individuals diagnosed with STDs.

The health center has a bilingual staff delivering services in English and Spanish. Free condoms and lubes are available at the clinic. Home-based testing is offered to residents in the South and West Suburbs. Also, the facility conducts off-site testing at various locations in the local community. 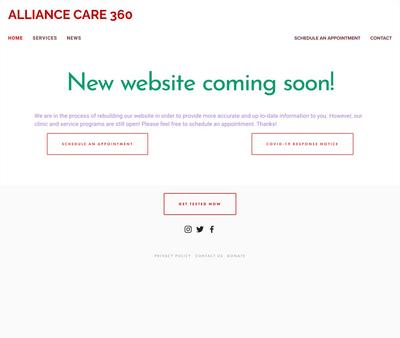 AHF Healthcare Center - Chicago delivers specialized and up-to-date care for people living with HIV. Providers at this clinic offer a comprehensive continuum of care, from diagnostics to primary care services. The physicians are also part of the team researching new HIV medications. In addition to HIV testing, The clinic may also offer STD screening.

The clinic bills medical services to major insurance plans. It is recommended for patients to schedule an appointment for in-person visits. Diagnostic services are accessible to all individuals.

Partner testing may be available upon the patient's consent. The medical professionals provide comprehensive treatment, medication, and individualized therapy to newly diagnosed HIV patients. The linkage to the care team offers PLWHA emotional support, referrals to specialists, and education about the available HIV treatment options. 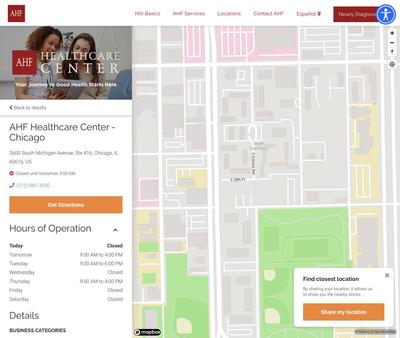 ACCESS at Gary Comer Youth Center is a community-based organization that uses a model that connects patients with resources within and beyond its reach. Services at the clinic include family medicine, preventative care, and chronic disease management for Chicago’s underserved communities. The health team provides confidential HIV testing and comprehensive care to PLWHA. Consultations on location may take nearly 40 minutes.

Patients need to schedule appointments to access medical care on-site. Same-day appointments may be available for some services. The clinic serves all public members without discrimination.

The care team works with HIV-positive to help them create the best care plan and treatment options that meet their needs. It provides linkage to support services, counseling, and referrals to specialty care. ACCESS PrEP navigators can help individuals at substantial risk of HIV infection get PrEP prescriptions. The providers also offer treatment for Hepatitis C. 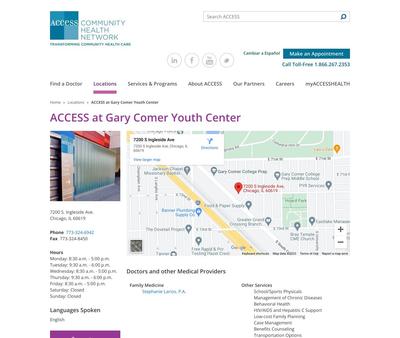 Austin STI Specialty Clinic operates under the Chicago Department of Public Health, which provides measures, health strategies, and services to ensure that Chicago emerges as a safer and healthier city. Medical providers at the clinic diagnose common sexually transmitted diseases, including HIV, and facilitate partner counseling, testing, and referral services.

You should carry a valid photo ID and your insurance card when visiting. STD testing and treatment are on an appointment basis. Patients are expected to arrive 10 minutes before their scheduled consultation time to complete the clinical paperwork. If you arrive 15 minutes late, you may be forced to reschedule your appointment. All persons are eligible for services on-site irrespective of their insurance or financial status.

Individuals diagnosed with STDs are provided with individualized treatment services. HIV-negative clients at an increased risk of contracting HIV can receive information on PrEP medication at the clinic. The medical team may refer HIV positives to primary or specialty care clinics within the local community.

Patients can pick up free condoms at the clinic. The clinical staff may vaccinate eligible individuals against vaccine-preventable infections. 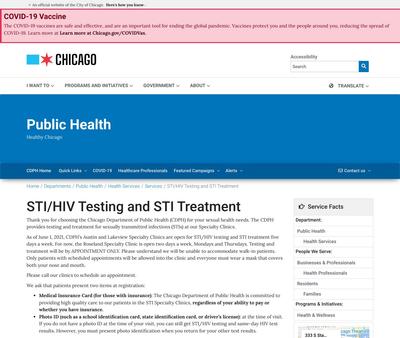